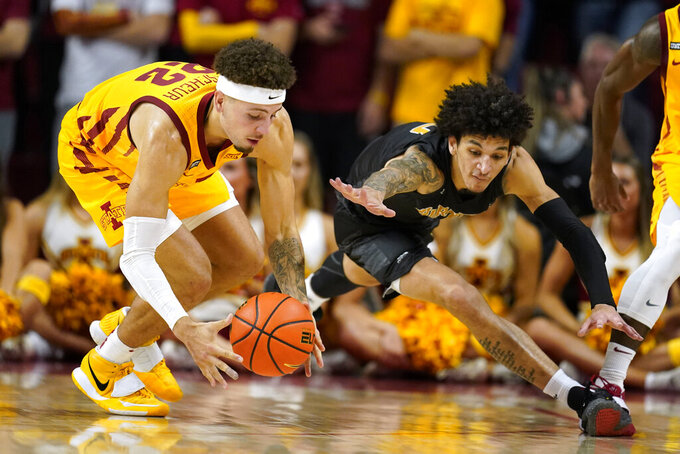 AMES, Iowa (AP) — Izaiah Brockington had 23 points and 13 rebounds, Tyrese Hunter scored nine of his 19 points in the final 96 seconds and Iowa State held on for a 68-60 win over Alabama State on Tuesday night.

Brockington grabbed an offensive rebound off a missed 3-point shot by Hunter and threw down a dunk. Hunter, on the ensuing possession, jumped into the passing lane for a steal that he took the other way and finished through contact on a fast-break dunk. His and-1 free throw pushed the lead to 61-53 with 1:36 to play.

Hunter, who finished with six assists and three steals, went 6 for 6 from the foul line from there to help secure the win.

Isaiah Range had 15 points and 10 rebounds to lead Alabama State (0-4) and Jordan O'Neal scored 12 points on 5-of-7 shooting and blocked three shots.

Trace Young scored seven points and Gerald Liddell added five in a 14-3 run that trimmed Alabama State's 12-point deficit to 56-53 with 4:50 to play. Neither team scored again until Brockington's putback with 2:02 left.

Iowa State shot 37% from the field and made just 1 of 20 from 3-point range but scored 20 points off 23 Hornets turnovers and outscored Alabama State 15-6 from the free-throw line.