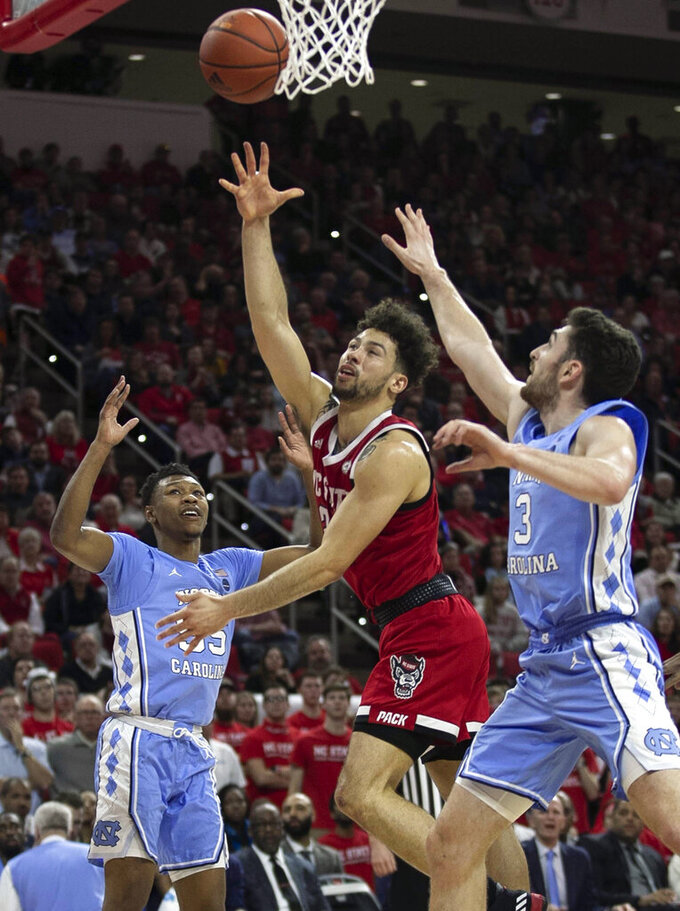 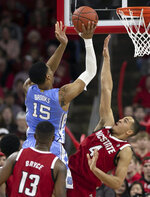 RALEIGH, N.C. (AP) — The injuries have piled up at North Carolina. So too have the losses in the roughest season of Hall of Fame coach Roy Williams' tenure with his alma mater.

And yet, the Tar Heels went to North Carolina State and celebrated again on their rival's homecourt.

Garrison Brooks had 25 points and 11 rebounds to help UNC beat N.C. State 75-65 on Monday night, earning a seventh straight road win in the longtime series between nearby schools.

The Tar Heels (10-10, 3-6 Atlantic Coast Conference) were shorthanded again with freshman star Cole Anthony still sidelined by knee surgery while senior wing Brandon Robinson was hobbled throughout this one. But when it was over, UNC was walking off the PNC Arena court just like it has every year since January 2013: with a win.

And for Williams, it was his 31st win in 35 games against the Wolfpack during his 17 years with the Tar Heels.

“No one likes winning here more than he does,” junior guard Andrew Platek said, "but we like it a lot, too.

The 6-foot-9 Brooks was dominant much of the night inside, helping UNC shoot 49% and lead by as many as 11 points after halftime. Brooks — who has taken a front-and-center role with Anthony out — made 11 of 20 shots, had six offensive boards and drew seven fouls on the Wolfpack.

“We've got to get tougher,” Keatts said. “I've got to figure out — some of my better players are not playing very good basketball, we’re not shooting the ball well.”

UNC: The Tar Heels were coming off a relief-inducing blowout win against Miami on Saturday, which earned their first victory since the start of 2020 to end a five-game losing streak. It also ended the awkwardly long wait (nearly a month) for Williams to earn his 880th career victory and pass late mentor Dean Smith for fourth on the Division I men's list. They were 3-7 with Anthony sidelined following December knee surgery, while point guard Jeremiah Francis (lingering knee issue) was out for this one. Now they've won two straight.

“We're not there yet, but we're getting there," Brooks said.

N.C. State: The Wolfpack had earned a big momentum-building win at Virginia to start last week, the program’s first in Charlottesville since 2005. But N.C. State followed that by losing to Georgia Tech for the second time this season, then suffered a frustrating loss for a fan base eager to face the Tar Heels looking as vulnerable as the tradition-rich program gets.

Robinson, coming off a career-best 29 points in the Miami win, re-injured a sprained right ankle and took a shot to the ribs. He had to leave for the locker-room tunnel three times, but kept returning and wincing his way through the final minutes.

Robinson had 11 points and went 7 for 7 at the foul line, including four in the final minute. He also needed post-game X-rays on bruised ribs, though they were negative for a fracture.

“I told Garrison: ‘Hey man, I need you to pull through for me tonight because I ain’t got it,'” Robinson said.

Leaky Black had 11 points and seven rebounds for UNC. ... Bryce hasn't made a shot in two full games after going scoreless on 0-for-4 shooting at Georgia Tech. ... Devon Daniels had 17 points for the Wolfpack. ... Graduate forward Pat Andree (6.5 points) missed his second straight game for N.C. State due to an ankle injury, while redshirt freshman Manny Bates had five blocks in his return from missing two games after taking a shot to the neck.