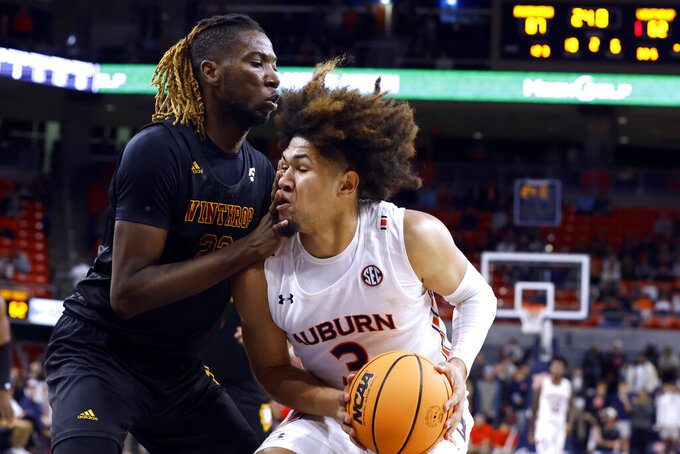 Winthrop forward Michael Moore (23) cuts off Auburn guard Tre Donaldson (3) on a drive to the basket during the second half of an NCAA college basketball game Tuesday, Nov. 15, 2022, in Auburn, Ala. (AP Photo/Butch Dill)

AUBURN, Ala. (AP) — Johni Broome and No. 13 Auburn took full advantage of their size to grab rebounds and swat away shots.

Broome had 18 points, 13 rebounds and five blocked shots to lead the Tigers to an 89-65 victory over Winthrop on Tuesday night. They gobbled up 25 offensive rebounds.

Broome took over the game four days after failing to make a basket against South Florida, helping the Tigers (3-0) put together a dominant stretch after leading the Eagles (2-2) by just 11 early in the second half.

“We knew we had a big size advantage,” said Broome, who has been nursing an ankle injury. “Coming into the game, the first play we ran was to try to get the ball inside. And everybody crashed (the boards). We just wanted to get our dominance by establishing the paint.”

Wendell Green Jr. scored 10 of his 16 points in the second half for Auburn, making 4 of 6 3-pointers. He had five assists and no turnovers. Freshman Yohan Traore scored 11 points.

“With all the upsets in college basketball, particularly with some of the mid-major teams that can really shoot it, you've got to be read to play," Tigers coach Bruce Pearl said. “The only way that team could have beaten us tonight was from 3, and we just didn't let them.”

Broome, a Morehead State transfer, rebounded from an 0-for-6 shooting performance and had all five blocks in the first half. He pulled down eight offensive boards in just 20 minutes. Dylan Cardwell also blocked four shots.

Kelton Talford had 16 points and a career-high 14 rebounds for the Eagles. Toneari Lane made three 3-pointers and scored 18. Kasen Harrison finished with 11 points.

Winthrop's No. 2 scorer, Cory Hightower, failed to score and played just 18 minutes. He went down and appeared to grab his left ankle at one point in the first half but did return and coach Mark Prosser said he believes he's “fine.”

Winthrop scored the first points of the second half to pull within 11. But Auburn scored 10 straight points in a 1:48 span to brush away the challenge, with 3-pointers from Allen Flanigan and Zep Jasper.

"I'm not sure we put our kids in the best position to be successful playing our fourth game in eight days to start the year.”

Winthrop: Picked to finish second in the Big South Conference but was outmanned by Auburn's big men. The Eagles are 3-31 against Southeastern Conference teams with 10 straight losses.

“It felt great. After watching a lot of film and practicing, I was waiting to play in a game and just compete with my brothers,” Westry said.