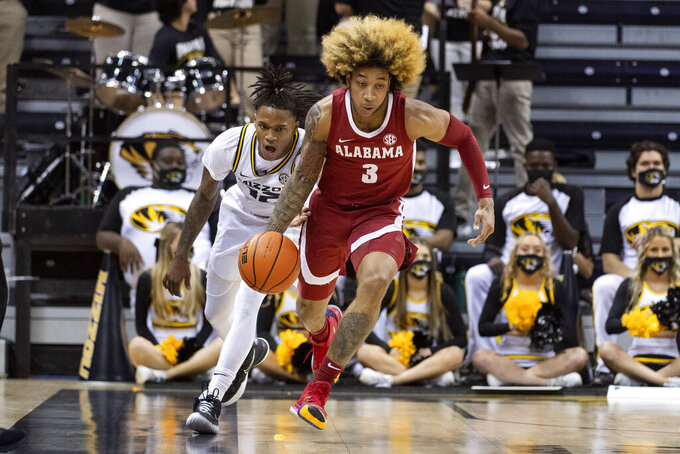 Alabama's JD Davison, right, is chased by Missouri's DaJuan Gordon, left, as he brings the ball up court during the first half of an NCAA college basketball game Saturday, Jan. 8, 2022, in Columbia, Mo. (AP Photo/L.G. Patterson)

The Tigers (7-7, 1-1 Southeastern Conference) had been 0-2 with another game postponed because of COVID-19 issues since their last victory on Dec. 18. They hadn't played since Dec. 29.

“To me, it's just another win,” Missouri coach Cuonzo Martin said. “I'm happy for our players because they put a lot of work in and that can be taxing. I'm in the fight with them so I'm happy for them.”

Jarron Coleman scored 18 points and Dajuan Gordon and Javon Pickett each had 15 for the Tigers. Brown, a junior, had his seventh career double-double.

The Crimson Tide (11-4, 2-2) got within four points with 12 seconds left, but the Tigers held off Alabama despite only making one basket in the final five minutes.

“You have to give Missouri a lot of credit,” Alabama coach Nate Oats said. “It might have been our worst defensive performance of the season. They played harder than us today. The effort was different between the two teams today it cost us the game. We’ve got to look ourselves in the eyes and play better than we did tonight.”

The Tigers had a huge second half scoring 52 points and shooting 50% from the field.

“Our guys did a tremendous job against a very talented team,” Martin said. “You have to dig deep to believe you are good enough and we did that tonight.”

The Tigers outrebounded the Crimson Tide 43-31, but Alabama outscored Missouri 46-36 in the paint.

“We got drilled on the glass and our zone didn’t really work,” Oats said.

The loss for Alabama is their fourth to unranked teams this season, but they also have several impressive wins including a win over No. 4 Gonzaga.

“All four losses we were favored, and Missouri plays hard but we should be better than them,” Oats said. “We’ve got to get better leadership and that starts with me.”

Missouri led by as many as 18 and beat Alabama at home for the third consecutive season. It was their first win against a ranked opponent since topping the Crimson Tide.

Alabama: They played well in the first half, but struggled to score to start the second half.

Missouri: For not playing in nearly two weeks, the Tigers appeared to have no rust at all.

Missouri: goes to Arkansas on Wednesday.