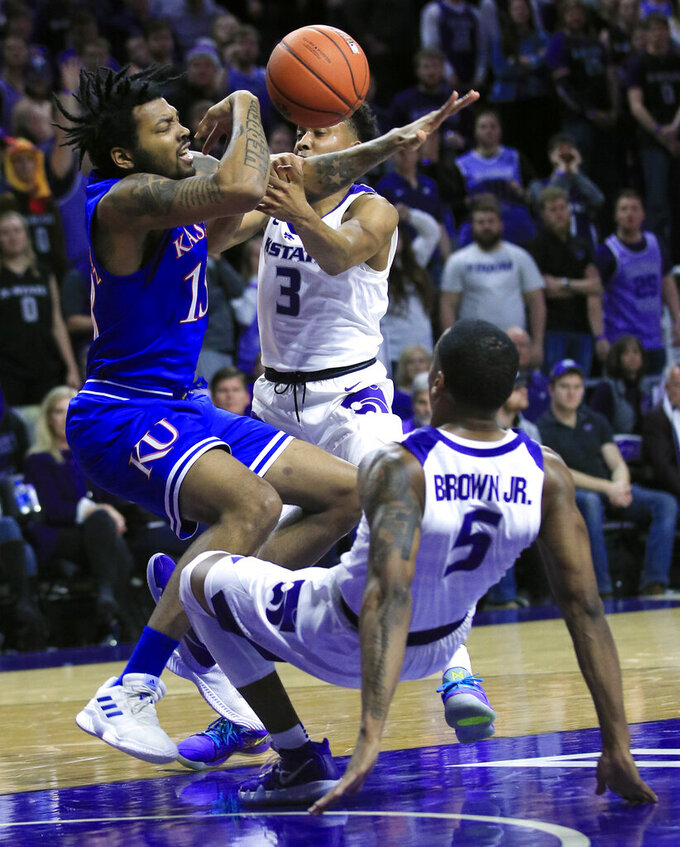 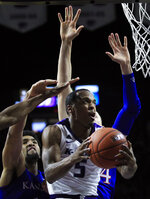 MANHATTAN, Kan. (AP) — Kamau Stokes trailed Cartier Diarra all the way to the basket, the senior guard watching right along with every Kansas State fan that squeezed into Bramlage Coliseum to see its showdown with Kansas.

He knew the springy sophomore guard would do something special.

With nobody else around him, Diarra elevated for an NBA-style windmill dunk, putting a highlight exclamation point on a 74-67 victory over the No. 13 Jayhawks on Tuesday night — one that snapped an eight-game skid against Kansas and consolidated the Wildcats' lead atop the Big 12.

"I mean, this is our first time beating Kansas since we've been here," Stokes said with a broad grin, "so it definitely means a lot for us. Staying first in the Big 12, that means a lot. So we just have to keep this momentum going."

"Just a big-time win for us, the seniors," Brown said, "and our teammates. It was a game we knew we wanted to win, not just for our seniors but for everyone — our fans, ourselves."

Dedric Lawson led the Jayhawks with 18 points and nine rebounds, but the league's leading scorer was just 6 of 15 from the floor. He also took such a physical beating in the old-school Big 12 showdown that he limped to the bench at one point in the second half.

Devon Dotson added 13 points before fouling out. The freshman also committed four of the Jayhawks 23 turnovers, continuing what has been a season-long issue with ball-handling on the road.

They're averaging 17 per game in their six losses.

"People think there's a common theme: turnovers," Kansas coach Bill Self said. "It's leadership. It's toughness. It's inexperience. There are a lot of things that go into it. We could have come over here and played great tonight and still lost. They have a great team."

Buoyed by an electric home crowd, Kansas State raced to a 14-6 lead in the opening minutes, using their league-best defense to create turnovers and breaking down the Jayhawks' man-to-man defense.

That's when Self, generally reluctant to switch defenses, went to a 2-3 zone.

It immediately slowed down the Wildcats, just as it did when Texas A&M used it so successfully in the SEC-Big 12 Challenge. Kansas slowly chipped into its deficit, then embarked on a 13-0 charge late in the first half, when the Wildcats went nearly 8 minutes without scoring a point.

The Wildcats turned once again to a defense that has held 13 opponents to 60 points or fewer this season, then turned another bushel of turnovers into easy run-outs. By the time Wade scored with 10:37 to go, the Wildcats had not only regained the lead but stretch it to eight.

Kansas chipped away again, and it looked as though Lagerald Vick would finally heat up when he buried a 3 with about 6 minutes to go. But the Wildcats finally started to make a couple free throws, and a 3 by Diarra and transition layup by Brown made it 63-56 with 3:52 left.

Vick answered with a 3 a few minutes later, and Dotson's driving layup got Kansas within 64-61 with 1:38 to go. But the veteran Wildcats maintained their poise — Sneed buried his 3 in front of his own bench, and Diarra's windmill dunk in transition put an exclamation mark on the win.

"I knew there was a great chance they'd get a little rhythm. We were hoping they wouldn't but I knew," Self said. "Give them credit. Their defense was so much better than our offense it was comical."

Kansas played its second consecutive game without sophomore Marcus Garrett, and the absence of their most experienced guard and best perimeter defender was clear. "But that's not an excuse," Self said. "Hey, we got our asses kicked."

Kansas now trails the Wildcats by 1 1/2 games in the conference race, making it an uphill battle to win a 15th consecutive title. "We can't worry about that," Lawson said. "We just worry about getting better. We're worried about winning our game on Saturday."

Kansas State has won seven straight Big 12 games, the last six of those coinciding with Wade's return from an injury. They've relied mainly on a defense that is fourth nationally in scoring, but the offense has been much sharper this past week.