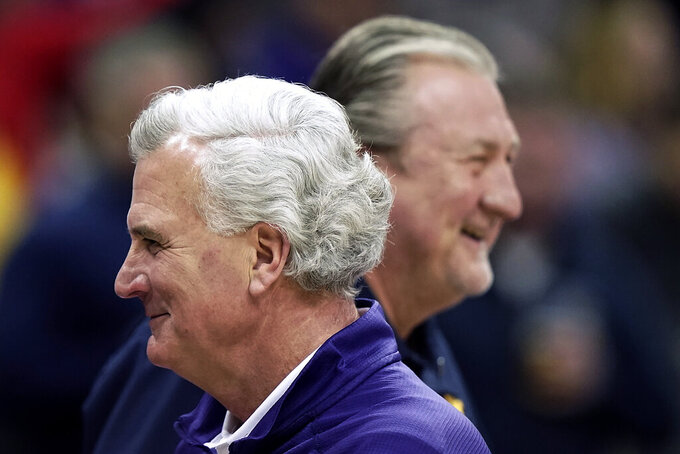 KANSAS CITY, Mo. (AP) — Bruce Weber resigned as the basketball coach at Kansas State on Thursday, one day after the struggling Wildcats lost to West Virginia in the opening round of the Big 12 Tournament to cap a third straight losing season.

He didn't walk away quietly.

First, the long-time coach criticized the NCAA over its handling of the FBI probe into college basketball corruption. Then, Weber struck out at Kansas State fans who used social media to berate him and his program. And finally, he professed his desire to continue coaching, asking for “some (athletic director) out there who would appreciate a coach that graduates players, wins championships, supports the university and embraces the community.”

“I've been preparing for this for a long time," said Weber, who had one year remaining on his contract. "I got into coaching — I got into teaching — because my dad and mom thought there was no better life than to help others. That's been my goal.

"Hopefully I've impacted people and helped them with their lives so that now they can help others.”

The 65-year-old Weber was a largely unpopular pick to replace Frank Martin when he was hired by former athletic director John Currie in 2012, shortly after he was fired by Illinois. Weber was mulling mid-major jobs when Currie selected him to take over a program that had suddenly shot to national prominence on the back of six straight 20-win seasons.

Weber kept the momentum going for a while. He led the Wildcats to a share of the Big 12 title in his first season, made five NCAA tournaments in his first seven seasons and added a share of another conference title just four years ago.

But the past few years have been a struggle, and all the hard-won support Weber had gained over most of the previous decade simply disappeared. He was forced to completely rebuild the roster after the 2019 season, then struggled to recruit at a level to get the Wildcats back to the point where they were competing for championships.

They went 9-20 last season and 14-17 this season, leaving Weber — who took the Illini to the national championship game in 2005 — with a 184–147 record with the Wildcats. His career mark, including a highly successful run at Southern Illinois that included two NCAA tourney appearances, stands at 407-301 with 13 appearances in the NCAA Tournament.

“The negativity that surrounds K-State times is really sad to me,” Weber said. “This is the only school I've been associated with that I tell our recruits to avoid our social media. I'm afraid of what they’ll see. Hopefully that can change, maybe with the new coach, and everybody can be positive about K-State and K-State athletics.”

Weber made headlines following the loss to the Mountaineers at T-Mobile Center on Wednesday night when he lambasted the NCAA over its handling of the FBI probe over the past few years. Weber said he had refused to cut his silver hair until schools that were identified in the probe were punished, which some took as a swipe at rival Kansas.

The Jayhawks have appealed their penalties to the Independent Accountability Resolution Process, while another Big 12 member — Oklahoma State — is serving a postseason ban this year.

“We won titles. We did it the right way,” Weber said. "I'm on the NCAA ethics committee. I was told they were going to take care of the people in the FBI stuff, so I told somebody I'm going to grow my hair until something happens. Obviously, it's still growing.

Yet the Wildcats will be sitting home for the third straight year, this time pondering their next head coach.

As for Weber, his immediate plans are to spend more time with his family, including four rambunctious grandkids. But it was his wife, Megan, who made sure that Weber wasn't closing the door on coaching again.

“She said, 'You're not done. Don't tell people you're retiring,'” Weber said.