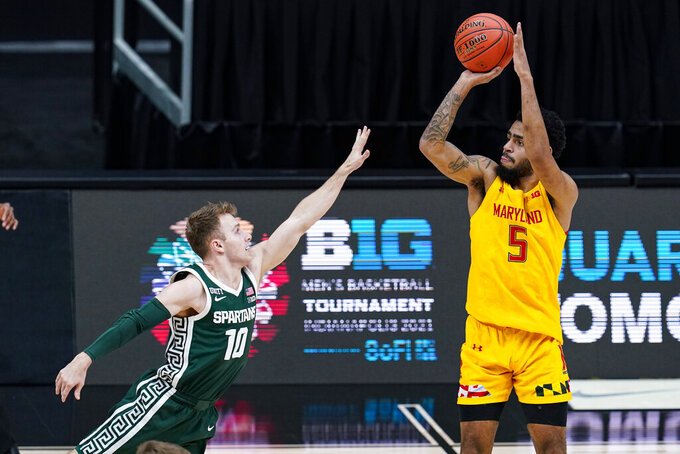 Syracuse and Michigan State, too.

All three of those teams lost in their conference tournaments Thursday, and while each has reasons to think it will be selected for the NCAA Tournament, that's now out of their hands.

Michigan State seems to be in the best shape of those teams after notching big victories over Illinois, Ohio State and Michigan toward the end of the regular season, but Tom Izzo's team was bounced from the Big Ten Tournament in a 68-57 loss to Maryland. The Spartans are seeking their 23rd straight NCAA Tournament appearance.

Syracuse had a chance to take some of the stress out of Selection Sunday with a win over top-seeded Virginia in the ACC Tournament, but the Cavaliers prevailed 72-69 on Reece Beekman's 3-pointer at the buzzer.

Boise State dropped its fourth game in a row, bowing out of the Mountain West Tournament with an 89-82 loss to Nevada.

Thursday was supposed to be the day Duke had a chance to play its way back into serious bubble conversation in a matchup against Florida State, but the Blue Devils are now done for the season. That game against the Seminoles was canceled when Duke had to pull out of the ACC Tournament because of a positive COVID-19 test.

That ends the Blue Devils’ streak of 24 consecutive NCAA appearances.

In the Mountain West, Colorado State and Utah State succeeded where Boise State failed. Those two teams advanced to the semifinals of that tournament and have a chance to keep padding their resumes at a time when several other bubble teams can't.

Drake can't feel too bad about what's happened in the past couple days. The Bulldogs have been idle since losing to Loyola Chicago in the title game of the Missouri Valley Tournament, but there have been enough struggles elsewhere on the bubble that Drake can still hold out plenty of hope for an at-large bid.

The Bulldogs will want to root for as little chaos as possible in the major conferences — Creighton winning the Big East's automatic bid would help, for example. Right now the Big 12 has held mostly to form, but teams like Georgetown and Oregon State loom as potential problems for bubble teams if either wins a surprising automatic bid in the Big East or Pac-12.

Meanwhile, the Big Ten and Southeastern Conference are both only at the quarterfinal stage, so a longshot winner in one of those tournaments could also take a spot away from a bubble team.