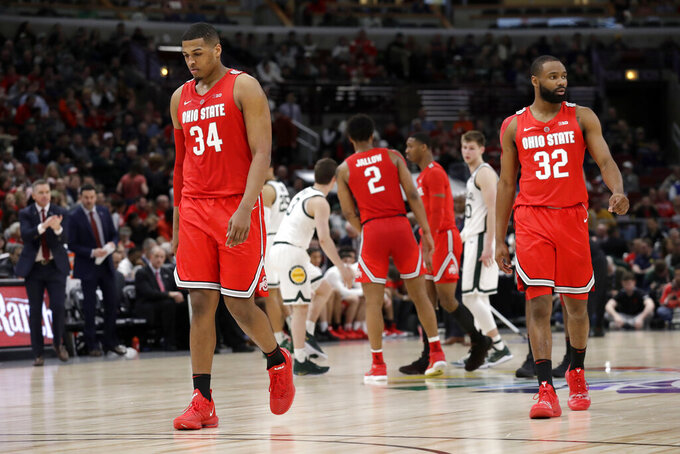 Ohio State's Kaleb Wesson (34) and Keyshawn Woods (32) react during the second half of an NCAA college basketball game against Michigan State in the quarterfinals of the Big Ten Conference tournament, Friday, March 15, 2019, in Chicago. (AP Photo/Nam Y. Huh)

Andrew Nembhard likely lifted Florida off the bubble and into the NCAA Tournament.

Nembhard's long 3 with 1.2 seconds to go pushed the Gators past top-seeded LSU 76-73 in the SEC quarterfinals on Friday. The win, which was Florida's second over the ninth-ranked Tigers this season, gave the Gators (19-14) a marquee March victory that should separate it from the likes of N.C. State, Indiana, Texas and others sweating it out this weekend.

"We all preach: One game at a time, don't think a game ahead. Stay in the moment," said Florida's Keyvontae Johnson, whose pass set up the game winner.

Florida's win might also shake up the top of the bracket. LSU (26-6) seemed to be in line for a No. 2 seed, but losing to a .500 team in SEC regular-season play while coach Will Wade was suspended could cost the Tigers.

Here's a look at the rising and falling fortunes of some bubble teams, as well as upcoming big games:

Rhode Island: The Rams (18-14) knocked off top-seeded VCU 75-70 to advance to the semifinals of the Atlantic-10 tournament. Rhode Island, whose NET ranking was 137 entering play, will need to win the A-10 to earn a bid. But if the Rams do, that's one less at-large spot available for the field. "We've been disrespected this whole year, and we're just going to go out there every night and prove that we're the best team in this conference," said URI's Jeff Dowtin, who scored 22 points on Friday.

Memphis: Playing at home has been a boon to the Tigers (21-12) who rolled past tournament-bound Central Florida 79-55 in the American quarterfinals. Memphis, which won its first two tournament games by an average of 19.5 points, will get top-seeded Houston on Saturday. The Tigers need to win out for a bid.

Xavier: It's hard to see the Musketeers (18-15) earning an at-large bid after falling to No. 25 Villanova 71-67 in overtime in the Big East semifinals. Xavier had its chances, but the tournament-tested Wildcats showed their resolve when it mattered.

Alabama: The Crimson Tide (18-15) will be sweating out Selection Sunday after getting blown by Kentucky 73-55 on Friday night, their fourth loss in five games. Alabama shot just 30.4 percent from the floor — and 11 of 38 inside the arc.

VCU: The Rams (25-7) hadn't lost in nearly two months before Rhode Island tripped them up, and as winners of 12 of their last 13 they're almost certainly a lock. VCU might have lost a seed line by losing the matinee in Brooklyn though.

Ohio State: Beating Indiana in what could have amounted to a play-in game on Thursday might have been enough to ensure that the Buckeyes (19-14) will be dancing. Getting shellacked by Michigan State on Friday might give the committee some pause about seeding though, because Ohio State was outclassed even with star Kaleb Wesson back in the lineup.

Indiana, Texas and Clemson: Those teams were knocked out of their league tournaments earlier this week and can't do anything to bolster their resume. There's no doubt that Nembhard's 3 had hearts sinking in Bloomington, Austin and beyond. Xavier and Central Michigan's late losses to tournament locks only made matters worse.