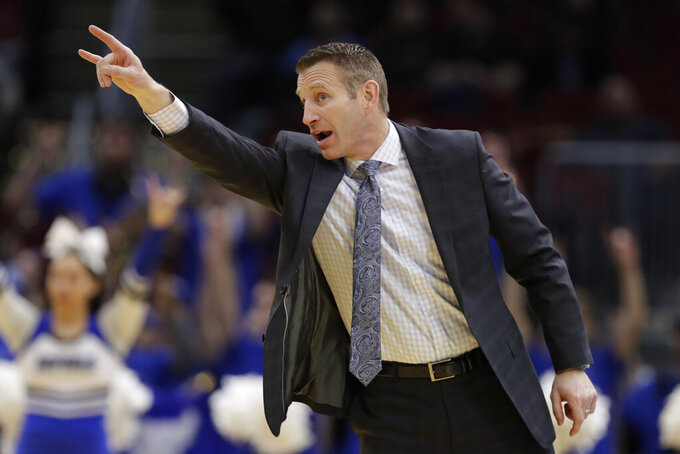 CLEVELAND (AP) — Buffalo's Nate Oats signed a five-year contract extension that will make him the top-paid coach in the Mid-American Conference.

The extension runs through the 2024 season and will pay Oats an annual salary of $837,000, the school announced Thursday, shortly after the No. 18 Bulls' 82-46 rout of Akron in the quarterfinals of the MAC tournament.

"This new contract for Nate is extremely well deserved," athletic director Mark Alnutt said in a statement released by the school. "I have been extremely impressed on how he has built this program into one that deserves national attention and respect."

The Bulls (29-3) have already set a single-season record for victories by breaking the mark set last year when they finished 27-9.

The success has raised Oats' profile and the school was eager to lock him up long term. Oats has had the Bulls in the AP's Top 25 for most of this season.

Buffalo already has done enough to earn an at-large berth in this year's NCAA Tournament, which will be the Bulls' third in four years under Oats. He was promoted to the head-coaching job after Bobby Hurley left for a job at Arizona State.

This marks the second straight year in which Oats has earned a contract extension.

Oats will make an annual base salary of $612,000, with another $225,000 to be raised through philanthropic gifts designated to the men's basketball program, the school announced. He also stands to make additional bonuses, including $25,000 for being named MAC coach of the year and another $75,000 for winning the MAC tournament championship.

"Our family and our coaching staff are extremely thankful for the appreciation shown for the job we have done," Oats said. "We love it in Buffalo and look forward to continuing to build on what we have going here."

Overall, Oats has a 92-42 record at Buffalo and is one of 11 semifinalists for the Werner Ladder Naismith national coach of the year award.