Buffaloed: No. 18 Bulls bowl over Akron in MAC quarterfinals 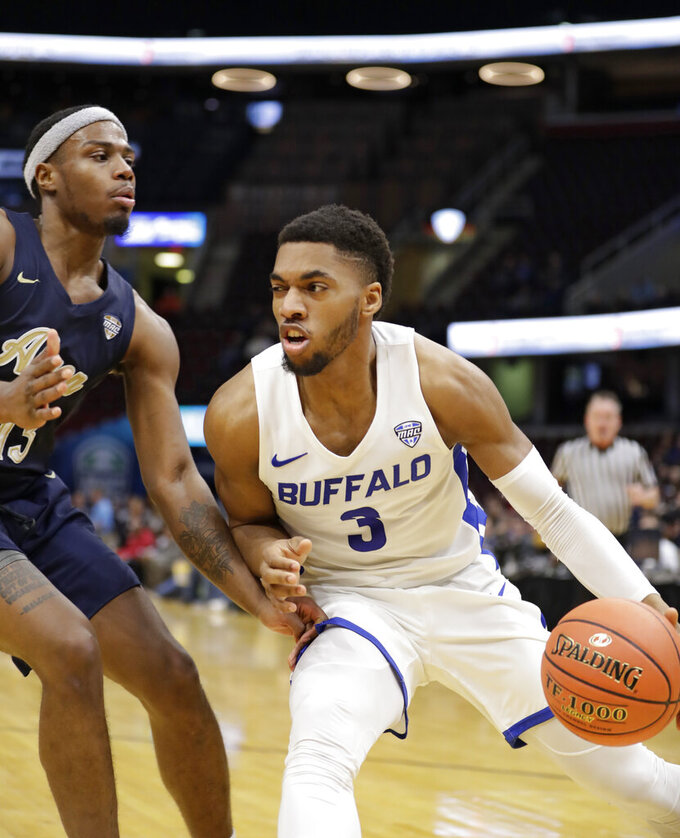 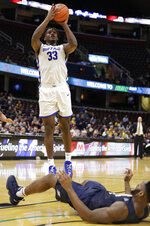 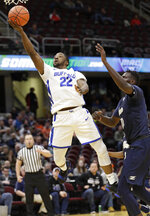 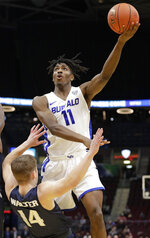 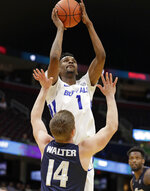 CLEVELAND (AP) — Jeremy Harris touched the blue construction worker's hard hat sitting before him on the dais and smiled.

"I'm going to sleep with it tonight," he said.

Buffalo wouldn't mind if he kept it for another month.

Harris, who recently emerged from a puzzling shooting slump, scored 23 points and Dontay Caruthers added 12 as No. 18 Buffalo impressively opened the postseason with an 82-46 win over Akron in the quarterfinals of the Mid-American Conference Tournament on Thursday.

The top-seeded Bulls (29-3), a team to watch in the upcoming NCAA Tournament, put a defensive stranglehold on Akron (17-16), built a 20-point lead in the first half, and pushed it to 30 points midway through the second half.

Buffalo, which is seeking its fourth MAC title in five years and has much bigger aspirations, will play the Kent State-Central Michigan winner in Friday's semifinals.

One of three senior starters, Harris struggled with his shot for much of February. But after getting in some extra work with coach Nate Oats, the smooth left-hander has found his touch at the right time. And just as he did in last year's MAC tourney, Harris seems to like the rims at Quicken Loans Arena.

"I just hope it's big arenas and big lights," Oats said when asked to explain Harris' comfort in Cleveland. "Because every game we play from here on out is going to be in big arenas with a lot of media coverage. He's a big-time player."

Harris didn't do well only on offense. He added eight rebounds, made several deflections and got down on the floor. The extra effort resulted in receiving the team's hard hat award, bestowed after every win.

"For the dirty work," said Oats, who signed a contract extension following the blowout.

Buffalo got just 10 points from C.J. Massinburg, the MAC's player of the year, and still rolled to its 10th straight win.

Without much fanfare, Buffalo has been one of college basketball's most consistent teams all season. The Bulls' three losses were all on the road and they pulled off wins at West Virginia and Syracuse. They've already done enough to deserve an NCAA at-large berth, but if their first performance in the MAC Tournament is any indication, the Bulls aren't going to assume anything.

And there's plenty to improve upon.

Buffalo won handily despite shooting 44 percent from the field and missing 10 free throws.

"This is a good start," Harris said. "But we can definitely play better."

Akron coach John Groce wasn't happy with the officiating. The Zips were in early foul trouble, whistled for 17 before halftime.

"It's the first game I've coached, I believe in my career, where I had two players with four fouls and two players with three fouls at halftime," he said. "I thought it really disrupted some of the rhythm. So the game was called that way. Again we had a great (officiating) crew. I know all three. They do a great job. That wasn't worth 35 to 40 points, so I don't want to come across that way."

Oats had a good postgame, too.

Moments after the Bulls ran through Akron, he met with athletic director Mark Alnutt in a quiet area inside Quicken Loans Arena and signed an extension through 2024 that will pay Oats an annual salary of $837,000. He also stands to make additional bonuses, including $25,000 for being named MAC coach of the year and another $75,000 for winning the MAC tournament championship.

Oats is in his fourth season with Buffalo, and he's helped put the Bulls on the map. The school's success, heightened by last year's NCAA Tournament upset of Arizona, has raised Oats' profile and Buffalo was eager to lock him up long term.

Oats has had the Bulls in the AP's Top 25 for most of this season.

Akron: Poor shooting in the first half doomed the Zips. They started 1 of 12 from the field and couldn't figure out a way to penetrate Buffalo's defense. ... Guard Jimond Ivey is the only senior and graduating player on the roster, so Groce will have a solid nucleus to work with next season. ... Lost seven of its last nine.

Buffalo: The Bulls are the first MAC team ranked in the AP Top 25 to play in the conference tournament since Ball State in 1989. ... The Bulls are no longer a national secret after last year's NCAA run. They'll likely be the highest seeded team in MAC history when the NCAA pairings are announced on Sunday. Miami was a No. 8 seed in 1984.

Akron: Unlikely to get an NIT bid.

Buffalo: Defeated Kent State twice and downed Central Michigan by 14 in its only matchup with the Chippewas.