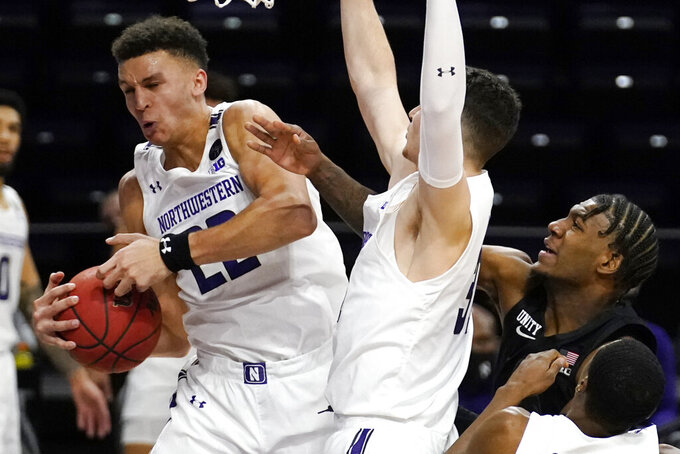 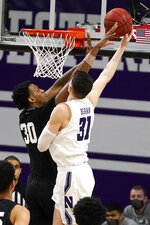 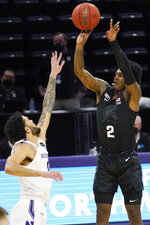 It's early yet, but the Wildcats made quite a statement Sunday night.

Boo Buie scored a career-high 30 points and Northwestern beat Michigan State for the first time in almost a decade, holding off the No. 4 Spartans for a 79-65 victory.

Pete Nance added 15 points, 12 rebounds and four assists in Northwestern's biggest win since its first NCAA Tournament appearance in 2017. Freshman Ty Berry had 12 points in the Big Ten opener for each school, including three of the Wildcats' 10 3-pointers.

“I just thought every time they tried to make a push I thought our guys just made some great plays,” Collins said.

Coming off a frustrating 8-23 season that included just three wins in the Big Ten, it was a night to savor for Buie, Nance and the rest of the Wildcats who learned some tough lessons last year.

“We're trying to change the narrative on what everybody thinks about us, that we can't finish, all this stuff,” Nance said. “We're just a really tight-knit group and we just love playing together and being out there with each other."

The Spartans looked rusty in their first game in a week and just their second overall since Dec. 7. They were supposed to play Virginia on Dec. 9, but that game was postponed because of COVID-19 issues with the Cavaliers.

“One of the more inept performances of my 26 years,” coach Tom Izzo said. “It's kind of a harsh statement. I'm blaming myself. I'm the one that has to have my team ready.”

Michigan State also had a scare when starting forward Joey Hauser left late in the first half with a left knee injury. But he returned early in the second half and finished with five points on 2-for-7 shooting.

Northwestern led by as many as 21 at 61-40 with 11:57 left. Michigan State responded with a 9-0 run, including a three-point play by Henry, but Berry steadied the Wildcats with a 3 with 8:47 remaining.

Buie hit four foul shots and a 3 in the final two minutes to help close it out. The sophomore guard went 9 for 15 from the field, including a 5-for-6 performance from beyond the arc.

“Every time I step on the court I just try to take what the game is giving me, whether that may be scoring, finding my teammates, leading or all of the above,” Buie said.

Michigan State looked rusty early on and a fired-up Northwestern team took advantage. Buie, who scored a career-high 26 points in Northwestern's 77-72 loss to Michigan State last December, hit consecutive 3-pointers to give the Wildcats a 34-23 lead with 3:34 left in the first half.

“We just didn't come to play,” Michigan State guard Joshua Langford said. “We messed up a lot of coverages defensively. We just (weren't) there as a unit overall.”

Michigan State: It was an uncharacteristic performance by the Spartans in several areas. Izzo said he can live with the poor shooting, but he called the defense and rebounding “ridiculous.” Michigan State had a 33-32 edge on the glass.

Northwestern: Nance's play at the beginning of the game helped the Wildcats get off to a solid start, and they responded every time the Spartans made a charge in the second half. Northwestern went 15 for 18 at the free-throw line for the game, compared to 5 for 10 for Michigan State.