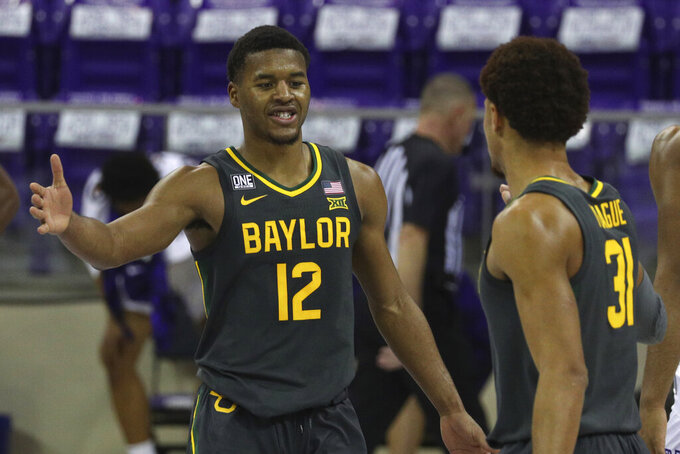 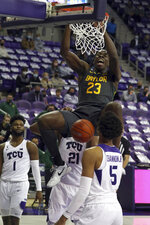 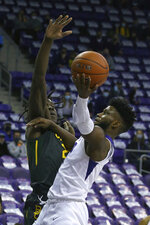 FORT WORTH, Texas (AP) — Jared Butler and No. 2 Baylor made sure TCU got no carryover from a buzzer-beating shot from about 65 feet just before halftime.

Down at the half for the first time this season, the Bears scored the first seven points after the break and went on to a 67-49 victory Saturday.

“That’s a really big thing ... to have a short memory,” Butler said. “They hit the shot at the end of the half. It definitely could be a momentum swinger, and we kind of just threw that away and said it’s a new half.”

Mike Miles had 15 of his 17 points by halftime for the Horned Frogs (9-4, 2-3), who led at halftime only because of the freshman’s highlight 3-pointer from about two-thirds of the length of the court that made it 28-27.

Mitchell made a short baseline floater on the first shot after halftime.

"Second half, they just took it took to us. They’ve got guys that have been through it and are playing well, with a lot of confidence," TCU coach Jamie Dixon said.

RJ Nembhard had 14 points and Kevin Samuel had 11 rebounds for TCU, which played consecutive home games against Top 10 opponents for the first time in school history. No. 6 Kansas beat the Frogs 93-64 last Tuesday.

Butler, the preseason AP All-America guard, rebounded from a season-low eight points on 2-of-8 shooting in Baylor's 76-61 victory over Oklahoma on Wednesday night. He was 11 of 17 from the field against TCU, with all four of his 3-pointers coming after halftime.

“Coming in, he wasn’t really worried about those last few games. Every game is new to him,” Mitchell said of Butler. "He came in and played hard. Even defensively, he was really good. He let the game come to him.”

TCU was within 45-42 midway through the second half after Nembhard's second 3-pointer in just over a minute. But Baylor then scored eight in a row, including a 3 by Butler, and led by at least nine the rest of the game.

Miles' long 3 came after Butler lost the ball on a drive to the basket when looking for the last shot of the half. Miles came away with the steal, took a few steps and then heaved the ball from near the sideline in front of the TCU bench. The ball hit low on the backboard and ricocheted through the hoop.

That was the Frogs’ first field goal since Kevin Easley put them up 19-15 with 6:58 left in the first half — matching the largest deficit this season for Baylor.

Baylor struggled on offense early, making only six of its first 21 shots in the first 15 minutes before going 19 of 34 the rest of the game. That never affected its defense.

“If you’re a team that is selfish or immature then you let those missed shots affect your defense and everything else you do, and we didn’t do that,” Baylor coach Scott Drew said. “In the second half, shots fell, and we played better.”

Baylor: The 67 points were a season low, after scoring 76 in each of their previous two games. But the Bears keep winning games. Michigan is the only other team from a Power Five conference that is undefeated.

TCU: The Frogs had won four of the previous six meetings, including the last three in Fort Worth — including 75-72 last year when Baylor was also No. 2 in the poll.

Baylor will extend its school-record streak to 19 consecutive polls ranked in the top five when the new AP Top 25 comes out Monday. Before that, the Bears had been in the top five in only 12 polls overall.

Baylor is home against No. 14 West Virginia on Tuesday night.