BYU players get assist for freeing Wade from elevator 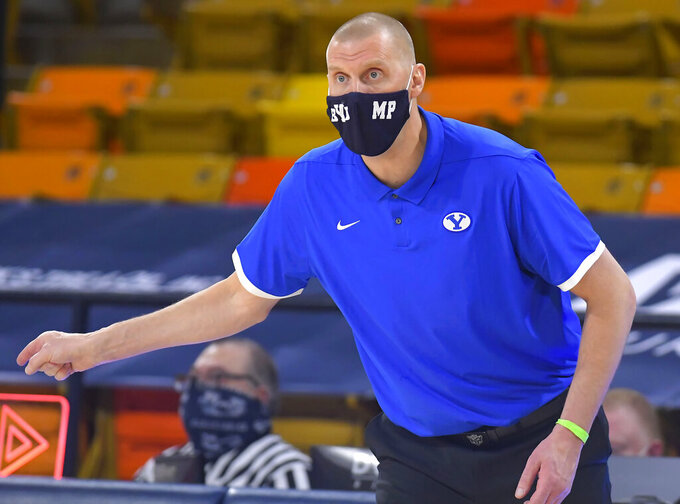 FILE - In this Saturday, Dec. 5, 2020 file photo, BYU head coach Mark Pope talks to his team during the first half of an NCAA college basketball game against Utah State in Logan, Utah. Heading into the season, there wasn't a lot of talk about No. 23. BYU. This was supposed to be a rebuilding season in Provo, Utah for coach Mark Pope and his Cougars. Guess again. BYU went 20-6 playing with a returning senior guard, three transfers and a freshman and they seemingly are getting better heading into their first NCAA Tournament since 2015.(Eli Lucero/The Herald Journal via AP, Pool)

The BYU Cougars already have the biggest assist in the NCAA Tournament and they’ve yet to play their first game.

Jesse Wade was stuck in an elevator for 40 minutes at the team’s Indianapolis hotel before his teammates forced open the doors and freed the junior guard.

The whole affair played out on Twitter Thursday night, including a video showing several teammates prying open the elevator doors and an ecstatic Wade popping out into the hallway to cheers.

“Scariest moment of my life but I knew the boys had my back,” Wade tweeted.

He also tweeted, “I’M OUT 40 minutes feels like a lifetime when you’re trapped inside an elevator. All I can say is that if you think I had it bad in there...you should see the elevator door after the boys got me out...”

Coach Mark Pope had some fun with the situation. He was on a video hookup on his phone with Wade.

“We came down to dinner and right now we’ve got a fallen soldier. Jesse Wade is stuck in the elevator,” Pope said to the sound of laughter in the background.

“It’s been about 15 minutes. It’s brutal,” Wade said. “I’m starved. My thirst isn’t being quenched. All the boys are eating yummy food without me.”

Pope said he was passing around the phone so teammates could comfort Wade.

“Hey Jesse, most of the food is gone but we’re going to save you a dinner roll,” Pope joked. “I’m kidding, man. We’ve got a big spread here for you.”

BYU, the No. 6 seed in the East Region, faces No. 11 seed UCLA on Saturday night at Hinkle Fieldhouse.

It didn’t take Mick Cronin and UCLA long to realize that playing in the NCAA Tournament as the pandemic stretches into its second year is going to be a little strange.

Consider some of the things that happened to the Bruins in their 86-80 overtime victory over Michigan State on Thursday night in a First Four game in West Lafayette, Indiana.

There was the 90-minute bus ride in miserable weather from Indianapolis to Mackey Arena in three buses, an interesting bench setup involving center Dave Singleton and a 3 a.m. celebration to cap off the night.

“Look, there’s reminders at all times, right?” Cronin said Friday in a video call. “When you go to put a guy in the game, and the game is at Purdue, they went a little in excess on the social distancing with the benches. I’m trying to put Dave Singleton in the game and he’s in the fifth row. That’s a reminder.”

The bus trip was another.

“I mean, how many times do you play a game an hour and a half from your hotel?” Cronin added. “I don’t know how far Purdue is, but when you’re on a bus you get there slower with high winds and rain. The bus driver might have been the MVP getting us to the game. I was starting to worry the way the bus was swaying on a two-lane road.”

The team didn’t get back to its hotel until nearly 3 a.m. but it had one more task. It had to add its name to the bracket board for its game on Saturday night against BYU. Senior guard Chris Smith, who is out for the season after sustaining an ACL injury against Utah on Dec. 31, had the honor.

Cronin, in his second season with the Bruins, said Smith could have chosen to stay in LA to rehab.

“But he’s remained at UCLA with his team, his trust of our medical staff to do his rehab because he wants to be around our program. So it just says a lot about our culture. Says more about Chris Smith, though,” the coach said.

BENNETT’S TIES TO THE PAST

Coaches and players cross paths all the time in college basketball, and now that Virginia has arrived in Indianapolis, coach Tony Bennett will have a situation more unique than most when his Cavaliers face Ohio in the first round on Saturday night.

The Bobcats’ third-leading scorer, Ben Vander Plas, is the son of Dean Vander Plas, one of Bennett’s teammates at Green Bay from 1988-1991. That team was coached by Bennett’s father, Dick, and the Phoenix reached the NCAA Tournament in 1991 and made two NIT appearances.

“(That) makes me feel old,” Bennett said. “Ben came to a camp here — I think he was in ninth grade — to Virginia. And I’m so happy for his success. Again, very strange when you look at it that way. Just means I’ve been coaching a while.”

“Watching Ben play, I see some of the things his dad did. His dad was so physical and had just the skill and the craftiness and know-how,” Bennett said. “And, you know, Dean will get mad at me but from what I’ve seen, Ben might be better. I don’t know, but he was a heck of a player and a heck of a teammate.”

Jordan Burns and Colgate gave No. 3 seed Arkansas a scare, taking a 14-point lead in the first half before fading in an 85-68 defeat. The senior guard and Patriot League Player of the Year couldn’t help but express pride in a postgame reflection on his career, however. The Raiders went 82-36 in his four seasons with two NCAA Tournament appearances and the conference regular-season title in 2020.

“When I first came here, nobody really knew who I was. I was just a random kid who got one offer,” the 6-foot Burns said.

Coach Matt Langel finished his 10th season at 14-2 after a late start to the schedule due to the COVID-19 pandemic. He said he’s “extremely sorry” to be losing Burns but raved about his ability to create a family atmosphere around the team.

“They high-five in practice as much as anybody I’ve ever come across,” Langel said. “That’s directly a result of Jordan and his leadership.”