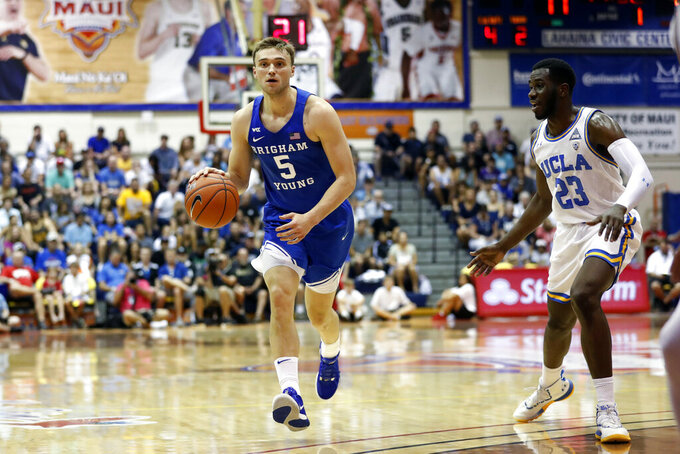 The soft rims of the Lahaina Civic Center were just what the Cougars needed.

Jake Toolson scored 20 points, TJ Haws added 15 and BYU shot past UCLA 78-63 in the opening round of the Maui Invitational on Monday night.

“It’s fun to play in this gym,” said Toolson, who was 8 of 14 from the floor. “The rims are soft, it feels like a high school gym and we feel like we can get good shots.

BYU (4-2) made up for a size disadvantage against UCLA with ball movement and good perimeter shooting. The Cougars hit 62% from the floor, 9 of 18 3s and used a pair of big runs to pull away in the second half.

Haws scored 12 of his points after halftime and Kolby Lee added 13 for BYU.

“We were trying to take great shots,” Haws said. “I thought we moved the ball really well, we made them guard us side to side, we kept our dribble alive from time to time, and guys stepped up and made big shots.”

UCLA (4-2) shot well early in both halves but went cold late to lose its second straight to a smaller-conference school.

Jules Bernard had 16 points and Cody Riley added 12 for the Bruins.

“We couldn’t finish the game,” UCLA coach Mick Cronin said. “We’re a young team, trying to figure it out, find a way. And they had a lot to do with that.”

Cronin arrived at UCLA after a successful stint at Cincinnati hoping to rebuild a program that had lost its way under previous coach Steve Alford.

The Bruins were off to a solid start before a 10-point home loss to Hofstra in their last game before heading to Maui.

Mark Pope returned to BYU following at stint at Utah Valley, taking over after his former boss, Dave Rose retired.

The Cougars have wins over Cal State Fullerton and Houston, but lost to San Diego State and Boise State with star player Yoeli Childs suspended due to paperwork issues.

Both teams shot well early once in Maui.

UCLA worked the ball inside out and cooled after a fast start, finishing the first half 13 for 29 from the floor.

BYU offset the Bruins’ size advantage by going outside and slashing, hitting 15 of 23 shots to lead 36-32.

The second half started the same way, both teams hitting shots, neither able to get much separation.

“BYU did a good job of moving the ball a lot, also driving and kicking the ball out,” Bernard said. “We started keying inside and they started kicking it out for 3s.”

BYU struggled shooting at times this season but had no such problem in the Lahaina Civic Center to earn a spot in the Maui semifinals.

UCLA was unable to use its advantages in size and athleticism, and now is headed to the loser’s side of the bracket.