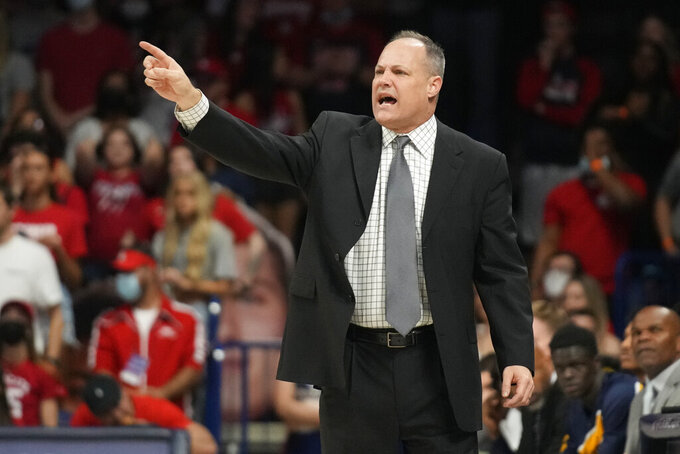 FILE - California head coach Mark Fox gestures during the first half of an NCAA college basketball game against Arizona, on March 5, 2022, in Tucson, Ariz. Between stepping into a rebuilding into a rebuilding job and dealing with COVID, Mark Fox's coaching tenure at California hasn't gotten off to the smoothest start. The Golden Bears have had three straight losing seasons under Fox and five straight overall for their longest stretch of futility in more than four decades. (AP Photo/Rick Scuteri, File)

BERKELEY, Calif. (AP) — Between stepping into a rebuilding job and dealing with COVID, Mark Fox's coaching tenure at California hasn't gotten off to the smoothest start.

The Golden Bears have had three straight losing seasons under Fox and five straight overall for their longest stretch of futility in more than four decades.

But Fox believes he could have the right pieces in place to turn things around at a school that hasn't made it to the NCAA Tournament since 2016, the second-to-last season under coach Cuonzo Martin.

“It’s finally a team that has more depth, more balance, more athleticism than we’ve had,” Fox said. “We are super excited to begin the year.”

There hasn't been much to be excited about at Cal since Martin left following the 2017 season to take the job at Missouri.

The Bears had back-to-back eight-win seasons under Wyking Jones followed by a 35-58 mark in Fox's three seasons. Cal's 51-105 (.327) record the past five seasons is the worst of any team in the six major conferences and 335th in all of Division I.

“It’s been a couple rough years but it’s not easy to win, especially in the Pac-12," said forward Lars Thiemann. "We put in the work and started to build this team. ... I think it’s time now that we show what we’ve worked for. We had a great summer, we had a great preparation, so there’s nothing stopping us.”

The Bears got a head start on the season with a trip to Europe, where they visited France, Belgium and Germany. They went 1-1 in their two games — with one getting canceled in France because of a leaky roof — and enjoyed the sightseeing as well as the 10 extra practices and exhibitions.

“It gives us a little bit of a head start on this year,” Fox said. “It helped us identify where guys are comfortable on the floor, or where maybe they aren’t quite as comfortable. We were super encouraged by a lot of things that we saw. We know there are things we have to clean up. From a basketball perspective, it was really good for us.”

Cal got some needed help at point guard through the transfer portal in adding Devin Askew from Texas and DeJuan Clayton from Hartford. They join returning starter Joel Brown, giving Fox more options than he had last year when Brown handled most of the duties.

Askew played one season at Kentucky before spending a year at Texas and has averaged 4 points and 2 assists per game, while making 23 starts.

Clayton played only two games last year before injuring his shoulder. But he averaged 13.1 points per game in five seasons at Coppin State.

The Bears also hope to get a boost in the front court with freshman Grant Newell and ND Okafor. Newell is a three-star prospect who spent a post-graduate year at the IMG Academy and appears ready to contribute right away, with Fox calling him the team's biggest surprise.

“He’s had a terrific summer," Fox said. "He really came in and from Day 1 has been impressive with how he works, how he finishes, how responsible he is. He just has a lot of positive traits, on and off the court, that just really stuck out this summer.”

Jalen Celestine underwent knee surgery in the spring after averaging 7.5 points per game last season and wasn't able to play during the Europe trip. Fox said Celestine is making good progress but it's unlikely that he will be ready when the season starts next month.

The Bears open the season on Nov. 7 against UC Davis. Their nonconference schedule features home games against Kansas State and Butler, along with the Emerald Coast Classic in Florida where they will play TCU and either Iowa or Clemson.