Calhoun leads No. 11 Seminoles over Miami 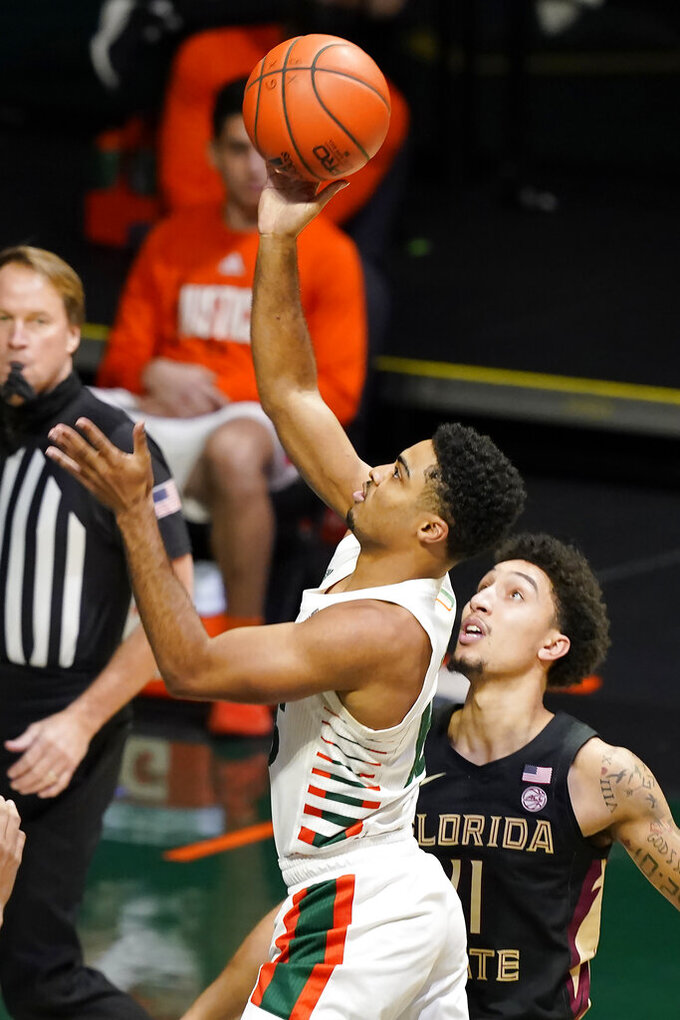 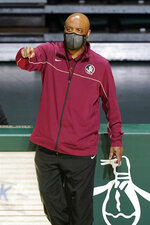 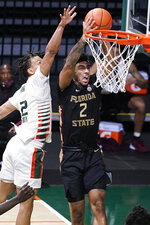 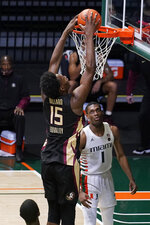 Sardaar Calhoun scored a career-high 16 points and the No. 11 Seminoles coasted to an 88-71 win over Miami on Wednesday night.

The Seminoles (14-3, 10-2 Atlantic Coast Conference) were never threatened after a 19-2 run early in the first half. Anthony Polite hit consecutive 3-pointers and Scottie Barnes’ jumper with 10:32 remaining capped the surge and increased Florida State’s lead to 27-8.

RaiQuan Gray had 12 points and 13 rebounds for the conference leading Seminoles, who have won nine of their last 10. Polite finished with 12 points and Balsa Koprivica was Florida State’s fourth double figure scorer with 13 points.

Barnes’ field goal with 40 seconds remaining gave the Seminoles a 49-28 lead at halftime.

“We’re staying focused on things that have gotten us to this point,” Florida State coach Leonard Hamilton said. “We really haven't done yet on paper. We’re the leader, but if we don’t take care of business, that can change. We’re trying to deal with things matter of fact.”

“Our guys gave it everything they had,” Miami coach Jim Larranaga said. “Our effort from start to finish was good. We’re just worn out completely. And we played against a Florida State team that I think is as talented as any team in the country. I think they’ve got a legitimate chance to win not only the ACC regular season, but the ACC tournament and the NCAA tournament.”

Florida State leading scorer M.J. Walker sat out because of a mild ankle injury. Walker, who averages 13.1 points per game, is seven points shy of 1,000 in his Seminoles career.

The Seminoles also lost forward Malik Osborne after he injured his left ankle while grabbing a rebound early in the first half.

“When you see where we are, for a kid to take a step back for a game and hopefully be strong enough to finish the season, we take advantage of it,” Hamilton said of the decision to rest Walker.

Although pleased with his point output, Calhoun understands other responsibilities that come with being a reserve. Walker’s absence provided additional minutes for a second unit which scored 57 points.

“At practice we bring the extra juice, that second unit," Calhoun said. “I cherish coming off the bench helping my brothers. When we play hard easy buckets happen.”

Under normal circumstances Gray would have spotted family and friends in the stands when playing at Miami. But Gray, of neighboring Fort Lauderdale, always enjoys returning home to South Florida, empty arena notwithstanding.

“It’s always a cool thing to come back and play in South Florida,” Gray said. “It’s kind of a dream come true to play in this arena and pull out a win.”

The Seminoles didn’t allow Miami to pull within single digits in the second half. The Hurricanes got no closer than 15 points, when walk-on guard Willie Herenton hit a 3-pointer with 2:17 remaining.

“This team is unselfish,” Hamilton said. “They play for each other. That’s one of the reasons we’re in the position we’re in.”

Miami: After close single-digit losses early in their conference schedule, the Hurricanes are trending toward lopsided results. The defeat against Florida State was Miami’s third straight by double figures.

Miami: the Hurricanes open a two-game road set Saturday at Clemson and attempt to overcome a 66-65 home loss against the Tigers Jan. 2.