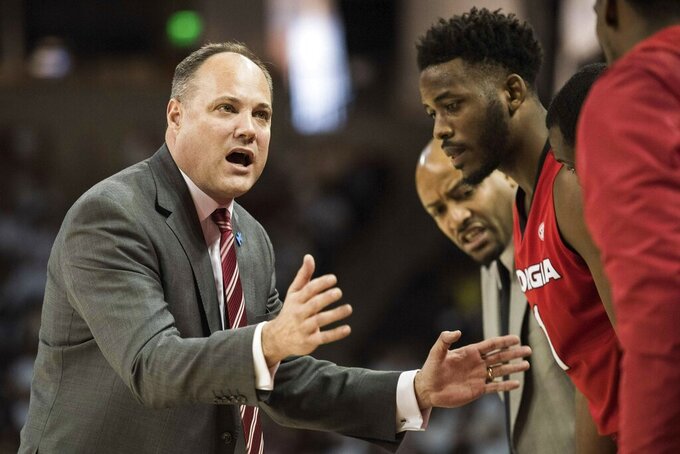 FILE - In this Saturday, Feb. 4, 2017 file photo, Georgia head coach Mark Fox communicates with players during the first half of an NCAA college basketball game against South Carolina in Columbia, S.C. California has hired Mark Fox as its new men's basketball coach. A person familiar with the hiring said on Friday, March, 29, 2019 that Fox got the job five days after Wyking Jones was fired. The person spoke on condition of anonymity because the school had not made a formal announcement. Stadium first reported that Fox would get the job. (AP Photo/Sean Rayford, File)

Fox had a 286-176 record in 14 seasons as coach at Nevada and Georgia. He made the NCAA Tournament five times but never advanced to the Sweet 16. Fox was fired at Georgia last year after failing to reach the tournament in each of his final three seasons with the Bulldogs.

"Mark Fox is a man of unparalleled integrity with a proven record of success as a head basketball coach," athletic director Jim Knowlton said. "He is an inspiring leader, a teacher and an exceptional communicator who has displayed a strong commitment to developing the entire student-athlete on the court and off the court. We had an exceptional pool of candidates, and through the entire process, one person clearly rose to the top. I am excited to welcome Mark to the Cal family and look forward to him leading Cal men's basketball program to new heights. We want our teams to be exceptional, and I firmly believe that Mark is the person to lead us there."

Jones was fired Sunday after back-to-back eight-win seasons at Cal. The Golden Bears had a 16-47 record during his tenure for the worst two-season stretch in school history and also had a school-record 16-game losing streak this year before winning the final three regular season games in the Pac-12.

The 50-year-old Fox got his head coaching career started at Nevada in 2004. He made the NCAA Tournament in each of his first three seasons and advanced to the second round twice during that time. He won at least 20 games each season and had a 123-43 record when Georgia lured him away in 2009.

He made the tournament in his second year with the Bulldogs in 2011 and then again in 2015. But he lost in the first round each time and then struggled to a 57-44 record in his final three years there.

"Early in my coaching career, I had the privilege to spend time with coach Pete Newell," Fox said of the coach who led Cal to the national title in 1959. "It will be my honor to lead the Bears on the court gracing his name. The lineage of greatness of the Pac-12 offers a tremendous platform for Cal basketball."

This is the first major hire by Knowlton, who took over the program last year. He said after firing Jones that he had a short list in place and wanted to fill the vacancy as soon as possible.

Jones won just five conference games in his two seasons at Cal, finishing last in the Pac-12 both years. Attendance fell significantly this year as fans and students grew frustrated with the direction of the program that has made one trip to the NCAA Tournament the past six years.

Cuonzo Martin lost in the first round to Hawaii in 2016, the second of his three years at Cal before leaving for Missouri. Jones was an assistant on that staff and ultimately got the head coaching job.

Jones had three years remaining on a five-year, $5 million contract.