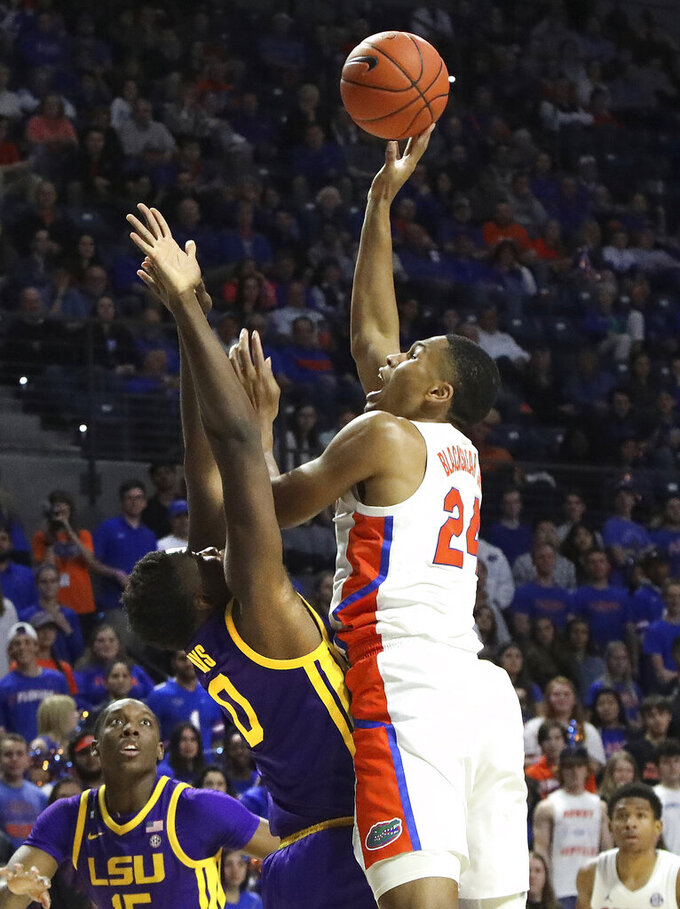 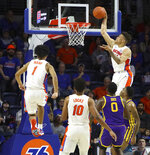 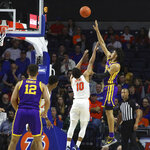 GAINESVILLE, Fla. (AP) — Florida coach Mike White challenged Keyontae Johnson before the tip, asking the sophomore forward whether he could "play hard for the seventh game in a row.”

Johnson responded with another double-double — and a career night.

Johnson had a career-high 25 points to go along with 11 rebounds — his fourth double-double in Florida’s last six games — and the Gators handed LSU its worst lost of the season, 81-66 on Wednesday night.

Johnson made 11 of 15 shots. He added a game-high five assists, two steals and two blocked shots.

“I feel like I’m gaining more confidence with each game that goes by, learning from it and trying to carry it over," Johnson said. “Everybody’s feeding off me.”

Freshman Scottie Lewis also enjoyed a career night for Florida, finishing with 18 points on 8-of-12 shooting.

“We have the capability and the pieces to win the tournament — the SEC and the NCAA Tournament," Lewis said. "He knows that if we play at the highest level, the way we know we can, there’s not too many teams that can beat us.”

The Gators (18-10, 10-5 Southeastern Conference) won for the fourth time in five games, bolstering their NCAA Tournament resume with less than three weeks remaining before Selection Sunday. Florida now has six wins against teams in the top 50 of the NCAA Evaluation Tool (NET) rankings, the primary method used to select and seed the 68-team field.

This one was as impressive as any of the others as Florida led start to finish and handed LSU (19-9, 10-5) its fourth loss in its last five on the road.

Andrew Nembhard chipped in 17 points for Florida, which shot 55% from the field and hit 9 of 21 from 3-point range.

“We got whipped in every phase of the game," LSU coach Will Wade said. "Not much else to say. We got killed. They were ready to play. Florida was ready to get to it. They beat us on the glass. They beat us to loose balls. They shot 55%. Wish I had more to tell you. We got beat everywhere.”

Emmitt Williams led the Tigers with 25 points on 10-of-12 shooting. Trendon Watford added 15.

LSU’s leading scorer, Skylar Mays, had his worst game of the season. The senior guard finished with three points on 1-of-6 shooting. There was one stretch in the first half in which he clanked a dunk, missed a wide-open 3-pointer from the corner and then whiffed on a layup.

“There wasn’t a lot of space for us to maneuver,” Wade said.

Johnson, meanwhile, dominated from the opening tip. Florida hit its first six shots and built a 12-point lead with Johnson leading the way. Wade called timeout to help his team regroup, and it seemed to work — briefly.

But nothing Wade did — changing defenses and defenders — slowed down Johnson. He made his first eight shots and finished the first half with 17 points. He added a 3-pointer on the opening drive after intermission.

“This is two straight years we haven’t been able to guard him," Wade said. "He loves when he sees the purple; he just lights up.”

Johnson’s night included several driving layups, a steal and a score, a dunk and a three-point play the old-fashioned way. It started with White's challenge.

“That gave me motivation,” Johnson said.

LSU: This was a rare lopsided loss for the Tigers, who trailed by as many as 19 points midway through the second half. Of LSU’s nine losses this season, five have been by three points or less.

Florida: Johnson notched his seventh double-double of the season, second on the team to Kerry Blackshear Jr.’s eight. They are the first Florida teammates with at least seven double-doubles in the same season since Joakim Noah and Al Horford in 2006-07.

LSU: Hosts Texas A&M on Saturday. The Tigers have won five in a row in the series, including a 89-85 victory in overtime in mid-January.

Florida: Plays at Tennessee on Saturday. The Gators have dropped three straight and four of the last five in the series.