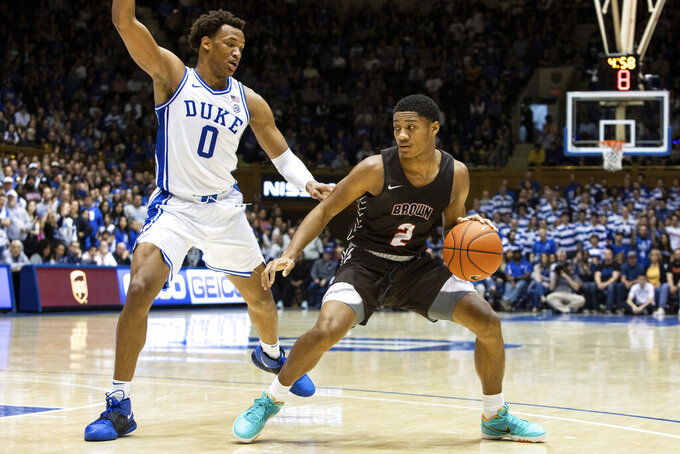 DURHAM, N.C. (AP) — First, the opponent got Duke’s attention. Then it was coach Mike Krzyzewski’s turn.

Alex O’Connell added 14 points and Wendell Moore Jr. had 10 points for Duke (11-1) in its final nonconference game of the regular season.

The Blue Devils took the lead for good with an 11-1 run midway through the first half and pulled away late in the second half with an 18-2 spurt.

Krzyzewski lit into his team during an 8-0 run by Brown in the first half. After the Bears made back-to-back 3-pointers to tie the game at 12, the Blue Devils couldn’t inbound the ball and had to call timeout because four Duke players ran to the other end of the floor.

Krzyzewski stomped his right foot in anger and quickly removed his blazer before addressing his players. Two minutes later, Duke answered with its 11-1 spurt to regain the lead.

“It’s him just wanting to get the best out of us,” Carey said. “It’s intense.”

The Blue Devils won their fifth consecutive game, all by at least 12 points, since their 150-game home winning streak against nonconference opponents ended against Stephen F. Austin on Nov. 26.

“It was a good experience for us to play in such a storied building,” Brown coach Mike Martin said. “Our approach was we wanted to appreciate this opportunity but also really compete. And I thought we competed well.”

Duke point guard Tre Jones missed his second consecutive game because of a mild sprain of his left foot. Jones is averaging 15.6 points and 7.1 assists per game.

Brown: The good news for the Bears is that they won’t have to face an opponent of Duke’s caliber for the rest of the season. They have room for improvement with their ball-handling and decision-making as they enter Ivy League play. After 18 turnovers and 11 assists against Duke, Brown has 40 more turnovers than assists this season.

Duke: It was a struggle for the Blue Devils, who aren’t as effective without Jones spearheading both their offense and defense. They gave a strong effort against Brown, especially on the offensive glass (18 of their 45 rebounds were offensive), but they struggled to convert open shots from the perimeter (2 for 16 from 3-point range).

Duke made a 3-pointer for the 1,071st consecutive game, the third longest streak in the nation, but the streak was in jeopardy late in the game. After the Blue Devils misfired on their first 13 attempts from long range, O’Connell made a 3-pointer with 6:40 left. He added another 3-pointer with 3:53 remaining to put Duke ahead 69-48.

Krzyzewski said the injury to Jones is not more serious than originally thought. Jones took part in Duke’s first workout after holiday break, running and shooting with no contact, just like his teammates did. “I just think he needs another day or two,” Krzyzewski said. “I expect him to participate in practice with contact and everything tomorrow.”

“I want to win. So, I’m going to do whatever ethically is possible to win. At 72, the fact that I can still do that and want to do it, for me, I think that’s commendable.” — Krzyzewski on his intensity during his foot-stomping timeout.

Duke: The Blue Devils complete their three-game homestand on Tuesday against Boston College.