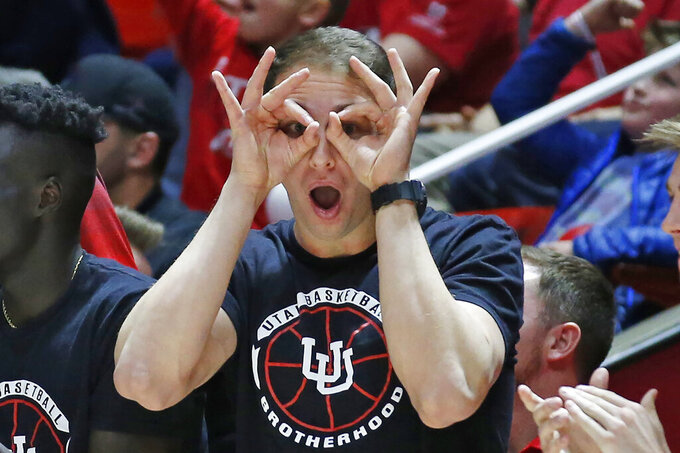 A Utah player on the bench reacts after a Utah score against Stanford in overtime during an NCAA college basketball game Thursday, Feb. 6, 2020, in Salt Lake City. (AP Photo/Rick Bowmer) 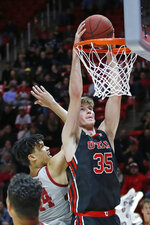 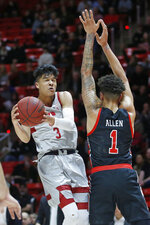 Carlson had 15 points, 10 rebounds and eight blocks to lead Utah over Stanford 64-56 in overtime on Thursday night.

Utah coaches encouraged Carlson to go after the ball whenever the Cardinal players drove to the hoop.

“Sometimes I’m more reserved," Carlson said. "Definitely, coaches want me to alter shots and block them. Tonight I was really more comfortable going after them.”

Carlson, a freshman 7-footer, posted career bests across the board and notched the third-highest blocked-shot tally in Utah history.

The Utes (13-9, 4-6 Pac-12), who also got 15 points from Timmy Allen, started fast and finished strong but struggled to score the rest of the game.

Jaxon Brenchley made a 3-pointer and then fed Carlson for a dunk to make it 59-53 in overtime and essentially clinch the win.

“My guy was closing heavy to me because I had just made that 3 and I drove baseline," Brenchley said. "I saw BC’s guy coming to me, I just dumped it off and he’s going to throw that down.”

Utah has won four straight over the Cardinal. The Utes are 9-1 at home this season.

The Cardinal paces the Pac-12 in scoring defense at 59.7 points per game — a mark that ranks seventh-best nationally — and they held the Utes to 36% shooting but managed just 35% themselves.

Utah led 26-16 with a smooth running offense before the Cardinal clamped down and Utah began self-destructing, going the final 10 minutes of the half without a field goal but still leading 28-22 at the break.

“We couldn’t hit shots. There were a bunch of turnovers, just careless mistakes,” Brenchley said.

Thanks to the Utes’ early trapping defense that seemed to surprise the Cardinal, the Utes were able to overcome their own anemic attack.

“They had a great game plan. Our pace slowed down and around the rim they were able to block some shots,” Stanford coach Jerod Haase said.

Oscar da Silva’s layup gave Stanford its first lead of the game at 45-44 as the Cardinal held the Utes scoreless for over six minutes.

“After the start, our defense was good but we need to find ways to put the ball in the basket,” Haase said.

Terry’s 3-pointer with 55 seconds to play put the Cardinal up 50-49 for their second and final lead of the game.

The clock didn’t start when the Cardinal inbounded the ball and rushed up the court. The officials whistled the play dead and, after a lengthy delay, decided to give Stanford the ball near midcourt with 1.6 seconds on the clock. Terry missed a 30-footer at the regulation buzzer.

As is the case with most young teams, Utah and its core of freshmen and sophomores plays much better at home. The Utes have only won one true road contest and only dropped one at home. But no one can figure out exactly why.

“Life on the road is tough,” Utah coach Larry Krystkowiak said. “It’s not anything mystical. … I just know a bunch of our guys play better at home for whatever reason.”

Utah’s home-court elevation at 4,657 feet may play a part.

“Sometimes the altitude gets to them,” Krystkowiak said. “Their shots at the end were coming up short.”

Stanford: Coming off a 70-60 win over then-No. 11 Oregon, the Cardinal couldn’t capitalize on another strong defensive performance. They only got to the line four times, compared to Utah’s 23 free-throw attempts and they couldn’t shoot over Carlson. Bryce Wills left with a lower leg injury at the nine-minute mark, which would be a big loss going forward if he can’t return soon.

Utah: In road losses against Southern California and UCLA, the Utes faded in the second half. The long scoreless stretches almost doomed the Utes again but a sparkling overtime performance and Carlson’s breakout game gave the Utes hope for a strong finish to the season.