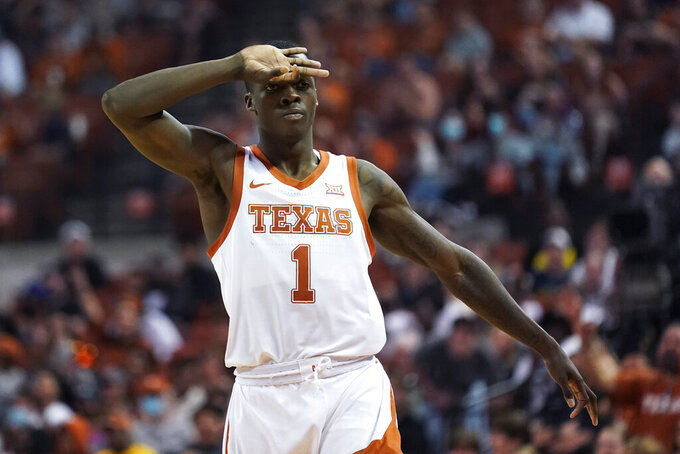 AUSTIN, Texas (AP) — Marcus Carr spent the nonconference portion of his first season at Texas becoming comfortable in coach Chris Beard's offense, trying to be a good teammate and working to create shots for others.

On Saturday, Carr was assertive looking for his own shots. Carr scored a season-best 20 points and No. 17 Texas defeated short-handed West Virginia 74-59 in the teams' Big 12 opener, snapping the Mountaineers' eight-game winning streak.

West Virginia (11-2) played without starting guard and leading scorer Taz Sherman (20.9 points per game) along with reserves Gabe Osabuohien and Kobe Johnson. All three are in COVID-19 protocols.

Against West Virginia, Carr converted 7 of 11 from the field and 4 of 5 free throws.

Jalen Bridges led West Virginia with 18 points, and Malik Curry scored 14. Sean McNeill, West Virginia's No. 2 scorer this season, had 12 points, two fewer than his average. He hit 5 of 13 shots.

“We're a much better team when we have Taz,” West Virginia coach Bob Huggins said. “Takes a lot of pressure off Sean.”

With Sherman out, McNeill played 40 minutes and Bridges 37, both on the floor more than usual.

Ramey scored 13 in the half, hitting three 3-pointers. The Longhorns converted 50% of their field-goal attempts, including 6 of 11 3-pointers, in the period.

Texas limited West Virginia to 32% accuracy in the half, forced 12 turnovers and held a 10-0 edge in points off turnovers. During the 18-2 run, Texas forced a 30-second shot clock violation and a 5-second violation on an inbounds pass.

One of the loudest crowd reactions during the game came after the 30-second clock expired.

“We do recognize what our identity is,” Carr said.

“We run around like we don't know what's going on,” Huggins said. “Hard to understand.”

West Virginia: The Mountaineers could not overcome the loss of Sherman, who ranks second in the Big 12 and 13th nationally in scoring. He had 23 points against Connecticut and 21 against Marquette. Coming in, West Virginia ranked sixth nationally in turnover margin — plus-6.7 — but ended the game with a 20-12 deficit. “We threw it to them,” Huggins said. “They didn't take it from us much.”

Texas: This was the Longhorns' best victory this season by far after losses at No. 4 Gonzaga and No. 15 Seton Hall. The Longhorns played the kind of defense, especially in the first half, that enables them to lead the nation in fewest points allowed (51.3) and to be ranked third in turnover margin (plus-7.5). “But (West Virginia) blocked nine shots today,” Beard said. “A blocked shot is kind of like a turnover.” ... Christian Bishop collected six offensive rebounds in 19 minutes for Texas.

Huggins said his players allowed Texas to spend too much time in the lane on offense, suggesting that sometimes the officials helped.

“You don’t let them drive it into the paint and pivot seven times before they find a shot,” Huggins said. “You know, you got to double (team) them in the lane or maybe get a three-second call.”

West Virginia: Hosts Kansas State on Jan. 8. A game at TCU, scheduled for Monday, was postponed.

Texas: At Kansas State on Tuesday.