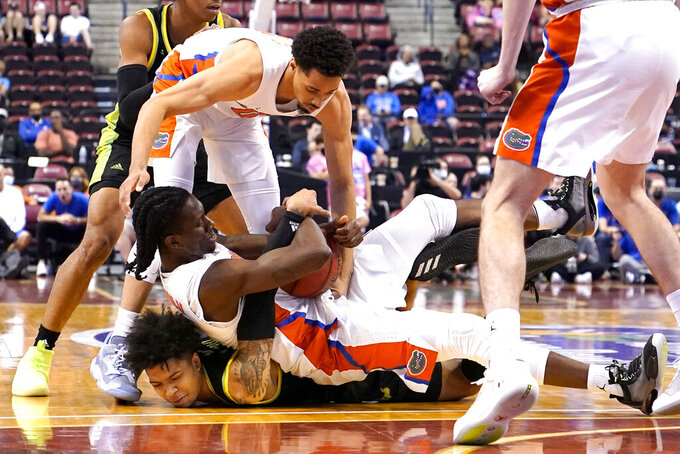 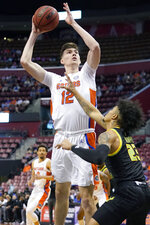 SUNRISE, Fla. (AP) — Colin Castleton scored 12 points with 11 rebounds, his fifth double-double, and Florida held off South Florida 66-55 at the the Orange Bowl Classic on Saturday.

Castleton scored nine in the second half, including a putback that showcased Florida's transition game. Phlandrous Fleming swatted away a driving layup by South Florida's Jamir Chaplin, Tyree Applebee caught the ball in the air, spun away from a defender to start the fast break. Appleby fed to Myreon Jones cutting to the basket and Castleton was there for the flush when Jones' layup rimmed out.

The win was just the second in five games this month for Florida (8-3). Fleming finished with 12 points, Anthony Duruji added 11 points and 9 rebounds, Jones scored eight with four boards. Jones hit a jumper and a 3-pointer back-to-back as Florida closed the first half on a 17-2 run.

CJ Felder turned a miss into a highlight when he soared in to collar a Jones 3-point attempt as it clanked off the back iron and threw it down for an emphatic dunk and a 16-point lead.

USF outscored Florida 16-4 over a nearly five-minute span of the second half to get within 48-45 with nine minutes remaining. Jake Boggs and Greene punctuated the rally with USF's first 3-pointers of the game after starting 0 for 6 from distance.

USF next faces BYU in Honolulu at the Diamond Head Classic on Wednesday. The Gators host Stony Brook on Wednesday before traveling to Ole Miss to kick off the SEC season.