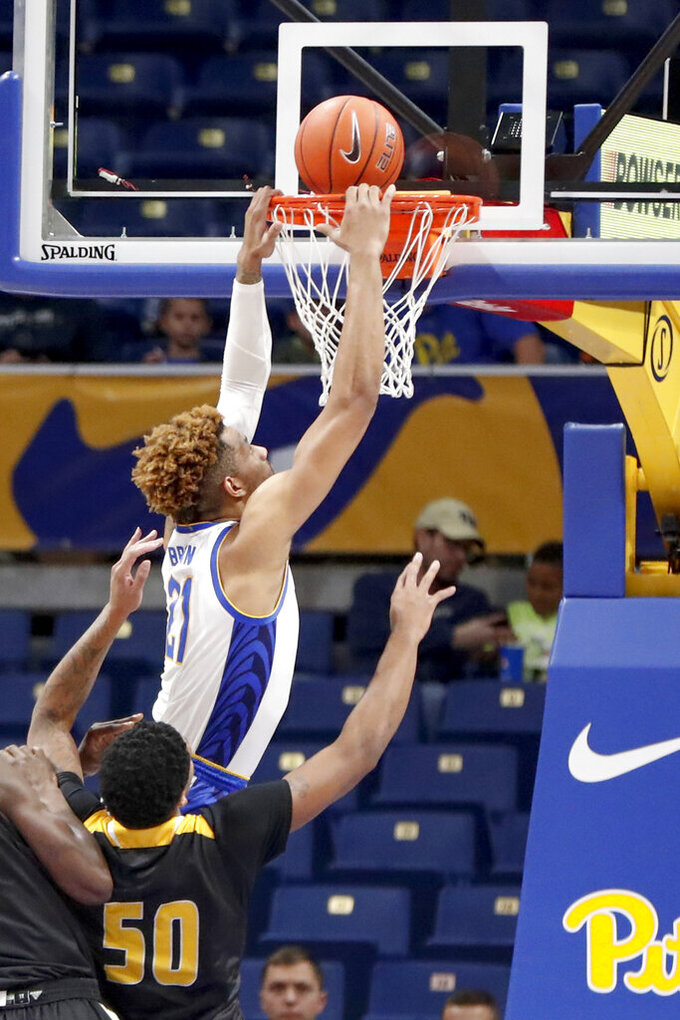 Pittsburgh's Terrell Brown (21) tries for a dunk over Arkansas-Pine Bluff's Chris Smith (50) during the first half of an NCAA college basketball game Thursday, Nov. 21, 2019, in Pittsburgh. (AP Photo/Keith Srakocic) 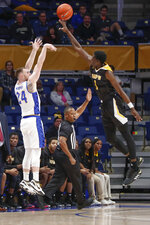 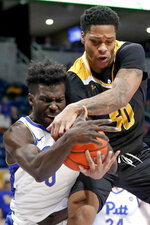 PITTSBURGH (AP) — At one point, it looked like Justin Champagnie might not have a freshman season with Pittsburgh.

Champagnie, a 6-foot-6 wing from Brooklyn, New York, suffered a knee injury in the lead-up to the season that was feared to be season ending.

But after a second opinion, he was allowed to return to the court. That’s been a very good thing for Pitt.

He has come on strong for Pitt — it was his fourth consecutive game in double figures. Against the Golden Lions, he shot 6 of 10 from the floor and grabbed five rebounds.

“We think he’s talented kid, but we want more from him,” Pitt head coach Jeff Capel said. “He’s really played well all year, but there’s a few more levels that we think he can get to and we’re going to be on him to get there.”

Champagnie did most of his work in the paint, where Pitt had a 36-20 advantage. Eric Hamilton had 12 points and eight rebounds in the first half before being limited later due to foul trouble.

Xavier Johnson scored 13 points and was a threat shooting over the Golden Lions’ zone. He was 3 of 7 from 3-point range.

The Panthers never trailed in the game, steadily grew the lead to 13 points at halftime and pulled away in the second period for the 25-point margin of victory, Pitt’s largest of the season. It was the lowest point total the Panthers allowed since holding Holy Cross to 39 points on Dec. 23, 2014.

The Lions were unable to replicate the formula that helped them give Kansas State a scare earlier in the week, mostly due to a poor first half shooting and too many turnovers. The Lions shot 23.1% in the first half and turned the ball over 22 time.

“Any time you play against a good basketball team, you can’t just turn it over like that, because they’re going to get their opportunities and score the basketball,” Arkansas Pine-Bluff head coach George Ivory said.

Arkansas-Pine Bluff, already facing an uphill climb against a high-major opponent, played without a pair of starting post players in small forward Shaun Doss and center Terrance Banyard. As a result, Ivory opened his bench, playing 13 different men in the contest.

“We are just trying to get some more guys getting used to playing some minutes that they usually wouldn’t play,” Ivory said.

Pitt had yet to completely dominate an inferior opponent through an up-and-down start to the season. After losing to Nicholls State, they had to sweat out a slow first half against Robert Morris before pulling away late.

“I just think it was like a confidence booster, in a way” Champagnie said. “At the same time, we play against harder teams. We’ve got to take this win and move on.”

Pitt was happy to play against the zone of Arkansas-Pine Bluff, because the Panthers will have two games this season with notoriously zone-heavy Syracuse. The matchup with the Golden Lions made for useful prep.

“It was a good game for us,” Johnson said. “We know we’re going to see it again. Obviously, Syracuse. This was perfect for what we’ve got to do against them.”

Arkansas-Pine Bluff: Plays its first and only home game nonconference game of the season against non-NCAA opponent Champion Christian College on Monday.

Pitt: Travels to Fort Myers, Florida, for two more games in the Fort Myers Tip-Off, the first against Kansas State on Monday.