The champs are here: Villanova wants to reign again in NYC 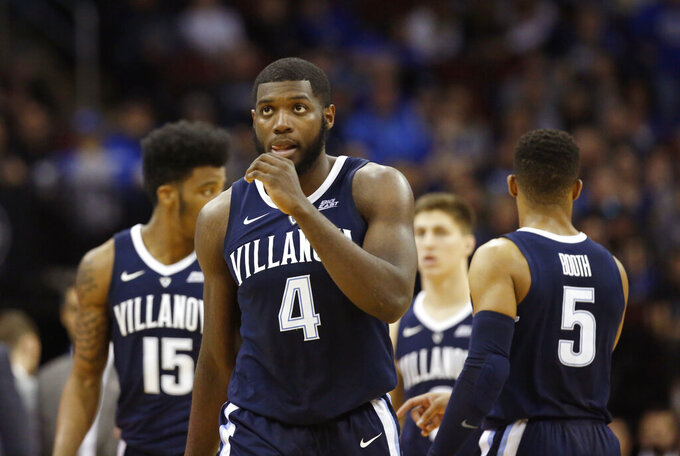 Villanova forward Eric Paschall (4) reacts as he looks at the score in the waning minutes of the second half of an NCAA college basketball game against Seton Hall, Saturday, March 9, 2019, in Newark, N.J. Seton Hall defeated Villanova 79-75. (AP Photo/Kathy Willens) 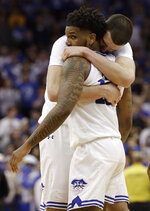 PHILADELPHIA (AP) — Villanova pulled into campus following a 100-mile ride from New Jersey still digesting a loss in the Big East finale to Seton Hall. Coach Jay Wright hit the back of the bus for his standard pep talk and detail the schedule for the week, highlighted by a date at Madison Square Garden.

His agenda should have included a peek at the out-of-town scoreboard.

While he talked, the No. 25 Wildcats were big winners — Big East champions again. The surprising title came when Georgetown knocked off Marquette as the Wildcats took a silent ride down the turnpike and again gave the national champion Wildcats the No. 1 seed in this week's conference tournament.

"When I came back to the front of the bus, for us all to get off, we found out Georgetown had won," Wright said. "We didn't even address it. We were still soaking in our performance from Saturday."

Well, soak in this: In a season where the Wildcats lost four players to the NBA, their first-year players were more bust than breathtaking and they were upset by teams they would normally romp past, Villanova is not only alive and well, it's coming for a third straight Big East Tournament title.

The Wildcats (22-9, 13-5) walk off the court flashing the "V'' sign with their fingers after each win, but for the first time in years, it could stand for vulnerable.

"We're still a work in progress but we feel good," Wright said.

This has traditionally been the time of the season when the Wildcats work toward progressing deep into the NCAA Tournament. But Wright has kept the Wildcats together, even as they:

— lost consecutive home games to Michigan and Furman; lost to Penn for the first time since 2002; and lost to five Big East teams after losing only four games all season each of the last two years.

— felt the loss of top assistant Ashley Howard to the head coach job at La Salle.

The negatives might not matter much if the Wildcats can clip down the nets at the Garden. They play on Thursday the winner of the Providence-Butler game, and the Wildcats went 4-0 against those teams.

Wright pulled off one of his best jobs on the bench, a caveat that comes with the 2016 and 2018 national championship banners hanging from the rafters, not to mention the 10th anniversary of his first Final Four in 2009.

"It was a different job," Wright said. "You never know from the outside what a team goes through in the inside. But this was a really good group. A young group. But a relatively easy group to coach."

Phil Booth, a two-time national champion, and Eric Paschall have eased the burden of a youth movement by absolutely carrying the Wildcats in the second half to big wins. The senior stars both average in the 35-minute range and are 1-2 in scoring. Wright has mostly used a seven-man rotation and let Booth and Paschall lead the way down the stretch to win critical games, turning to his reliable rotation stars rather than newbies.

"Did we develop our freshmen class as much as we'd like? No," Wright said. "But do we feel good about them going forward? Yes."

Booth, Paschall, Saddiq Bey — the only freshman who has shown flashes of productivity — Collin Gillespie and Jermaine Samuels will start. Dhamir Cosby-Roundtree and Cremo are his top two reserves off the bench.

"Everybody's career is different," Wright said. "They might not be as ready this year, but I think they will be. They'll have really good careers, all of them. They just weren't maybe as ready as some of the other guys."

The national championship repeat seems like a longshot, but against a bland Big East, those "Vs" could be flashed again from atop a ladder.