Chandler paces No. 17 Tennessee in 80-61 rout of Missouri 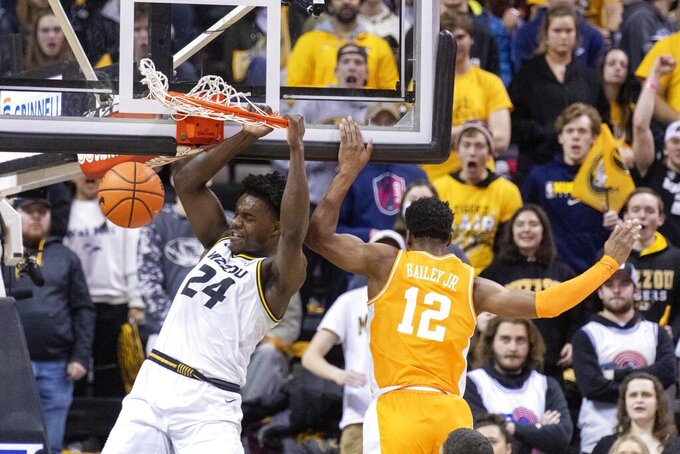 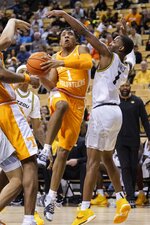 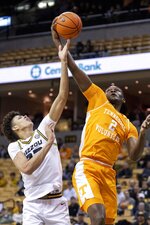 COLUMBIA, Mo. (AP) — Kennedy Chandler scored 23 points to lead No. 17 Tennessee to an 80-61 victory over Missouri on Tuesday night.

Chandler, a freshman guard averaging 13.2 points, eclipsed that average with 14 points in the first half for the Volunteers (20-7, 11-4 Southeastern Conference). The 6-foot, 172-pound Chandler was far too quick for the Tigers’ big, bulky backcourt players. He made 9 of 12 shots and added eight rebounds and six assists without a turnover.

“He has learned so much about how to move without the ball,” Tennessee coach Rick Barnes said. “He made some great cuts tonight. He’s a lethal player when he does that.”

Chandler said after he attempted an early 3-pointer, he heard Barnes’ voice in his head telling him not to settle for perimeter shots.

“Attacking is the best part of my game — attacking and getting my teammates open,” Chandler said.

Santiago Vescovi made 4 of 6 3-pointers and scored 14 points for Tennessee, which made 9 of 18 3-pointers as a team.

Tennessee’s talent barely dipped when Barnes went to his bench as the reserves had their way with Missouri. In the first half, the Volunteers outscored the Tigers 15-3 in bench points on the way to a 36-27 lead. The Tigers went more than seven minutes without a basket early in the second half as Tennessee opened a 21-point lead to put the game out of reach.

Javon Pickett led Missouri (10-18, 4-11) with 16 points, and Kobe Brown had 12 points and nine rebounds. Pickett said he hasn’t seen any lack of effort from his teammates as they’ve lost four straight games.

“We have grit,” Pickett said. “We’ve shown it plenty of times. We’ve just got to continue to bring it every game.”

Tennessee senior guard Victor Bailey Jr. had failed to score in eight SEC games — a puzzling development for a player who averaged 10.9 points last season. He had a breakout game against Missouri. Bailey scored 11 points on 5-of-8 shooting against the school where his father was a star wide receiver in the early 1990s.

“Anybody close to our program will tell you how much respect they have for him and how hard he’s continued to work,” Barnes said. “That’s a great example for everybody that you just don’t let go of that rope. Not only hold on, but keep working and keep climbing.”

Bailey said he hadn’t let his recent struggles get him down.

“I’ve done a better job this year of keeping a level head,” Bailey said. “It’s definitely good to see some shots go in, but my focus is to do whatever can help this team win.”

Tennessee: The Volunteers rank fourth in the country in steal percentage — coming up with steals on 13.9% of their opponents’ possessions — which was bad news for a turnover-prone Missouri team without a true point guard. Tennessee came up with five steals in the first half and scored nine points off turnovers to take control of the game.

Missouri: A season that has turned into a slog for coach Cuonzo Martin and the Tigers continued with a home loss in front of another sparse crowd at Mizzou Arena. After losing eight players from a team that made the NCAA Tournament in 2021, Martin’s attempt to reload with four transfers and four freshmen has fallen flat. Missouri is headed to its third losing season in Martin’s five years at the school.

Tennessee: Returns home for a Saturday game against No. 3 Auburn.