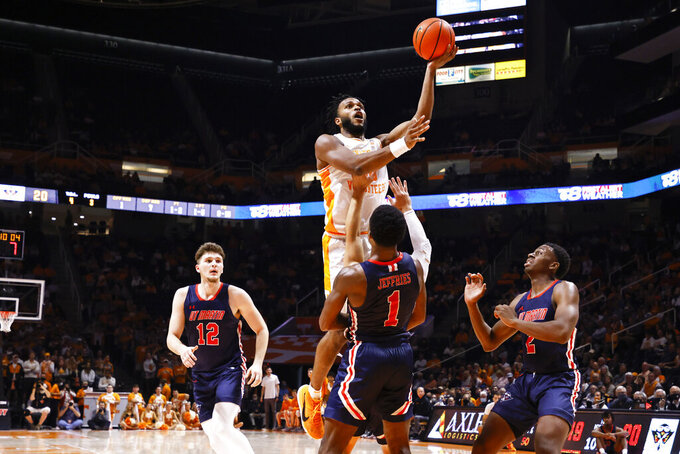 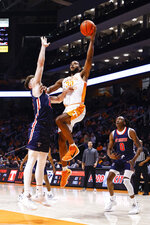 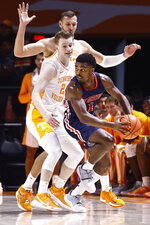 KNOXVILLE, Tenn. (AP) — Kennedy Chandler and Santiago Vescovi each scored 20 points, leading No. 18 Tennessee to a 90-62 season-opening win over Tennessee-Martin on Tuesday night.

Chandler shot 7 for 10 from the field and had four assists. Vescovi, a holdover from last season, tied a career high with six 3-pointers.

“He still needs to get in elite shape mentally. We still want to quicken the pace with him.”

Chandler was regarded as the top high school point guard in the country last year.

“I had the mindset that I'd come out and play hard,” said Chandler. “It was the first game of the season but I wasn't nervous.”

Justin Powell, a new arrival, added 13 points for the Volunteers. Olivier Nkamhoua had 11 points and 14 rebounds.

The Vols connected on 17 of 40 3-point attempts, This team will spend a lot of time on the perimeter.

Besides Vescovi, Chandler hit all four of his attempts from long distance.

“Every time we came down the court, we were ready to shoot,” Chandler said. “In the second half, we were finally able to turn the switch on.”

“There's a fine line (between a good and bad 3-pointer),” Barnes said. "We have to have an offensive rebounding mentality. There will be times when they aren't going to fall.

“At some point in time, somebody will really guard us (beyond the arc). We have to be ready for that. We have to get a feel and make the defense work a little bit.”

Tennessee led by eight, 43-35, at halftime, and then pulled away.

“We practice every day at a high tempo,” said Barnes. “(UT-Martin's) plan was to spread us out. We are going to play against (other) teams that will try and slow us down. We'll have to be prepared for that.”

Tennessee's 10-man rotation had six players who either weren't on the roster last season or played minimal minutes.

Tennessee super-senior big man John Fulkerson hasn't played in the Vols' exhibition or opener because of a broken left thumb. He is expected to be ready in the Vols' next outing Sunday. Fulkerson missed the end of last season when he was sidelined with a concussion in the Southeastern Conference Tournament.

Tennessee-Martin: The Skyhawks are building toward the Paradise Classic on Nov. 19-21 in Boca Raton, Florida. They will meet host Florida Atlantic in the first game, then follow with Troy and North Dakota.

Tennessee: Everything Tennessee does in its first two regular-season games will be done with one eye looking ahead to the Hall of Fame Classic on Nov. 20-21 in Uncasville, Connecticut. The Vols will play Villanova in the opener, then meet either North Carolina or Purdue the second day.

Tennessee: East Tennessee is up next on Tennessee's schedule for a matinee Sunday.