Changing on the fly: College hockey teams do it on, off ice 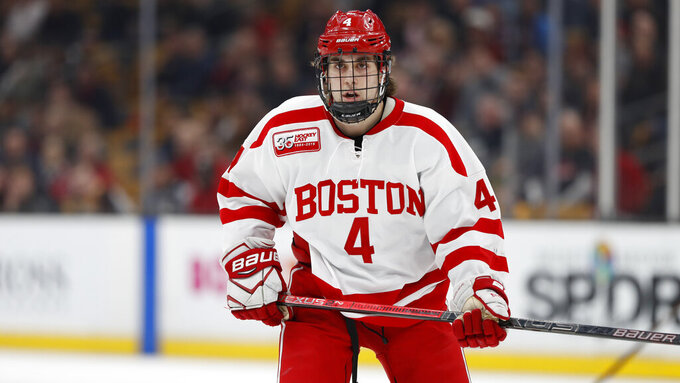 FILE - Boston University's David Farrance is shown during an NCAA college hockey game against Northeastern in Boston, in a Feb 4, 2019, file photo. On Friday night, Jan. 8, 2021, BU will become the last Division I men's team to start its season when Providence visits. The game will be at Walter Brown Arena because the team's regular home, Agganis Arena, has been repurposed as a campus COVID-19 test site. (AP Photo/Winslow Townson, File)

Albie O'Connell got the call shortly before his Boston University men's hockey team was supposed to get on the bus and hit the road for its season opener at UConn.

Someone on the team had tested positive for COVID-19. The trip was off and the BU administration put the Terriers on pause.

On Friday night, more than a month later, BU will become the last Division I men's team to start its season when Providence visits. The game will be at Walter Brown Arena because the team's regular home, Agganis Arena, has been repurposed as a campus COVID-19 test site.

“The team has been yo-yo’d in a lot of different ways,” O'Connell said.

As in other sports, there surely will be a wide variance in number of games played this season, by design or because of virus outbreaks. Some teams already have played a dozen. Many are not playing nonconference games. Those factors mess up the metrics used to determine the 10 at-large spots in the 16-team NCAA Tournament.

Instead of relying on the objectivity of the computer-based Pairwise rankings, the Division I ice hockey committee members will have to go old school and hash it out among themselves.

“It’s going to be an asterisk year in college hockey, no doubt about it,” committee chairman Mike Kemp said.

Changing on the fly, off the ice, has been the norm.

Boston University's league, Hockey East, has issued news releases announcing schedule changes 19 times in the last 48 days. Big Ten teams are playing a 24-game conference schedule, plus an additional four games per school against Arizona State. The Sun Devils are an independent, and as a one-year Big Ten affiliate had to agree to play all 28 of their games on the road.

In the Western Collegiate Hockey Association, Northern Michigan has played six games and had eight postponed or canceled.

In the Eastern College Athletic Conference, the six Ivy League members along with Union College and RPI opted out for the season. That leaves Clarkson, Colgate, St. Lawrence and Quinnipiac.

Another league, Atlantic Hockey, has had 22 of its first 81 games canceled or postponed.

The National Collegiate Hockey Conference had its eight teams gather for 21 days in Omaha, Nebraska, last month. All players, staff and officials had to stay in what was called the pod, meaning Baxter Arena and their nearby hotel. There was regular COVID-19 testing and other precautions were taken, and all 38 of the scheduled games were played.

“I can tell you the costs were significant, both in hosting and in travel, but were fully supported by our membership as a manner that allowed us to start competition in a safe environment,” NCHC Commissioner Josh Fenton said in an email. “Each institution pays for their own travel expenses and the conference paid for the administrative costs to host the pod.”

Once the teams dispersed, the reality of COVID-19 returned. Omaha has had four straight games, all against top-ranked North Dakota, called off because of a virus outbreak among the Mavericks.

“We got it in spades,” said Kemp, an Omaha associate athletic director.

The situation is similar in Division I women's hockey. St. Lawrence has yet to play. Top-ranked Wisconsin recently had four straight games called off. No. 3 Northeastern had games against Holy Cross canceled three days after they were scheduled.

Hockey teams are making other adjustments. Some programs use two locker room rooms instead of one to create social distancing, and players are urged to shower at home after practices and games.

Face coverings are mostly mandatory. Players aren't required to wear face coverings on the bench even though they sit shoulder-to-shoulder, but coaches, athletic trainers and equipment managers must.

Because of the virus outbreak, academic schedule and university policy requiring isolation after returning to campus, it had been 36 days since the Terriers practiced as a full team Monday.

O'Connell said it's anyone's guess how his team looks Friday.

“Any time you put on the jersey we're looking to win,” he said. “Are we going to have the best legs? I don't know. We haven't played legitimately for almost a year.”