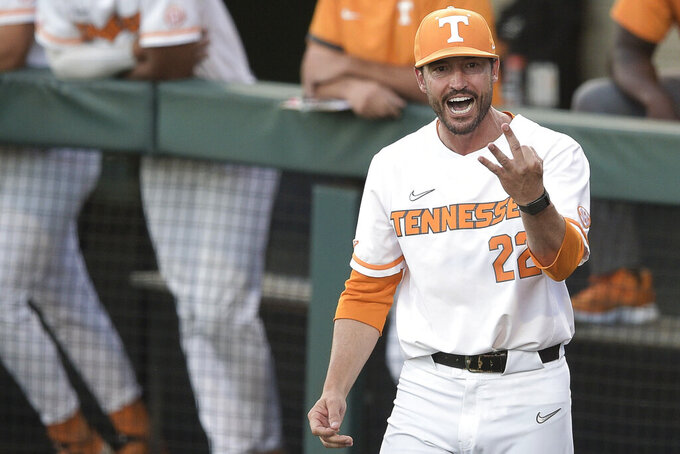 FILE - Tennessee coach Tony Vitello disputes a call during the team's NCAA college baseball tournament regional game against Wright State on June 4, 2021, in Knoxville, Tenn. A University of Tennessee fraternity played off Vitello's suspension for chest-bumping an umpire to raise money Wednesday, April 20, 2022, for an organization serving active military members and veterans. Vitello agreed to chest-bump anyone who wanted one and had $2 to donate to the Wounded Warriors Project. (Calvin Mattheis/Knoxville News Sentinel via AP, File)

Vitello offered a chest bump to anyone who had $2 to donate to the Wounded Warriors Project.

The popular coach already was scheduled to appear at the Sigma Alpha Epsilon event on campus where participants could throw at a dunk tank as well.

“After what transpired last weekend, we thought it would be kind of a funny gag if he gave some chest bumps to students,” said fraternity chapter secretary and event organizer Gerard Tavoleti. “He thought it was a funny little gag, so he obliged to our request.”

The NCAA suspended Vitello for four games for chest-bumping third-base umpire Jeffrey Macias during a confrontation in the first inning of the Vols' game against Alabama last Saturday. Vitello will return to the dugout Sunday at Florida.

Vitello chest-bumped about 10 students during the 10-20 minutes he was at the event and successfully dunked a fraternity member — though it took him more than one throw. Football coach Josh Huepel needed just one throw to do the same. The chest bumps and dunk tank raised more than $1,000.

During his two-game suspension in 2018, Vitello raised money for another charity by hosting a pizza party and lemonade stand outside Lindsay Nelson Stadium while the Vols were playing Vanderbilt inside.