Cincinnati does damage inside, upends No. 21 Tennessee 78-66 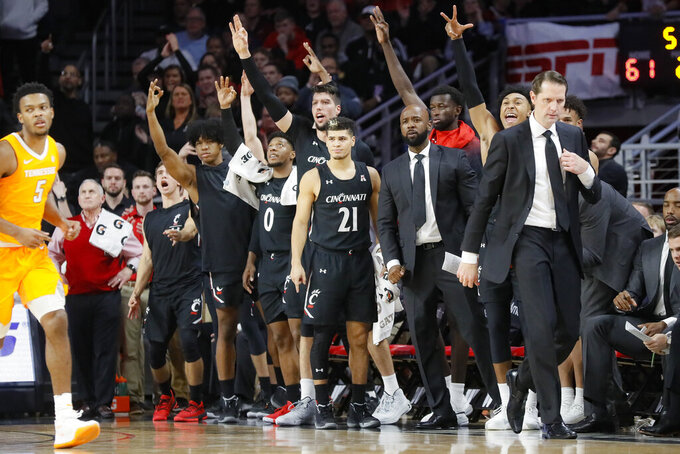 The Cincinnati bench reacts during the second half of an NCAA college basketball game against Tennessee, Wednesday, Dec. 18, 2019, in Cincinnati. (AP Photo/John Minchillo)

CINCINNATI (AP) — A defense that had been among the nation's best got shredded, and that wasn't the only thing that went wrong for the 21st-ranked Volunteers in their first true road game.

Tennessee couldn't hit a 3 and couldn't run anything consistently on offense during a 78-66 loss to Cincinnati on Wednesday night that left coach Rick Barnes befuddled.

“We did some things that were mind-boggling,” Barnes said.

Trevon Scott scored 15 points, the Bearcats had six players in double figures, and Cincinnati got 46 points in the paint, attacking the out-of-place Volunteers with backdoor layups.

For a second straight game, Barnes came up short again in his attempt to get career victory No. 700. He'd be only the 22nd coach to reach that mark in Division I.

The Volunteers (7-3) were coming off a 51-47 loss to No. 13 Memphis that highlighted their offensive shortcomings. This time, the biggest problems were on a defense that hadn't given up 70 points in a game this season.

“Oh, it was awful,” Barnes said. “And I'm really disappointed in our defensive breakdown, the way we did it. I mean, it came from our older guys, too. When you go on the road for the first time, you expect your older guys to be the ones who lead the way.”

The Bearcats (7-4) got the better of a back-and-forth game by going on a late run. Keith Williams had a steal and layup during a 9-0 spurt that put the Bearcats in control 67-57 with 3:27 left. Williams finished with 11 points and five rebounds.

Cincinnati was coming off back-to-back losses at Xavier and Colgate, and played its most cohesive game under first-year coach John Brannen.

“The biggest thing is they get the chance to see what happens when they all stay together,” Brannen said. “This is what it looks like. We've got to sustain it.”

Tennessee has lost back-to-back games for the first time since it lost to Arkansas and Auburn two seasons ago.

“I don't think we were locked in on defense," said John Fulkerson, who had a team-high 14 points. '"here were things that we usually do and we should have done, and we didn't. And it came back to bite us.”

The Bearcats led 38-34 after a wide-open first half that was full of turnovers. They shot 64% from the field, with Jaevin Cumberland making four of his five shots to lead the way.

The Volunteers dug in defensively at the start of the second half — Cincinnati missed eight of its first 12 shots — and neither team managed to get much of an advantage. There were two ties and four lead changes before Cincinnati went on its pivotal run.

Tennessee: The Volunteers have struggled at times on offense, but their defense has been consistent. They came in fifth nationally in field goal defense, allowing opponents to shoot 36.2%. The Bearcats made 56.4%, the most by a Vols' opponent this season.

Cincinnati: The Bearcast' biggest questions revolve around Jarron Cumberland, the returning American Athletic player of the year. He played the last two games with a sore hip and shot only 27 percent from the field. Against Tennessee, he had 10 points and six turnovers before fouling out.

“He put in two really good days of practice,” Brannen said. “He put extra work in. I haven’t coached the Jarron Cumberland that we all know and love. When I say I haven’t coached him yet, he hasn’t been in the shape and healthy enough to be that guy. It’s coming.”

Tennessee went only 3 of 15 from beyond the arc and had trouble running plays, especially late in the game as Cincinnati pulled away.

“When guys start thinking, ‘I’ve got to do it myself,' we don't have a team like that,” Barnes said. “And if it takes more of these losses to prove it to them, that's what will happen. We've got to be a team. We don't have one guy we can rely on.”

It was Brannen's first win against a ranked team in five tries during his career. The Bearcats lost at Ohio State to open the season.

Cincinnati plays Iowa on Saturday at the United Center as part of the Chicago Legends event. The Bearcats lost to Iowa 79-72 in the first round of the NCAA Tournament in Columbus, Ohio last season.