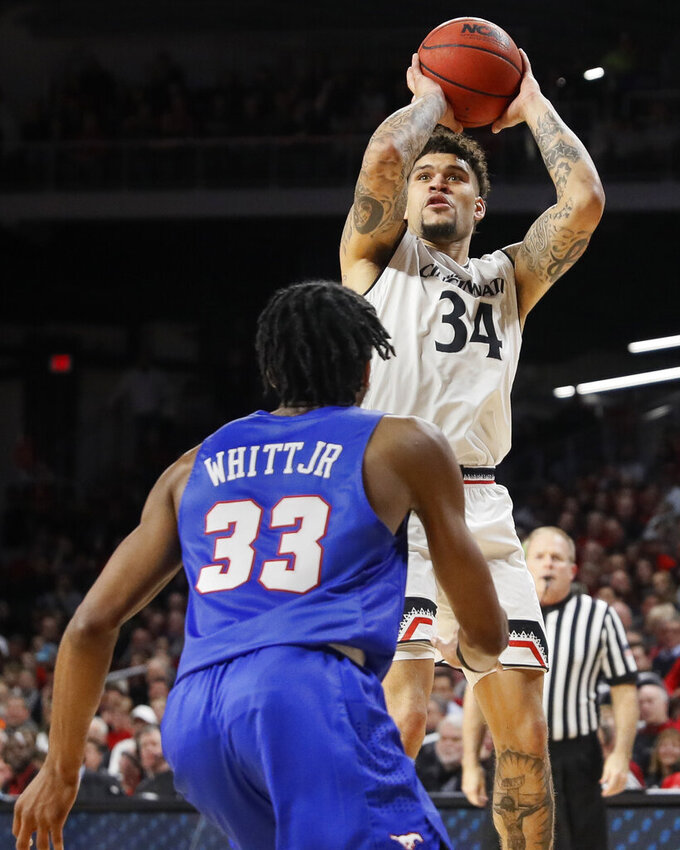 CINCINNATI (AP) — Against their wishes, the Bearcats have gotten a lot of practice at pulling them out in the end.

Jarron Cumberland scored 24 points Saturday night, and Cincinnati let a 12-point lead slip away before rallying for a 73-68 victory over SMU.

Cumberland hit a 3-pointer after SMU tied it late, helping the Bearcats (19-3, 8-1 American Athletic) pull out their seventh straight victory. The first two wins in that streak came in overtime, and this one came down to SMU (12-9, 4-5) missing a shot to tie in the closing seconds.

"Our trend continues," coach Mick Cronin said. "We've got to find a way to be a more consistent defensive team."

SMU's Jimmy Whitt Jr. hit a 3-pointer with 19 seconds left that cut it to 70-68. After Cincinnati's Keith Williams made one of his two free throws, Jahmal McMurray was short on a 3-point attempt to tie it with 4.3 seconds left. Cane Broome sealed it with a pair of free throws.

McMurray had 21 points for short-handed SMU , which has lost four of five.

"I'm proud how these guys are somehow emotionally, mentally, physically hanging in there," said SMU coach Tim Jankovich, who was down to seven scholarship players because of injuries and illness. "Practice looks like a YMCA pickup game. We have to do it differently."

The Bearcats made 8 of 17 from beyond the arc in the first half, when they led by as many as 12 points . Cumberland led the way with 13 points.

Given the Bearcats' hot shooting from the perimeter, Cronin thought the lead should have been much bigger.

"We didn't get the job done with our defensive game plan," Cronin said. "I thought the game should have been over at halftime."

McMurray made a pair of 3s and a 15-foot jumper that sparked SMU's second-half comeback, and Isiaha Mike's 3 tied it 60-60 with 6:17 to go. SMU wasted chances to take the lead down the stretch, and McMurray's final shot came up short of the rim with Nysier Brooks guarding him.

SMU: The Mustangs had one matchup in their favor. They came in second in the league with 173 made 3-pointers, trailing only Houston, and they were facing the worst 3-point defense in the league. They failed to take advantage in the first half, going only 4 of 12 from beyond the arc, but got the shots to fall in the second half and finished 10 of 28 overall.

Cincinnati: The Bearcats continue to clean up on the AAC at home. They've lost only one league game at home in the last three seasons, to Wichita State last year.

Cincinnati won all three games with SMU last season, including the quarterfinals of the AAC Tournament. The Bearcats lead the series 11-5, including an 8-0 mark at home.

THANKS FOR DROPPING IN

Cincinnati's Trevon Scott hurdled the SMU bench and landed on some of its fans in the second row while trying to save a ball going out of bounds. Nobody was hurt.

SMU's Ethan Chargois was called for a flagrant foul while boxing out on a shot with 2:18 to go, helping Cincinnati maintain its slim lead.

"That was a hard pill to swallow," Jankovich said. "They said it was a flagrant foul. I said that's what we call blocking out. I've watched Cincinnati block out like that for years."

The Bearcats missed four of their eight final free throws, helping SMU stay close. Brooks missed three in a row during that stretch.

"Man, it was frustrating at the moment," said Brooks, a 66 percent free-throw shooter. "I don't know why I couldn't get them to go in."

SMU hosts South Florida on Thursday. The Mustangs finish the regular season at USF on March 10.