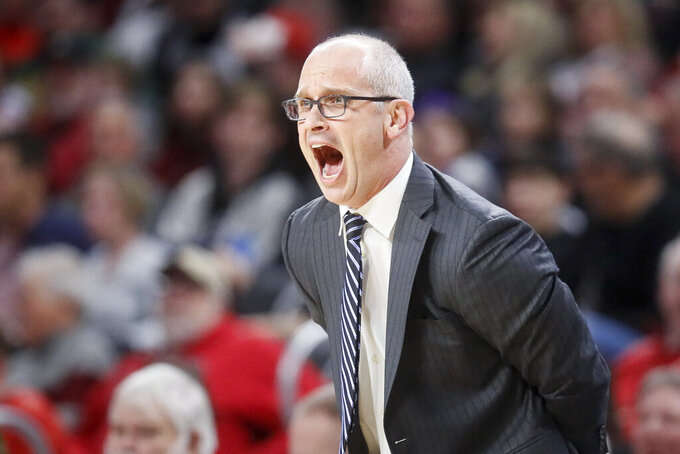 Connecticut head coach Dan Hurley directs his players from the bench in the first half of an NCAA college basketball game against Cincinnati, Saturday, Jan. 12, 2019, in Cincinnati. (AP Photo/John Minchillo) 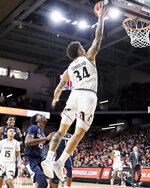 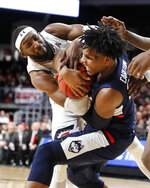 CINCINNATI (AP) — The Bearcats rallied to get an overtime win for the second time in three days, a feat so rare that they hadn't done it in 52 years. And none of them was happy about it.

Jarron Cumberland scored 22 points, and Justin Jenifer hit a pivotal 3-pointer in overtime Saturday night as Cincinnati blew an 11-point lead in regulation before rallying to a 74-72 victory , the Bearcats' sixth in a row over UConn.

Not that they considered it a bragging matter.

"It was an ugly win," said Nysier Brooks, who had 17 points.

"We don't want to compete," Cronin said. "We want to flash our Cincinnati badge and think teams are going to run the other way. Nobody's running anywhere."

The Bearcats got ahead by double digits in regulation and went more than 7 minutes without a field goal as the Huskies sent it to overtime on Alterique Gilbert's floater in the lane just before the buzzer.

In overtime, Cumberland was fouled while shooting a 3 and made all the free throws, and he passed to Jenifer for an open 3 with 1:19 left in overtime that put the Bearcats in control 70-65. UConn had a chance for a final shot, but Christian Vital was called for a charge against Jenifer with 1.5 seconds left.

"Just the type of grit that you love to see, especially in year one where you're trying to build here," first-year UConn coach Dan Hurley said. "That first layer of the foundation is that unwillingness to give in, to stay in the game against obviously the best team in the league, the bully of the conference."

The Bearcats won it from the free-throw line. They managed only three field goals in the last 14:47 including overtime, getting 18 points off free throws. They went 25 of 38 from the line while UConn was 13 of 16.

UConn: The Huskies were coming off a 76-64 home win over Southern Methodist on Thursday that ended a three-game losing streak. Their fouls prevented them from getting a significant road win. They repeatedly fouled late in the shot clock, helping the cold-shooting Bearcats escape.

"It was a physical game, and they were really tough on defense," said Cumberland, who went 11 of 12 from the line. "They're fighting over screens and everything to deny you the ball."

Cincinnati: The Bearcats weren't happy with how they played in the back-to-back overtime wins that kept the defending AAC champions near the top of the league.

"Lack of discipline, get outrebounded by eight in your gym, don't play smart, you're not the more physical team — it's embarrassing," Cronin said.

The Bearcats lead the series 14-13. They've won eight of the last nine in the series. UConn's last win was 104-97 in four overtimes in the quarterfinals of the AAC Tournament on March 22, 2016.

The Bearcats came in ninth nationally in defense, allowing 59.6 points per game. Their biggest weakness has been perimeter defense. They're second-to-last in the American Athletic Conference, allowing opponents to make 35.7 percent. The Huskies made their first three 3-point shots and finished 11 of 27.

Cumberland flexed after he scored and was fouled in the first half, giving the Bearcats their first lead of the game.

Former Bearcats football and basketball player Connor Barwin sat courtside and was introduced during a timeout.

UConn plays at Tulsa on Wednesday.