Cincinnati stays in its backyard for next basketball coach 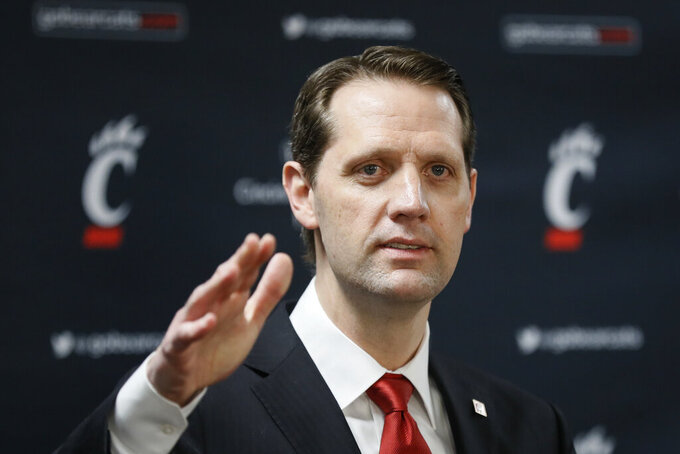 CINCINNATI (AP) — John Brannen played pick-up games at Cincinnati's on-campus arena when he was growing up and vividly recalls watching Kenyon Martin dunk over another player. He's coached — and lost — with visiting teams at the same arena.

The local guy is now in charge of the home team.

The Bearcats decided to stay in their backyard for Mick Cronin's replacement, choosing Brannen — the head coach at nearby Northern Kentucky — to try to extend their American Athletic Conference success and get deeper into the NCAA Tournament.

The 45-year-old coach grew up in northern Kentucky and was at the top of Cincinnati's list when Cronin — another Cincinnati-area native — left for UCLA last week .

Brannen led Northern Kentucky to unmatched success in its first three seasons in Division I, leading the Norse to a pair of NCAA Tournament appearances and winning the Horizon League's coach of the year award. When he arrived on the Norse campus, many students still rooted for the Kentucky Wildcats at tournament time.

That changed when the Norse reached the tournament in their first year of eligibility and gave Kentucky a scare in the first round before losing 79-70. They reached it again this season and lost to runner-up Texas Tech 72-57 in the opening round .

Getting the Bearcats deeper into the tournament will be one of Brannen's main goals.

Cincinnati reached the NCAA Tournament each of the last nine seasons under Cronin, who dug the program out from its mess after Bob Huggins' departure. But the Bearcats reached the Sweet 16 only once, in 2012. A first-round loss to Iowa last month in Columbus, Ohio made it seven straight years of failing to get beyond the opening weekend.

In the short term, Brannen takes over a team in transition at the guard spot. The Bearcats lose senior point guards Justin Jenifer and Cane Broome. Jarron Cumberland, the AAC's player of the year, hasn't declared whether he'll return for a senior season.

The most intriguing question is how much Brannen changes the Bearcats' style. Cronin emphasized defense, rebounding and toughness. While Brannen also likes full-court defensive pressure, his offense at Northern Kentucky was much more wide open.

"Our style of play will invigorate the fan base and capture your hearts," Brannen said.

Bohn indicated that was a factor in the hiring decision. He said the new coach will bring in "an exciting brand of basketball. We like that. That's something we were looking for."

Brannen has close ties to the university beyond those pick-up games. Northern Kentucky allowed the Bearcats to use its home court during the 2017-18 season while their arena was being renovated. Brannen wasn't thrilled with the idea — "I really thought it was going to be a distraction" — but the schools formed a good working relationship.

Shortly after he was introduced on Monday, Brannen was asked about the annual crosstown game with Xavier for the city's bragging rights. Xavier has taken eight of the last 12 in the series, although Cincinnati dominated on its home court 62-47 last season. The game will be at Xavier next season.

Brannen said he and his wife, Lisa, already had talked about how he'll get a chance to coach in the rivalry.