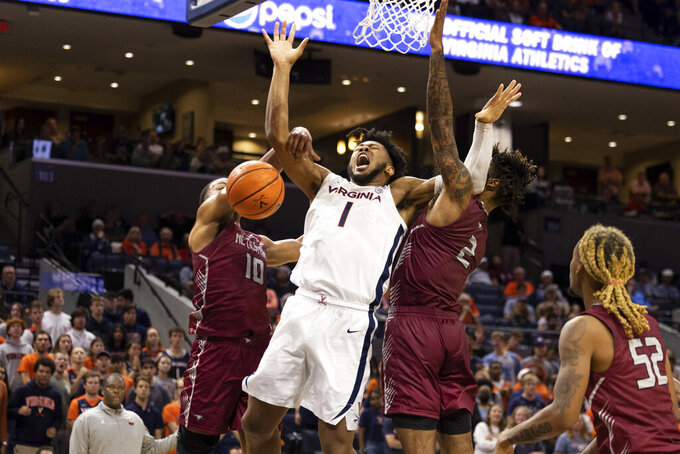 Virginia forward Jayden Gardner (1) is fouled on the way to the basket during the first half of an NCAA college basketball game against North Carolina Central in Charlottesville, Va., Monday, Nov. 7, 2022. (AP Photo/Mike Kropf)

CHARLOTTESVILLE, Va. (AP) — Kadin Shedrick had thoughts of Navy all over again.

A year ago, in Virginia's opening game, the Cavaliers lost to the Midshipmen. With just over 14 minutes to play Monday night, No. 18 Virginia faced a similar scenario, having blown a 16-points first-half lead and suddenly trailing in a quiet home arena.

“Part of me was just like hoping it wasn’t last year all over again,” Shedrick said. “And, you know, I think we all just realized we had to lock in at that moment. Like, we couldn’t let them continue to build this momentum.”

The point guards handled that at the offensive end.

Clark hit a 3 from the top of the key, and Beekman followed with a steal and breakaway, bringing the crowd's roars back. After Justin Wright scored for the Eagles to make it 48-46, Beekman hit a 3, Clark fed Francisco Caffaro for a dunk in traffic and Ben Vander Plas hit another 3.

It was 58-46, and a repeat of that Navy disappointment was averted.

Eagles coach Levelle Moton said he thought his team had a good game plan for slowing Clark, a fifth-year senior, but when the game got close, he braced for something big.

Armaan Franklin led Virginia with 21 points in the season opener for both teams.

That lasted less than 20 seconds before Clark and Beekman took over.

Beekman, Caffaro and Shedrick also scored 10 for the Cavaliers.

Franklin was a heralded transfer last season, coming from Indiana as a career 3-point shooter above 40%, but he struggled for much of the season. In one stretch, over six games, he was 2 for 28, but the crowd responded jubilantly when he made two early ones against the Eagles. It was a credit to his offseason work, coach Tony Bennett said

“He just put his head down, didn’t say a whole lot and got after it. And I believe most of our guys did that. And your work will be shown for what you’ve done. Doesn’t mean you’re perfect, but there’s usually a correlation,” he said.

NC Central: Wright was selected to the preseason All-MEAC first team after averaging 20.1 points in league games and 13.7 points overall last year. He hit several long-range 3-pointers and enjoyed the big stage while leading the Eagles back from a 31-15 deficit.

Virginia: Bennett seemed inclined to work the reinforcements in quickly. Freshman Isaac McNeely and Vander Plas, an Ohio transfer, were inserted early, each drawing a boisterous greeting from the crowd. Vander Plas was a star of the Bobcats when they beat Virginia 62-58 in the first round of the 2021 NCAA Tournament.

The Eagles remain on the road, playing at Appalachian State on Thursday night.

Virginia remains at home for another 9 p.m. start against Monmouth on Friday.