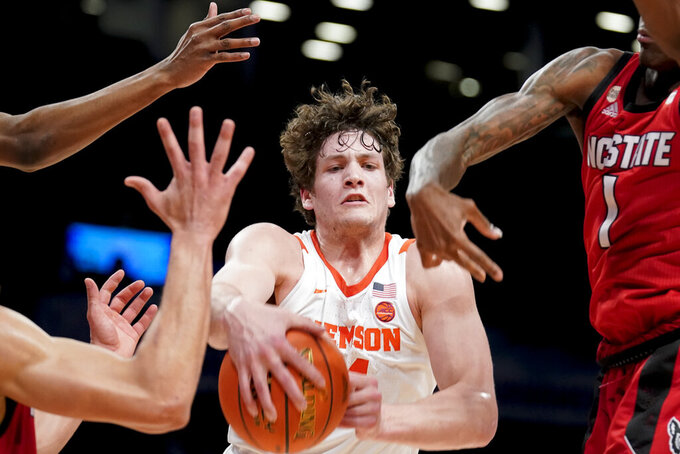 FILE - Clemson's PJ Hall (24) rebounds against North Carolina State's Dereon Seabron (1) during the second half of an NCAA college basketball game of the Atlantic Coast Conference men's tournament, Tuesday, March 8, 2022, in New York. Clemson coach Brad Brownell is on notice to bounce back after a subpar season. He's counting on top scorer in PJ Hall to fully recover from offseason surgeries and make Clemson competitive in the ACC. (AP Photo/John Minchillo, File)

CLEMSON, S.C. (AP) — Clemson coach Brad Brownell looks around at ACC men's basketball meetings and sees fewer and fewer faces who've been doing it as long as him.

Brownell is entering his 13th season with the Tigers — only Leonard Hamilton of Florida State and Tony Bennett of Virginia have held positions in the Atlantic Coast Conference longer — and hopes the season doesn't become a game-by-game referendum on his job status.

“It's challenging to stay in the profession at this level,” Brownell said. “I'm proud of it because I think it speaks to the culture of what we do in our program.”

Brownell touts players who stay out of trouble, graduate if they stay around and take well to coaching. He has taken the Tigers to just three NCAA Tournaments during his tenure.

“We're probably more successful than people realize,” Brownell, whose team is seventh in ACC victories the past five seasons. “We've done a lot of things that are really pretty good.”

Last season was not among them. The Tigers had their ninth straight season of .500 or better at 17-16, but went just 8-12 in the ACC for their first losing league record in five years.

First-year athletic director Graham Neff wrote the fan base after last season, saying the NCAA tourney is the goal the Tigers must shoot for starting this year. Neff also pledged a football-like financial commitment on a regular basis.

While winning a league or national title is a goal, forward Hunter Tyson doesn't think the season will be a failure if they come up short. As long as the Tigers are playing their “best basketball at the end of the year, working hard every day, taking every opportunity we can to just be the best team we can be,” he said.

Clemson's leading scorer, 6-foot-10 PJ Hall, went through surgeries on his foot right after the season, then his right kneecap during the summer. Brownell said he's been able to shoot, but not run the floor yet with his teammates at fall practice. Hall, who averaged 15.5 points and 5.8 rebounds last year, is a centerpiece for the Tigers, who won't have as much talent or depth without him. Brownell hopes he can return to games sometime in November.

Clemson went overseas this summer with three exhibition games in France. The basketball helped bond the young team while the history was overwhelming, Brownell said, especially when the group visited Normandy, where the Allies landed as part of the D-Day invasion.

At the U.S. military cemetery nearby, the group saw the gravesites of six Clemson students killed during the operation. “I hope that's one that sticks with them a long time,” Brownell said.

There will be a change at point guard. Al-Amir Dawes, who started 41 of 55 games the past two years, transferred to Seton Hall. Brownell expected Chase Hunter and perhaps younger brother Dillon to see time as the lead guard this season. Dawes also was the top three-point and foul shooters among the starters at nearly 40%.