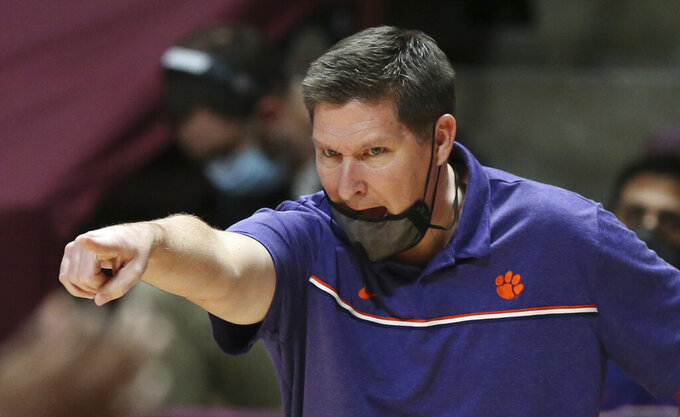 FILE - In this Dec. 15, 2020 file photo, Clemson head coach Brad Brownell in the first half of an NCAA college basketball game in Blacksburg Va. Brownell has received a contract extension that ties him to the Tigers through 2025-26 season. The university's trustees approved the new deal on Friday, Oct. 1, 2021. (Matt Gentry/The Roanoke Times via AP, Pool, File)

Clemson men's basketball coach Brad Brownell has recieved a two-year contract extension that will tie him to the Tigers through the 2025-26 season.

Brownell is the program's all-time victories leader with a 201-149 record over 11 seasons.

The new deal also includes a raise of $400,000 for this season with a total financial package of $2.6 million. Brownell's compensation grows to $3 million for each of the final two years of the agreement.

The new deal was approved by the compensation committee of the school's board of trustees on Friday.

“Brad continues to be a great leader and ambassador for our men’s basketball program,” Clemson athletic director Dan Radakovich said in a statement.

Should the school end Brownell's employment after this season, it would owe him $25,000 per month for the remainder of the contract. That monthly amount increases each year and would be $250,000 a month in Brownell's last season.

Should Brownell choose to leave, he'd owe Clemson $500,000 in the first season, $250,000 in the second through fourth years and 25 percent of what the university would owe him in its buyout for the final season.

Brownell has spent 11 seasons with the Tigers, leading them to three NCAA Tournament berths including two in the past four years.

Clemson fell to Rutgers in the opening round of the NCAAs this past spring.

The Tigers finished 16-8 last season, including 10-6 in the Atlantic Coast Conference.

Radakovich said Brownell has been essential in helping fundraising efforts for the recent improvements to its home arena, Littlejohn Coliseum.

Brownell was hired before the 2010-2011 season. The Tigers reached the NCAA Tournament in his first seasons, then not again until 2018 when they advanced to the round of 16.

Brownell and the Tigers have won 10 or more games in the ACC in four of the past seven years.

B rownell, 52, thanked Clemson's leadership and said he's only been able to achieve what he has through the work of the players he's had through the years. “I am proud of what we have been able to accomplish, both on and off the court,” he said in a statement. “And look forward to continuing our program's upward trajectory.”