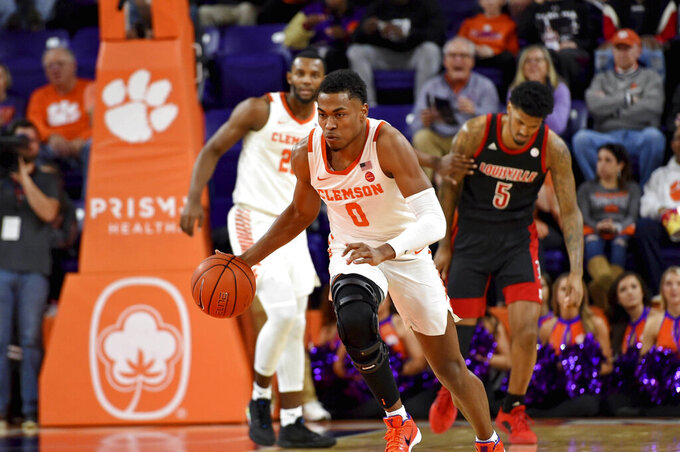 Clemson's Clyde Trapp, center, dribbles after a steal during the first half of an NCAA college basketball game against Louisville, Saturday, Feb. 15, 2020, in Clemson, S.C. (AP Photo/Richard Shiro) 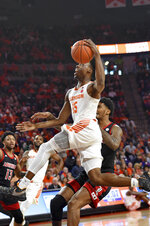 That resolve brought the Tigers a stunning 77-62 upset win over the Cardinals — and another major moment in what's been an up-and-down season.

Newman had a career-high 23 points as Clemson beat its second AP top-five opponent this year — something it hadn't done since the 1975-76 season.

“People that know me just tell me to stay aggressive because sometimes I'm passive," he continued. “My coaches, my teammates they believe in me."

Newman made seven of nine shots and went 7 of 7 from the foul line as Louisville (21-5, 12-3 Atlantic Coast Conference) desperately tried to come back by sending the Tigers to the foul line down the stretch.

Newman hadn't cracked double-figure points in more than a month, his last time coming when he scored 14 in the 79-72 upset over then-third-ranked Duke.

It's no coincidence that when Newman is active and engaged, the Tigers (13-12, 7-8) are a more dangerous team, Clemson coach Brad Brownell said.

That's especially true on defense, where Clemson locked up Louisville in the first half and ACC leading scorer Jordan Nwora throughout.

The Cardinals missed 15 of their last 16 shots of the opening period, their 14 points their lowest first-half output this season.

Nwora ended with five points and one basket that came with Louisville already trailing by double digits.

It was only the second time this season the Cardinals lost consecutive games.

“This week wasn't a good week for us," Louisville coach Chris Mack said.

Louisville did cut a 21-point lead to 44-34 on Dwayne Sutton's jumper with 9:49 left. That's when Clemson took off on an 11-2 run to put the Cardinals in a hole they could not climb out of.

Mack finished with 14 points and Simms 13 for the Tigers.

Clemson's Brownell was disappointed with his team's defensive play in an 80-62 loss at Louisville last month. He have few complaints in the rematch as the Tigers swarmed Louisville and Nwora throughout.

Nwora's only basket was a 3-pointer with 1:52 to play that drew his team within 11 points, as close as they'd come down the stretch.

The slump dropped Louisville out of first in the ACC after No. 7 Duke topped Notre Dame on Saturday to improve to 12-2 in the league.

Nwora had a season-low two points (he shot 1 of 6 from the field) in the loss at Georgia Tech and Chris Mack gave freshman Samuell Williamson his first start of the season.

But even when Nwora returned, it didn't help the Cardinals much in the opening half as they struggled to penetrate Clemson's defense.

Louisville made only five of its 32 field-goal attempts the first 20 minutes.

The Tigers, who have often struggled to make shots this year, had no such trouble early on. They made their first five attempts (including 3-pointers by Johnny Newman and Mack) to take a 12-5 lead that they increased to 17 points by halftime.

Mack didn't have an answer to why his team is struggling.

“The teams we're playing are too together and we're not right now," he said. “It's unfortunate, but it happens sometimes and my job is to keep our team on course and get better."

Louisville: The Cardinals and Nwora have hit a cold patch at a dangerous time in the season. Louisville was listed as a No. 2 seed in the NCAA Tournament projections earlier this month and could see that slide unless they turn things around.

Clemson: What to make of the Tigers this season? They've won games against top-five opponents Duke and Louisville, yet are squarely in the middle of the ACC pack because of their inconsistency. If Clemson can play as solidly as they did against the Cardinals, they might surprise another ACC contender or two down the stretch.

Clemson's Brownell said the loud, sellout crowd energized his players' defensive effort, just like the Tigers' football teams are pumped up — and opponents unnerved — when the Death Valley crowd screams on opposing offensive series. “If it gets to third down, it's just insane," Brownell said. “When our crowd does that here, it energizes our team.”

Actor Bill Murray attended the game, the Charleston resident up to see son Luke Murray, a Louisville assistant coach. The elder Murray has watched sports in the Palmetto State before, often attending college baseball and basketball in Charleston.