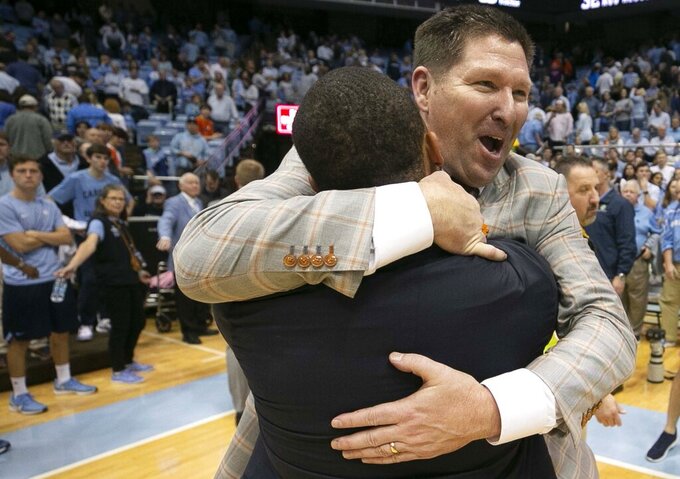 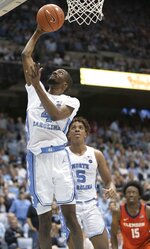 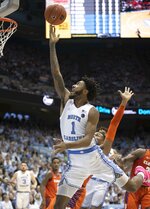 CHAPEL HILL, N.C. (AP) — Year after year, every Clemson team that played at North Carolina left the court in the same fashion: by throwing another loss onto what had grown into a bizarrely long streak.

No longer. For once, the Tigers were the ones celebrating in Chapel Hill at Saturday's final horn while the Tar Heels were left to ponder a late collapse to add to their recent struggles.

Aamir Simms hit an overtime-forcing 3-pointer with 3.5 seconds left in regulation and Clemson went on to erase decades of futility at North Carolina by beating the Tar Heels 79-76, earning their first win in 60 tries in Chapel Hill.

“We're certainly glad to have it past us and not be asked about it any more," coach Brad Brownell said, "and we can move on to other things that we need to accomplish in our program.”

Simms finished with 20 points for the Tigers (8-7, 2-3 Atlantic Coast Conference), who trailed by 10 with a little more than two minutes left in regulation. But Clemson made a frantic comeback to force the extra period, then came up with enough key baskets to do what no other predecessor had done in school history.

Clemson's streak began in 1926 and had reached 0-59 to give the Tar Heels (8-8, 1-4) an NCAA record for the longest home winning streak against once opponent.

All that pent-up frustration spilled out at the horn, with Tigers players running to midcourt to celebrate while John Newman III wrapped Brownell in an engulfing hug.

That celebration continued all the way to the Tigers locker room, too, with Brownell exchanging high-fives with players outside in a celebration that was still audible as UNC coach Roy Williams held his postgame news conference a few doors away.

Simms added a critical driving basket with 18.1 seconds left in OT, then the Tigers got a final stop when Garrison Brooks and then Brandon Robinson both missed tying 3-pointers on the final possession. Robinson's miss had the senior lying on the court as the Tigers launched their celebration despite his career-best 27 points.

Williams — who remains tied with late mentor Dean Smith for fourth on the Division I men's career coaching wins list with 879 victories — took blame for the loss, saying he forgot to tell his players to foul late so Simms couldn't launch the tying 3.

“I’d tell (athletics director Bubba Cunningham) he should probably fire me, it probably wouldn't be a bad idea," Williams said, folding up a stat sheet to put in his jacket pocket. “The coach is supposed to help his kids. I didn’t help them very much.”

Clemson: Beyond the long run of bad history here, the Tigers were trying to win consecutive games for the first time since starting 5-1. And they looked on their way to another frustrating loss in Chapel Hill when they trailed 68-58 with 2:08 left, only to complete an improbable turnaround by forcing some turnovers with fullcourt pressure and hitting some big shots to make history.

UNC: The Tar Heels were struggling with their worst record through 15 games under Williams. And they were battered entering this one, from top player Cole Anthony missing his seventh straight game following knee surgery to the pregame announcement that freshman point guard Jeremiah Francis wouldn't play due to left-knee soreness. Williams said Friday he doesn't say much about the streak with his team beyond noting it has to end at some point and the goal should be to “try to put it off another year.” And now, that run is over.

Simms said “my heart stopped” when Robinson launched the tying 3-pointer to force a second overtime.

“I'm just watching the ball like in the movies, just going in slow motion,” Simms said. “I’m just watching it go, and when I saw it hit the back rim, all I could think was, ‘I’ll have to run and find somebody on my team so I could give them a hug.’ It’s something I’ll never forget in my life.”

While Williams blamed himself for the loss, Brooks put it on the players.

Clemson: The Tigers host No. 2 Duke on Tuesday.