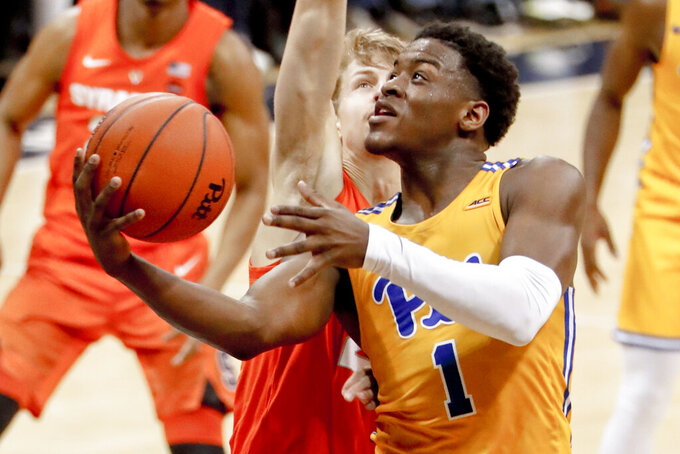 FILE—In this file photo from Feb. 2, 2019, Pittsburgh's Xavier Johnson (1) shoots against Syracuse in an NCAA college basketball game in Pittsburgh. Johnson set a Pitt freshman scoring record last season while also being the only player in the ACC to average at least 15.5 points and 4.5 assists per game. New head coach Jeff Capel's first season at Pittsburgh brought optimism. Now comes the hard part: building off it while playing in arguably the nation's toughest conference. (AP Photo/Keith Srakocic, File) 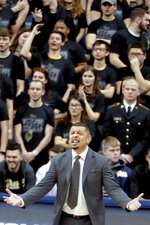 PITTSBURGH (AP) — Jeff Capel doesn't need to glance down at his phone to find his way around anymore. The Pittsburgh coach would drive around last fall and occasionally his navigation app would freeze.

"I had a bunch of people honking at me from behind and throwing up some fingers," said Capel, with a laugh. "That's OK. I found my way."

So, Capel believes, have the Panthers.

Eighteen months after agreeing to rebuild the program following Kevin Stallings' tough two-year tenure — one in which Pitt won a total of four Atlantic Coast Conference games in front of a sea of empty seats at the once raucous Petersen Events Center — Capel is confident the foundation he laid during his first season on the job is solid.

It's one he expects the team to build on over the next five months. He'll get an early progress report Wednesday night when Pitt hosts ACC foe Florida State in a "made for TV" season opener designed to help promote interest in the conference's newly established television network.

"For all of us, last year, everyone, for players, everything was new," Capel said. "Now there's familiarity. I can tell you personally, I feel so much more comfortable in Pittsburgh. ... I do think I have a better feel for where we are, and we still have a long ways to go to get to where we want to be. But I think we're taking the necessary steps to make that happen."

Those steps include upgrading the roster in hopes of making it more competitive in arguably the nation's toughest conference. Only two scholarship players — forwards Kene Chukwuka and Terrell Brown — remain from the 2017-18 group that went winless in the ACC.

The arrival last season of freshmen trio Xavier Johnson, Trey McGowens and Au'Diese Toney gave Pitt a needed dash of athleticism and swagger. They'll be joined this season by swingmen Justin Champagnie and Gerald Drumgoole, the top acquisitions from a recruiting class that includes transfers Ryan Murphy and Eric Hamilton.

Addressing the program's talent deficiency were the first steps in Capel's systemic overhaul, along with developing a style better suited for the ACC. The Panthers rose to national prominence in the early 2000s by carving out an identity in the Big East defined by grit and toughness. Capel's trying to do the same in the ACC, but at a much faster pace.

"If we get rebounds, we can beat a lot of teams down the court," Toney said. "Last year we couldn't do it because we didn't have versatile guys. Now we can ... space the floor, just get it and go."

That's if the Panthers can be competitive on the glass. They weren't at times last year, not because of effort but because of a lack of size. It's telling that the 6-foot-6 Toney led the team in total rebounds, a testament to his tenacity. The willingness to get into the lane and bang with the big guys became ingrained as a child growing up in Alabama.

"You've got to do the dirty work," Toney said. "I feel like that's what I try to do every night. Ever since I was little, I've always been able to rebound. If you rebound, you can get the ball. That was a big key."

Still, he's going to need plenty of help if the Panthers want to make a leap forward. Pitt isn't much bigger than it was a year ago, with only four rotational players over 6-7. Yet Capel's already won over some doubters. The Panthers were picked to finish 10th in the 16-team ACC. It's a respectful nod to the work Capel did in his return to head coaching after serving since 2011 as one of Mike Krzyzewski's top assistants at his alma mater Duke.

Asked to define what the 44-year-old wants the Panthers to look like going forward, his vision is a mixture of the ethos that defined the program at Duke and the city where he no longer needs Siri.

"I'm hopeful that our identity will always be that we fight, we compete, there's a toughness about us and that we play intelligently," Capel said. "We haven't shown all those things all the time. I think most of the time we've done that, especially the first ones. The intelligent part we still have to get better with."

The roster isn't the only thing that's been upgraded. Pitt flipped the court at the Pete during the offseason, moving the benches for both teams in front of the "Oakland Zoo" student section, something Capel felt was important to create a more intimate atmosphere. The Panthers will don new uniforms as part of a rebranding of the entire athletic department.

Yet Capel is aware all the window dressing won't matter if the product on the court doesn't take another step forward.

"I'm proud of changes that have been made, the colors, flipping court, video boards in the end zone," Capel said. "With it being a national TV game, people are getting to see that right off the bat. We have incredible challenge in front of us."