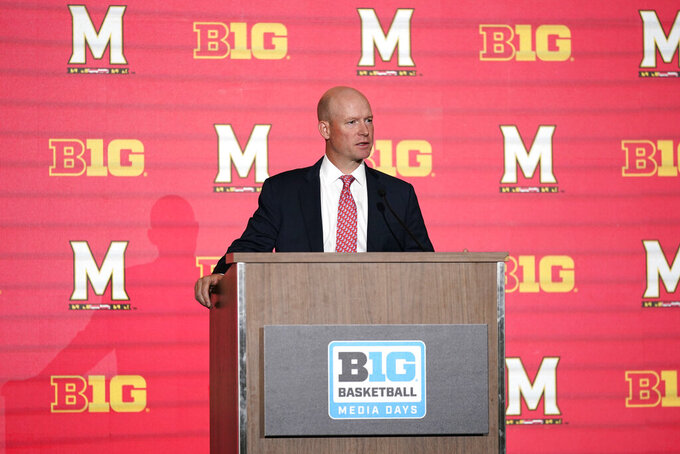 COLLEGE PARK, Md. (AP) — Kevin Willard could have taken the job at Maryland, looked at a program that hasn't been a real factor in the NCAA Tournament in a while, and started a major overhaul.

Instead, the Terrapins' new coach wants the transition to be a bit smoother.

Willard will make his debut as Maryland's coach Monday night when the Terrapins open the season against Niagara. He took over after Maryland finished below .500 in 2021-22. The Terps and coach Mark Turgeon parted ways in December, leaving Danny Manning in the job on an interim basis for the rest of the season.

With the transfer portal such a big part of college basketball, it's possible for a new coach to make over a roster pretty quickly, but Turgeon said he made a point of not bringing in players who were going to displace key returnees. Forward Donta Scott and guard Hakim Hart, two regular starters from last season, are back.

Scott is aware a lot will be expected of him in terms of leadership.

“This year I know that I have to step up and be more of a vocal leader. More of a guy that shows younger guys mistakes I have made in my past and that they may be making now," he said. "And just being out there and being more aggressive, just going out there like every game is my last.”

The 47-year-old Willard previously coached at Seton Hall and Iona, so he has experience taking over at schools where basketball isn't overshadowed by a major football power. What's different about Maryland is that two decades ago, the Terps won a national title in their second of back-to-back Final Fours. There's enough recent history of major success.

That can be a burden but also a plus.

As for what this season will look like, Willard sounds willing to speed up a bit after his Seton Hall teams were sort of a mixed bag when it came to pace. According to kenpom.com, the Pirates ranked as high as 60th in adjusted tempo in 2010-11 — Willard's first season there — but as low as 264th in 2020-21.

There may be an adjustment period, because although Scott and Hart are important, the Terps added some significant transfers such as guards Jahmir Young, Don Carey and Jahari Long and forward Patrick Emilien.

Although Maryland went 15-17 last season, the Terps aren't that far removed from a 2019-20 season in which they tied for the conference title before the NCAA Tournament was called off because of the pandemic.

It's the type of season that will inform expectations going forward.