Cockburn, Dosunmu lead No. 12 Illinois past No. 19 Wisconsin 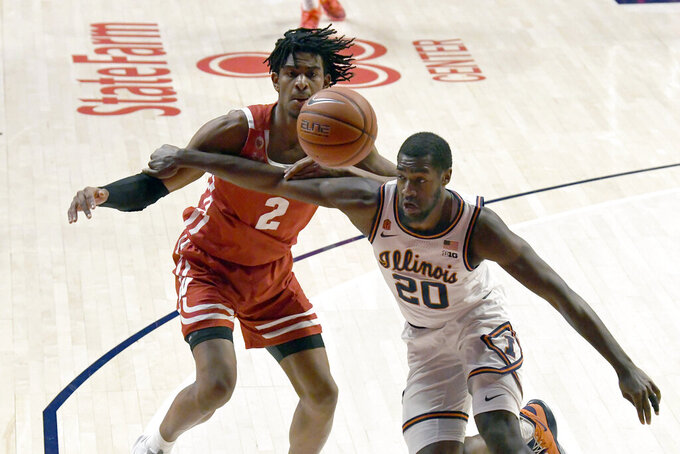 Dosunmu also had 12 rebounds and 12 assists for only the third triple-double in school history. Cockburn grabbed 14 rebounds and recorded his eighth double-double in nine games for Illinois (13-5, 9-3).

“Kofi and Ayo both had a great night, as the stats show,” said Illinois coach Brad Underwood. “They were both so efficient, too.”

“The way we had shot it offensively, we almost had to pitch a perfect game defensively,” Badgers coach Greg Gard said.

Illinois continued to struggle with turnovers, as it has all season, committing 18 to Wisconsin’s 11. But the Badgers had trouble converting the turnovers to points.

Illinois led by as many as 13 points in the first half and controlled both ends of the court. Cockburn had 12 points and 10 rebounds by halftime.

“We got off to a pretty solid start,” Underwood said. “We challenged everything and we had hands in their faces all afternoon. I'm pleased, because (Wisconsin is) as sound and solid as can be. They are a good team.”

Cockburn and Dosunmu were as good as advertised against Wisconsin. Generally, one or the other has a good game in each Illini victory. When they both play well, it's usually trouble for the opponent.

“I don’t think there’s any doubt (Cockburn) and Ayo by far and away are the two best players on the floor,” Gard said. "That’s not a shock. We thought that coming in that those guys were going to be a handful. And they were.”

“When we got them, we knew we were getting two young men with great character,” Underwood said. “Both are very, very intelligent and both understand how to make the other one a better player on the court.”

Dosunmu's triple-double was the first by an Illini player since Sergio McClain had 10 points, 11 rebounds and 11 assists on Jan. 13, 2001, against Michigan. It was the 11th triple-double in Division I basketball this season.

“It's really hard to get a triple-double,” Cockburn said. “I asked to come back in the game (with less than two minutes left) just so I could give Ayo his respect.”

Gard agreed. “These two guys are at another level. Ayo is one of the best guards in the country.”

Perhaps the best part of Dosunmu's feat was that he called it before the game.

“I was shooting around with Trent (Frazier) and told him to watch out because I was going to get a triple-double,” Dosunmu said. “I mean, I was just talking. But, hey, I got it. It's hard to do at this level. I just give all credit to the Lord.”

Illinois was able to play its customary up-tempo game against a Badgers team known for holding the ball and working the shot clock. It was the ability to run that allowed Illinois to control the game from the opening tip.

Illinois could vault into the top 10 with the win, while Wisconsin will slip a couple of positions but should stay in the Top 25.

Wisconsin: Plays at Nebraska on Thursday.

Illinois: Was scheduled to play #4 Michigan In a much-anticipated battle for the conference lead on Thursday, but the game was postponed due to COVID-19 protocols with the Wolverines. Illinois is not scheduled to play again until it hosts Northwestern on Feb. 16.

By Larry Fleisher an hour ago
By Jim Hoehn 2 hrs ago
2 hrs ago
By Hank Kurz Jr. 3 hrs ago
3 hrs ago