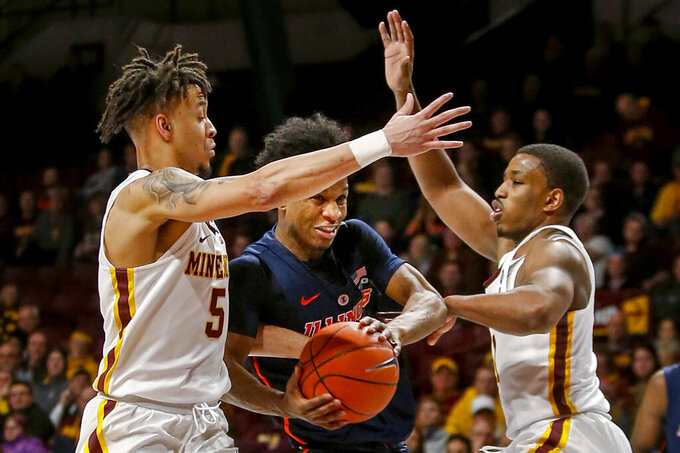 Illinois' Trent Frazier (1) tries to go between Minnesota's Amir Coffey (5) and Isaiah Washington (11) during the second half of an NCAA college basketball game Wednesday, Jan. 30, 2019, in Minneapolis. (AP Photo/Bruce Kluckhohn) 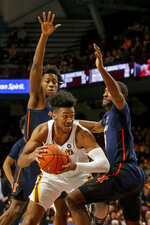 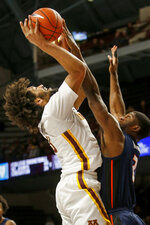 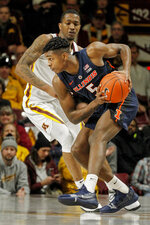 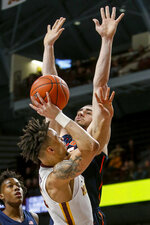 MINNEAPOLIS (AP) — The last time Minnesota played Illinois, the Gophers suffered a loss that could have derailed their season. On Wednesday night, they showed the Illini just how well they've responded.

Jordan Murphy had 16 points and 10 rebounds as five players scored in double figures for the Gophers (16-5, 6-4 Big Ten), who overcame a slow start on a night when the temperature at game time was minus-19 Fahrenheit, with a forecast low of minus-30 overnight.

The Illini earned their first Big Ten win of the season on Jan. 16 in a 95-68 blowout of the Gophers. But Minnesota is 3-1 since then, with its only loss coming at the buzzer at Michigan.

"It weighed on me pretty good," said Minnesota coach Richard Pitino of the loss at Illinois. "We didn't respond during that game well. But we responded after really well."

Freshman Gabe Kalscheur scored 14 and Isaiah Washington added 12 for Minnesota, while Daniel Oturu, who missed the Gophers' victory over Iowa on Sunday with a shoulder injury, had 11 points and eight boards off the bench.

"The last game at Illinois left a bad taste in our mouth because we were terrible defensively," said Washington, who helped the Gophers overcome a halftime deficit to build a lead as big as 17 points down the stretch. "The second half we just wanted to go out there and play hard."

"I don't like (Frazier) having 30-point nights. I'd rather we have balance," Illinois coach Brad Underwood said. "I kept looking for that balance in the second half. We missed some good shots and maybe some opportunities."

Minnesota surged ahead with a 13-1 run that included two Kalscheur 3-pointers. Illinois went almost five minutes without a field goal before Feliz hit a 3 to cut Minnesota's lead to 55-51 with 12 minutes to play.

But the Gophers weren't done. Coffey hit a 3-pointer to jumpstart a 12-0 run that he capped with a traditional 3-point play, giving Minnesota a 69-53 lead with just over eight minutes left.

"He made a really tough shot there," Pitino said. "He's one of the better players in the league. He's shown up when we needed him to show up."

Minnesota took its first lead on Washington's driving layup with eight minutes to play in the half, but the Illini immediately responded with a 7-2 run to go back up 28-25.

Murphy put Minnesota back on top with back-to-back dunks, but Frazier scored Illinois' last eight points of the half, including a 3 at the buzzer to give the Illini a 39-37 lead.

Illinois: The Illini have not been a second-half team this season. This was the ninth of their 15 losses in which they held a lead in the second half.

"We kind of took a step back after that first half," Frazier said. "I think they did a good job of . attacking, throwing that punch at us and we didn't take it. We got to get better at that and put 40 minutes together again."

Minnesota: The Gophers went 0 for 4 from behind the arc in the first half against the worst 3-point defense in the Big Ten. They pulled away in the second half on the strength of four 3-pointers in the first six minutes.

"I want them to shoot them when they're open," Pitino said. "That's too big a part of a game to not shoot 3s. You have to shoot 3s. But they've got to be good shots, and I thought for the most part most of them were really good shots."

Minnesota: At Purdue on Sunday.