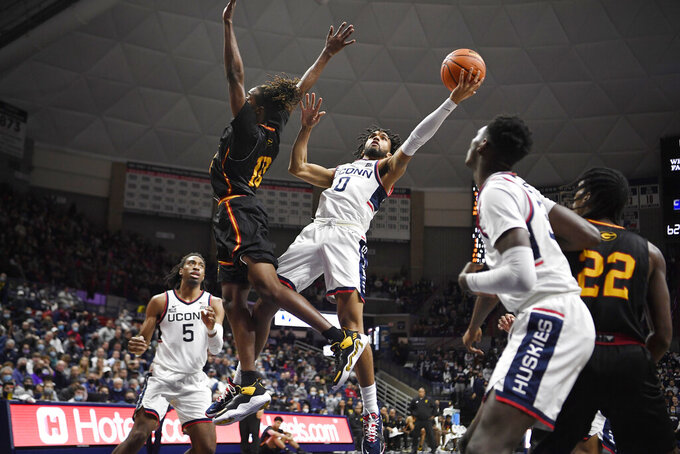 STORRS, Conn. (AP) — No. 17 UConn got a chance to show its depth on Saturday, playing without two injured starters who will be sidelined for the next several weeks.

Starting guard Tyrese Martin missed his second game as he deals with an avulsion fracture of his left wrist, which is expected to keep him out for at least two weeks. Forward Adama Sanogo suffered an abdominal strain and possible tear in a win Tuesday, and is expected to miss at least three weeks.

“That's the point of the strength of the pack,” said Cole, who also had seven assists, five rebounds and four steals. “Everybody steps up at any given moment, no matter what the situation is. So, we just told each other that out there, just stay together, stick to our identity and everything will work out.”

Cameron Christon scored all 18 of his points for Grambling State (3-6) before being injured in the first half, while A.J. Taylor added 10 points and 10 rebounds.

UConn went on an opening 17-6 run, highlighted by a pair of 3s for Hawkins and Akok converting a lob dunk and a free throw.

The Tigers’ Christon converted his first four 3-pointers and seven of his 10 shots to keep Grambling in the game, but he had to be helped from the floor after taking an elbow to the head late in the half.

“The way he shot the ball today, he was lights out,” coach Donte Jackson said. “He was making shots left and right and the tough part is that he was carrying us, and in the second half we had to figure out how to keep going from there and we kind of got a little deflated.”

UConn forced 13 first-half turnovers, converting those into 18 points. The Huskies closed the first half on a 15-4 run, turning a 32-26 lead into a 47-30 advantage at the break.

Grambling: The Tigers fell to 0-6 when allowing their opponents to score 70 points.

UConn: Sanogo had started 26 straight games for the Huskies and was averaging 15.6 points and 6.3 rebounds per game. Martin had been averaging 12.9 points and 7.7 rebounds.

“You lose two all-conference-level guys,” Hurley said. “Now you've got Isaiah and R.J., who are also. R.J. is playing like one of the best guards in the conference and Isaiah is one of the most invaluable players in our league in terms of just a do-it-all guy. So, we cannot afford those guys to be off a tick and then everyone else has got to give us more.”

UConn bounced back from a lethargic nine-point win over Maryland-Eastern Shore to dominate Grambling. Pollsters are likely to wait and see how the shorthanded Huskies do against tougher opponents before moving them up or down.

Grambling: Continue a five-game road trip to close out 2021 with a game next Saturday at Incarnate Word.