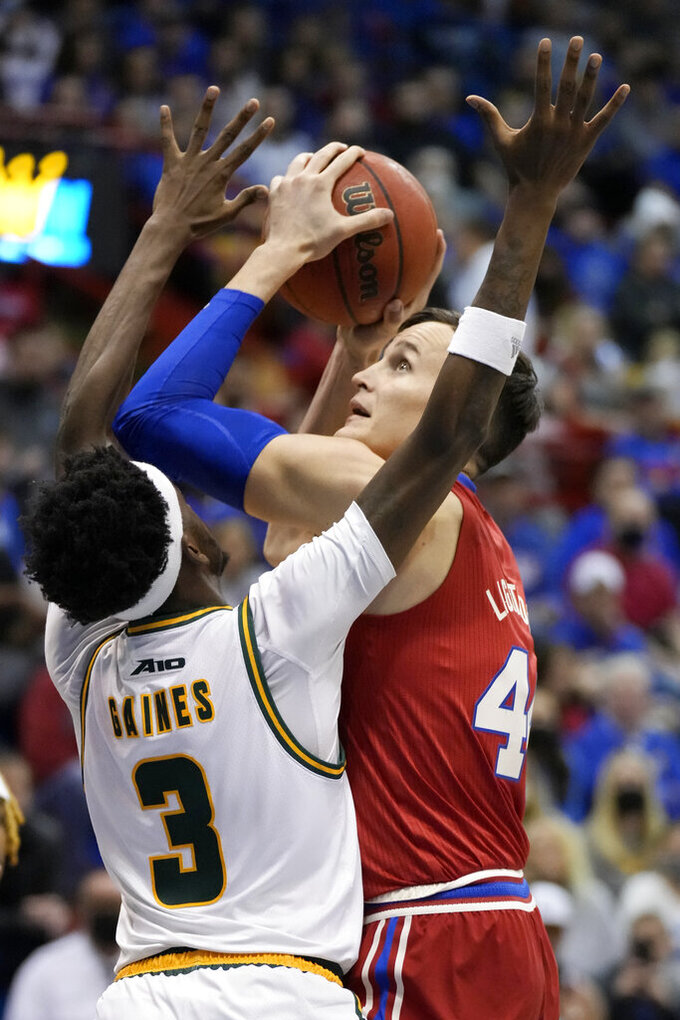 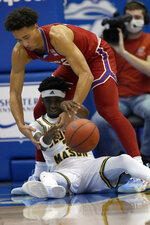 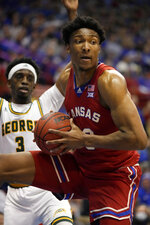 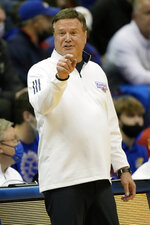 LAWRENCE, Kan. (AP) — Kim English probably didn't have Kansas guard Jalen Coleman-Lands or forward Mitch Lightfoot circled on his scouting report, especially considering the George Mason coach only had a couple days to put it together.

The two backups certainly made English pay for it.

Coleman-Lands came off the bench to hit five 3-pointers and score 20 points, Lightfoot hopped up after him and scored 14, and together they helped No. 6 Kansas hold off the Patriots 76-67 on Saturday in a late addition to the schedule.

“I think the bench went (16 of 19) from the field. That was something we needed,” said Lightfoot, who shot 7 of 7. “We just want to go out there and produce for our guys and give us the best ability to win.”

The game was put together earlier this week when Kansas had its Big 12 opener against TCU postponed due to a COVID-19 outbreak. George Mason was willing to play anywhere after it had four straight games canceled or postponed.

The Patriots were up for the challenge, too. Kansas led just 66-61 with 3 minutes left when Christian Braun rattled in a 3-pointer to extend the lead. George Mason came up empty on its next two possessions, and Ochai Agbaji converted a three-point play at the other end with 1:48 to go to put the game out of reach.

Braun finished with 14 points and Agbaji had 11 for the Jayhawks (11-1), who never led by more than 12 before holding off the upstarts from the Atlantic 10 to win their 25th consecutive nonconference home game.

“Our starters were terrific against Nevada (on Wednesday). And as good as we were against Nevada, we were probably that poor today,” Kansas coach Bill Self said. “And our bench was awful against Nevada and it was even better today. We would not have won the game without them.”

“I'm just happy we got to play basketball,” said English, who has plenty of history with the Jayhawks from his playing days at rival Missouri. “We got to play against a quality opponent in a great environment. It's going to help us for league play. We got better today. No matter the result, we got better.”

Even though the matchup was added late, and it was accompanied by a swirling snowstorm and single-digit temps, Kansas officials said they managed to sell out Allen Fieldhouse for the 325th straight time dating to the 2001-02 season.

Still, there were plenty of empty seats as George Mason stood toe-to-toe with the sluggish Jayhawks in the first half.

Part of that had to do with Kansas playing without starting point guard Remy Martin, who has a minor knee injury from a tangle with the Wolf Pack earlier this week. That forced Self into using some unorthodox lineups, including extra playing time for Coleman-Lands, a transfer from Iowa State, and Drake transplant Joseph Yesefu.

Coleman-Lands made the most of his time. He hit three first-half 3s to help Kansas pull ahead 48-37 at the break.

“My teammates give me the confidence to play the same way ever day,” Coleman-Lands said. “Shoot shots if I'm open. Play defense. It's as simple as that.”

Coleman-Lands, who fouled out in the final minutes, kept the hot going in the second half. He added another guarded 3 from the wing to push the lead to 63-53 with 8:39 to play, and forcing English to burn one of his timeouts.

That calmed down George Mason, which remained close to the Jayhawks the rest of the way.

Kansas freshman Bobby Pettiford tested positive for COVID-19 two days ago. He's been quarantined since that point and nobody else has tested positive. “We've been fortunate in that regard,” Self said. “This may be the norm for everybody."

English went 2-5 against Kansas during his playing career at Missouri. But the guard was 0 for 4 in Allen Fieldhouse, and he was on the team that lost an overtime heartbreaker in 2012 in their last Border War game as Big 12 rivals.

George Mason wasn't intimidated by playing on the road in a bigger environment. The Patriots won at No. 20 Maryland in November and at Georgia in December, and they played Washington close at the Crossover Classic.

Kansas was nearly flawless in blowing out Nevada on Wednesday. That wasn't the case against George Mason. Despite only nine turnovers, the Jayhawks struggled all night to get into rhythm and had too many defensive breakdowns.

George Mason is finally supposed to play its A-10 opener against Rhode Island on Wednesday night. The Jayhawks hope to open Big 12 play at Oklahoma State on Tuesday night.