Cole's drive, defense lift No. 21 UConn over No. 8 Villanova 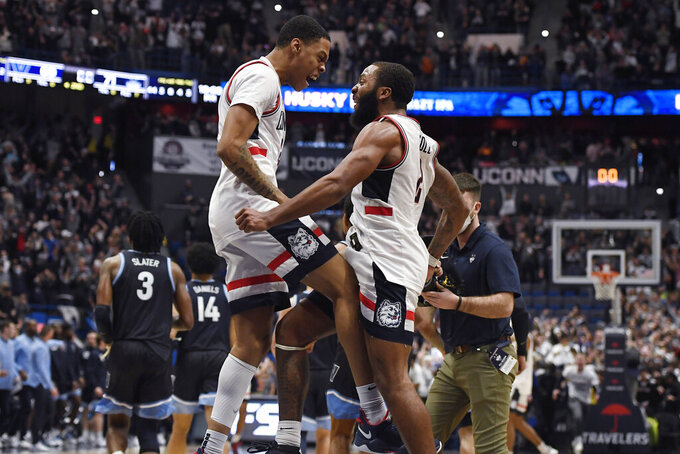 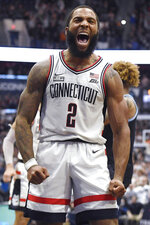 HARTFORD, Conn. (AP) — UConn’s first win over Villanova during the Dan Hurley era came with the head coach watching the game on television in the back of the arena.

R.J. Cole hit a driving floater with 5.9 seconds left and then took a charge from Collin Gillespie at the other end of the court to rally No. 21 Connecticut to a 71-69 victory over the eighth-ranked Wildcats on Tuesday night.

Adama Sanogo scored 20 points and Tyler Polley drained a clutch 3-pointer for the Huskies (20-7, 11-5 Big East), who saw their coach ejected from the game in the first half.

Isaiah Whaley added 13 points and Cole had 12 for UConn, which secured their first 20-win season in six years, prompting fans to storm the court at the XL Center.

“We took a step forward,” Cole said. “It was a huge win for us, a huge win for the program, but the season, it didn’t stop today. We have three games left. We have to continue to try and win out and put ourselves in great position going into the Big East Tournament.”

“It was two great teams battling it out and down the stretch they made the plays,” coach Jay Wright said. “We didn't make the plays. It was that close of a game.”

Villanova had a four-point lead and the ball with 35 seconds remaining. But then Caleb Daniels missed the front end of a 1-and-1 for the Wildcats, the best free-throw shooting team in the country, and Villanova was outscored 6-0 the rest of the way.

UConn led by one at halftime and seven early in the second half, but could not shake the Wildcats.

A 3-pointer from Gillespie gave Villanova its first lead of the final 20 minutes at 56-54, and the teams went back and forth over the final eight minutes.

Polley’s third 3-pointer of the second half with 21 seconds left brought the Huskies to 69-68. Cole then tied up Gillespie in the backcourt to force a turnover, setting up the winning play. The left-handed Cole drove toward the basket along the right side and tossed in a tough, contested shot with his right hand.

Nova had one more chance and Gillespie drove the length of the court, but right into a waiting Cole and never got a shot up.

“It's something he's done all year,” said associate head coach Kimani Young, who coached in Hurley's absence. “There was not surprise there, but just shows his toughness, his grit, his will."

Hurley was tossed from the game after receiving back-to-back technical fouls with just under five minutes to go in the first half.

He picked up his first for slamming his fist on the scorers’ table protesting the lack of a call on what he thought was a Villanova foul. He was tossed from the game seconds later by referee James Breeding after turning to the crowd and waving his arms in the air, imploring fans to get loud.

“It was surreal. I was stunned,” Hurley said. “I guess I'll wait to see what the Big East (does). I'm very eager to find out from the head of officials what the explanation was.”

Villanova: The Wildcats trail only Providence (12-2) in the conference standings with two games left for the Wildcats to play, including a home game against the Friars next week. The top five finishers in the regular season earn a first-round bye in the Big East Tournament.

UConn: The Huskies' last win over the Wildcats came in the third round of the 2014 NCAA Tournament on the way to the program's fourth national title. Their last regular-season win in the series came in 2012. UConn came into the game having lost five straight to the Wildcats, including 85-74 on Feb. 5 in Philadelphia.

WHEN THE GOING GETS TOUGH

The win was the first for UConn in 13 games against an opponent ranked in the top 10. The Huskies are 3-3 this season against Top 25 teams.

Polley and Whaley were on the team in 2018 when the Huskies fell by 20 points to Villanova on the same floor, a loss Hurley used when he was hired to show the kind of basketball he wasn't going to allow his UConn teams to play.

“This was a big-time win. I'm not going to lie, it just felt great, just to beat them” Polley said. “Because, you know, five years, we kept getting closer and closer each year, just couldn't go over that hump. But, tonight we got over that hump.”

Villanova: The Wildcats have a week off before hosting No. 11 Providence on March 1 at Finneran Pavilion.

UConn: The Huskies play at last-place Georgetown on Sunday.