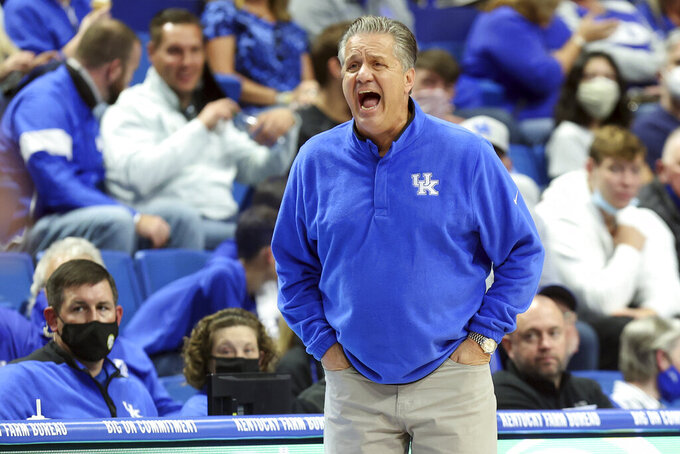 NEW YORK (AP) — Duke coach Mike Krzyzewski begins his farewell season with a final appearance on the sideline at Madison Square Garden, highlighting the 2021-22 college basketball schedule at “The World's Most Famous Arena.”

With capacity crowds now allowed back in the building, Krzyzewski and his ninth-ranked Blue Devils play No. 10 Kentucky on Nov. 9 in the 12th annual Champions Classic.

The opening-night doubleheader tips off with No. 3 Kansas facing Michigan State — the four powerhouse programs have combined for 18 national championships.

The 74-year-old Krzyzewski announced in June his plans to retire after the upcoming season. He will be succeeded at Duke by associate head coach Jon Scheyer.

He became the winningest coach in Division I men's basketball history when Duke beat Michigan State in 2011 for his 903rd career victory. Krzyzewski also earned his 1,000th win in 2015 against St. John's. He enters the season with five national titles and 1,170 wins — 1,097 with Duke and 73 at Army.

Krzyzewski and the Blue Devils return to New York City in March when the Atlantic Coast Conference Tournament is held at Barclays Center in Brooklyn for the third time.

Syracuse and No. 4 Villanova renew an old Big East rivalry in the Jimmy V Classic at Madison Square Garden on Dec. 7. Both teams reached the Sweet 16 of the NCAA Tournament last season.

That doubleheader opens with No. 18 Tennessee squaring off against Texas Tech.

The Gotham Classic on Dec. 18 features St. John’s against Pittsburgh, and Seton Hall versus Iona.

The Big East Tournament from March 9-12 will be played at The Garden for the 40th consecutive year, the nation's longest running conference tournament at one venue.

No tickets were available to the general public last season, when Georgetown took the title in a mostly empty arena because of COVID-19 restrictions.

The 85th annual postseason NIT also returns to its traditional home at MSG after a two-year absence because of the pandemic. The semifinals are scheduled for March 29, with the championship game on March 31.