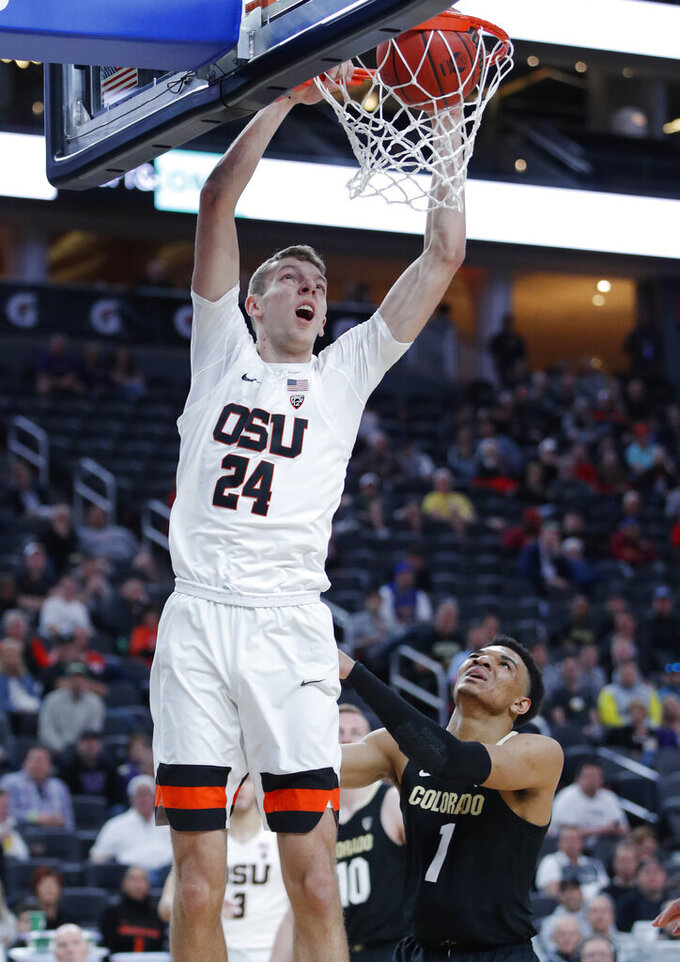 Oregon State's Kylor Kelley dunks over Colorado's Tyler Bey during the second half of an NCAA college basketball game in the quarterfinals of the Pac-12 men's tournament Thursday, March 14, 2019, in Las Vegas. (AP Photo/John Locher) 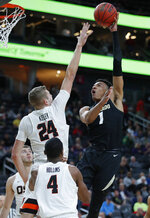 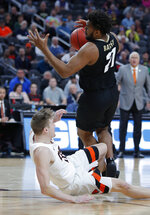 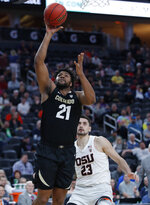 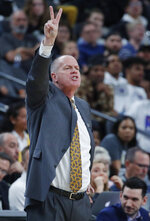 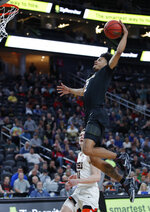 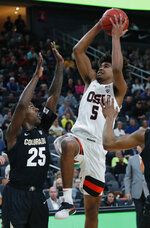 LAS VEGAS (AP) — Colorado took one punch after another from Oregon State, watching what once seemed to be an insurmountable lead turn into a close game.

When the Buffaloes finally decided to strike back, they were able to hold off the Beavers.

McKinley Wright IV scored 17 points and Colorado blew most of a 21-point lead before knocking off Oregon State 73-58 Thursday in the Pac-12 quarterfinals.

"They started getting into us and heating us up and got on our heels," Colorado coach Tad Boyle said. "We finally started attacking it, which is what you have to do."

The fifth-seeded Buffaloes (21-11) dominated early, racing out to a 21-point lead in the first half. Colorado bogged down when Oregon State turned up the defensive pressure, watching its lead dwindle down to six.

The Buffaloes gathered themselves and started stretching the lead back, overcoming 7-for-23 shooting in the second half to earn a spot in Friday's semifinals against top-seeded Washington.

"We just talked about being patient on offense and keep guarding the same way we did the first half," Colorado big man Evan Battey said. "That's about it."

The fourth-seeded Beavers (18-13) came out tight after getting a bye into the quarterfinals and didn't crack double digits in points until 5:55 of the first half.

Oregon State used a pair 10-0 runs midway through the second half to get back in it, but couldn't dig all the way out of the big early hole.

"Just picked the wrong game of the year to come out, not make shots, not defend with the intensity we needed to early on, and dug a big hole for ourselves," Oregon State coach Wayne Tinkle said. "Great effort in the second half to give ourselves a chance and I think we just ran out of steam."

The Buffaloes grinded out a 56-51 win over California in their Pac-12 opener, overcoming sloppy turnovers and holding on after blowing most of a double-digit lead.

Oregon State earned the tournament's No. 4 seed and a coveted first-round bye by beating Washington State in its regular-season finale.

The Beavers won the lone regular-season meeting 76-74, but Colorado had the energy early in the rematch despite playing the day before.

Playing superbly at both ends, the Buffaloes raced out to a 28-8 lead and led 37-18 at halftime. Colorado made 15 of 28 shots and held the Beavers to 8 of 29, missing all nine of their 3-point attempts.

Oregon State became the aggressor to start the second half, making every possession a struggle for the Buffaloes.

Colorado calmed itself after the second barrage and pushed the lead back to double digits.

"Much better defensive effort the second half," Wayne Tinkle said. "Guys responded out of the locker room. We had better spacing and ball movement in many the second half. It was tough."

A flat start after a first-round bye doomed Oregon State. The Beavers were much better in the second half, but the big early deficit was too much to overcome.

Colorado clicked at both ends in the first half and had to grind through the second. But it's a win and puts the Buffaloes halfway to their goal of winning four games in four days.

Oregon State could end up in a smaller postseason tournament.

Colorado plays Washington in the semifinals.