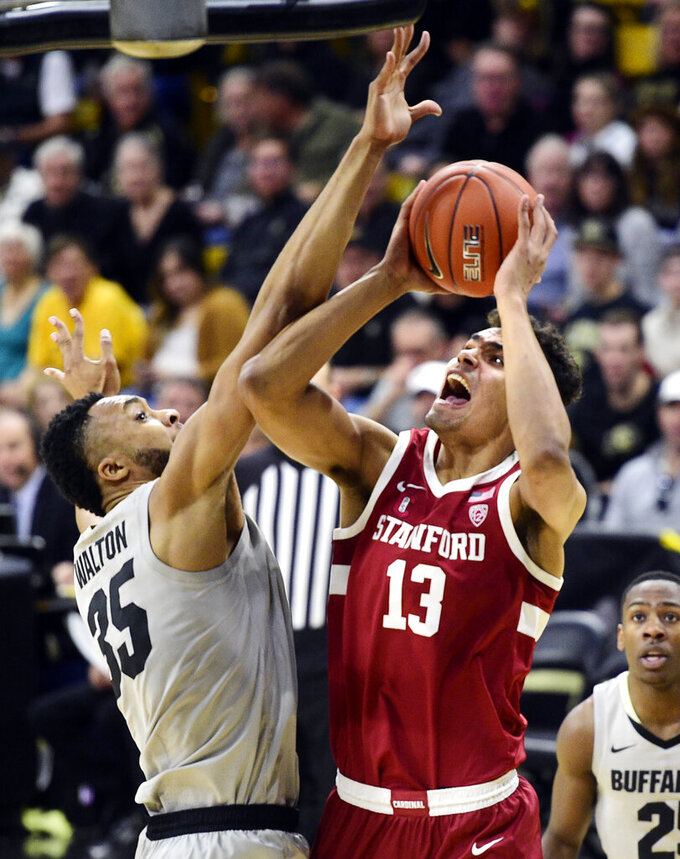 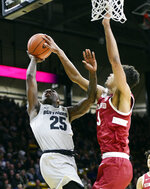 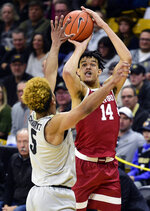 BOULDER, Colorado (AP) — A classic comeback by Colorado, a five-point play by Stanford, a valiant effort by the short-handed Cardinal and an historic start by the 24th-ranked Buffaloes.

All of that was overshadowed by the unity the teams showed after a scary scene in which Stanford leading scorer Oscar Da Silva slammed his head on the floor while trying to prevent a breakaway basket by 262-pound Colorado center Evan Battey.

"Being with another team like that in the middle of a game? I think it was pretty cool that the other team showed a lot of affection, a lot of emotion when Oscar went down," Stanford's Jaiden Delaire said.

Da Silva needed several stitches to close a deep cut above his left eye and missed the rest of the game, which Colorado won 81-74, storming back from a 16-point deficit in the third-largest second-half comeback in the Buffaloes'history.

"Accidents happen in basketball," said McKinley Wright IV, who led Colorado with 21 points. "I've known Evan for three years now, dude has the biggest heart of anybody I've ever met, including my family. I've never met someone with a heart like his, so he didn't do it on purpose at all.

"It was emotional, because I looked back and was seeing Oscar's head bleeding, his eyes starting to roll back, so I didn't know what happened. I got down on my knee and said a prayer."

At first it appeared Battey was also injured on the play, but the sophomore forward who had a stroke two years ago said he was just emotional.

"I wasn't banged up at all. The fact that I had my eyes closed running up, I think I elbowed him in the face. But I just saw his reaction, I saw the way he was landing, and I just broke down," Battey said.

After several minutes, Da Silva was helped to his feet and taken to get stitches, and a crying Battey comforted several of Da Silva's teammates -- and vice versa at midcout.

"Our coach told both teams that Oscar was going to be OK and he told both teams to compete as hard as they can and just finish up the game," Delaire said. "So he tried to make the other team not feel as bad and give us some encouraging words to continue the game."

After the huddle, Battey also left to get a medical evaluation but returned a few minutes later and played a big role in Colorado's comeback.

"I had to go in the locker room for like five-10 minutes, just kind of debrief," Battey said. "You could see as the game went on, I was still crying, shedding tears. When I made that 3, I was shedding tears as well. It was an emotional game for me the whole way through. I don't know what happened when I was in the locker room, I don't know how we played after that, how Stanford played, but all I know is after that, I played for Oscar."

"We just knew we couldn't afford this loss," Wright said.

D'Shawn Schwartz added 20 points for Colorado, and all of Tyler Bey's 11 points and nine of his dozen boards came in the second half when the Buffaloes shot 70% from the floor, 100% from behind the arc and 85% from the stripe.

That followed an awful first half in which the Buffs shot 28% from the floor, 23% from three-point range and 54% from the line.

The Buffs trailed 33-22 at halftime following a five-point swing in the final two-tents of a second of the first half.

Terry fired up a 3-pointer that Eli Parquet got a hand on. Colorado coach Tad Boyle was assessed a technical after Parquet was called for the foul.

Terry sank all five free throws, sending Stanford into the locker room with an 11-point lead instead of 6.

Stanford: The Cardinal was hoping to follow an 80-70 win over Oregon with another victory over a ranked team but Stanford sorely missed Da Silva and starting guard Bryce Willis, who sprained his right ankle in a loss at Utah on Thursday night and didn't play. Willis scored a dozen points in the Cardinal's win over Colorado last season.

Colorado: The strong storm-back will keep the Buffs from falling out of the poll and could serve as a springboard to a strong finish in the Pac-12. The Buffs hit all eight of their 3-pointers in the second half after going 3-for-13 in the first half. And they sank 23 of 27 free throws after going just 7-for-13 from the stripe before halftime.