Column: NIT joins other sports tradition in fading away 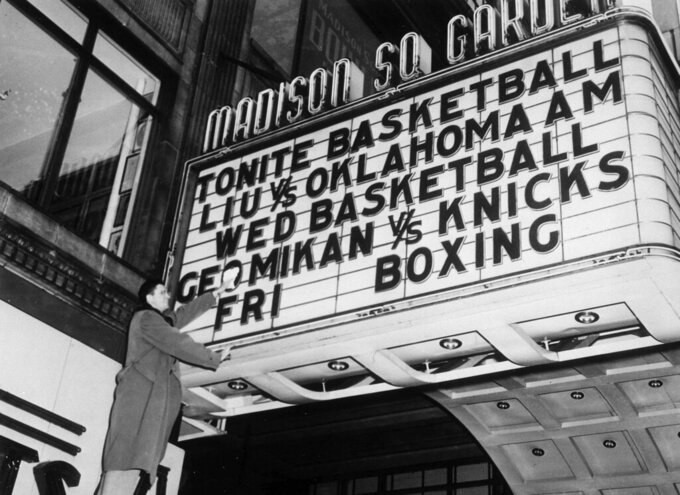 FILE - George Mikan, of the Minneapolis Lakers, polishes off the sign on the marquee of Madison Square Garden in New York, on Dec. 13, 1949. Madison Square Garden won't host the NIT semifinals and championship game the next two years, according to a person with direct knowledge of the decision — ending a college basketball tradition that dates to 1938. The person spoke to The Associated Press on condition of anonymity late Wednesday night, March 23, 2022, because no public announcement had been made. (AP Photo/Jacob Harris, File)

With all eyes focused on the Final Four, it's doubtful that many noticed the passing of a storied tradition in college hoops.

The National Invitation Tournament ended a run of more than eight decades at New York City's Madison Square Garden — actually, two different versions of the Garden, if you wanna get picky — with Xavier's 73-72 victory over Texas A&M.

“Madison Square Garden is a special court,” Xavier's Jack Nunge said. “Everybody knows the feel when you’re playing out there and you just want to give it your all — all the history that’s there."

But all that history wasn't enough to keep the NIT at MSG.

The semifinals and championship game will move to another, still-to-be-determined city for at least the next two years, and there's no word on whether the final rounds of the consolation tournament will ever return to the Big Apple.

While the NIT has largely faded from relevance in recent decades — attendance for Thursday night's game was a paltry 3,551 — there was actually a time when it was a bigger deal than the NCAA Tournament.

Marquette coach Al McGuire turned down the NCAAs in 1970 because he was unhappy with where his team was assigned to play. He accepted an NIT bid instead — and his team captured the title.

Now, as the largely irrelevant NIT prepares to leave NYC, we're reminded once again that sports — like life itself — never stays the same.

Just look at these other traditions that went by the wayside, with nary an April Fools' Day joke in the bunch:

Until Game 4 at Pittsburgh's Three Rivers Stadium in 1971, all World Series contests were played during the day, leaving plenty of time to get to dinner for the early bird special. While most everyone bemoans the late hours that plague today's Fall Classic, especially those who live on the East Coast, there's no chance of the networks giving up their prime-time slots.

The 24 Hours of Le Mans once featured a chaotic start like no other in auto racing. The drivers would line up on the opposite side of the track and sprint across the tarmac to hop into their cars. Obviously, this wasn't the safest way to begin an endurance race, especially when some drivers didn't take the time to buckle up or close their doors properly. It was dropped after the 1969 race.

CAN YOU SAY ABA?

Before the major U.S. sports leagues expanded to basically every city with more than three Starbucks, rival leagues popped up every few years to take on the big boys. Three different American Football Leagues challenged the NFL before the fourth incarnation forced a merger, giving us the spectacle known as the Super Bowl. The NBA and NHL both endured costly fights with upstart organizations before finally taking in some of their teams to shut down the competition.

COLLEGE KIDS VS. THE PROS

A longtime tradition that's downright impossible to fathom in today's times was the Chicago Charities College All-Star Game, which ran from 1934-76 and pitted top college stars against NFL champions. Attention waned as the pros won the final 12 meetings, the last of which was called off late in the third quarter because of a torrential downpour and fans storming the field with the Super Bowl champion Pittsburgh Steelers leading 24-0.

WHILE WE'RE ON MEANINGLESS GAMES ...

The men's NCAA Tournament, for no good reason, once featured third-place games at both the regional finals and the Final Four. The last of these was played in 1981, with Ralph Sampson's Virginia Cavaliers defeating LSU 78-74 at Philadelphia's Spectrum before Indiana's victory over North Carolina in the game that actually mattered for the national championship. In this same vein, the NFL held a third-place game (known as the Playoff Bowl) throughout the 1960s to benefit the players' pension fund. Green Bay Packers coach Vince Lombardi derisively called it “a losers’ bowl for losers.”

Before pay-per-view and streaming services, boxing's biggest fights were available only via closed circuit at movie theaters and other large venues. More than 50 million worldwide reportedly watched Muhammad Ali upset George Foreman in 1974's “Rumble in the Jungle.” Now, no one has to leave their recliner.

The Winter Olympics used to be held in the same year as the Summer Games, but that format ended after Albertville, France, and Barcelona, Spain, hosted in 1992. The 1994 Lillehammer Games were the first to held in a different year than the summer spectacle, so now we have an Olympics to watch every two years instead of four.

While no one misses the days when the national champion was determined by a vote of journalists and coaches, we're still a bit nostalgic for New Year's Day being the pinnacle of the college football season. In 1978, all four major bowls were held hours apart (actually on Jan. 2, to avoid a conflict with NFL playoff games). Here's what happened: No. 5 Notre Dame shocked top-ranked Texas at the Cotton Bowl; No. 3 Alabama won the Sugar Bowl; No. 4 Michigan was upset in the Rose Bowl and No. 2 Oklahoma was routed in the Orange Bowl. When the dust settled, the Fighting Irish were voted national champs.

STYMIED ON THE GREEN

Here's one we'd really like to bring back: the stymie. Before rule changes in 1938 (and a full overhaul in 1952), golfers were prevented from marking their ball on the green. In other words, a player's putt might be blocked — or stymied, get it? — by an opponent's ball, which led to some very creative uses of the short stick. We'd love to see Rory McIlroy have to chip a putt to reach the cup.

Finally, is the Davis Cup still being played in tennis? How about the America's Cup in sailing? Apparently so, but neither carries nearly the weight it once did in the sporting world.

Nothing stays the same.

Paul Newberry is a national sports columnist for The Associated Press. Write to him at pnewberry(at)ap.org or at https://twitter.com/pnewberry1963