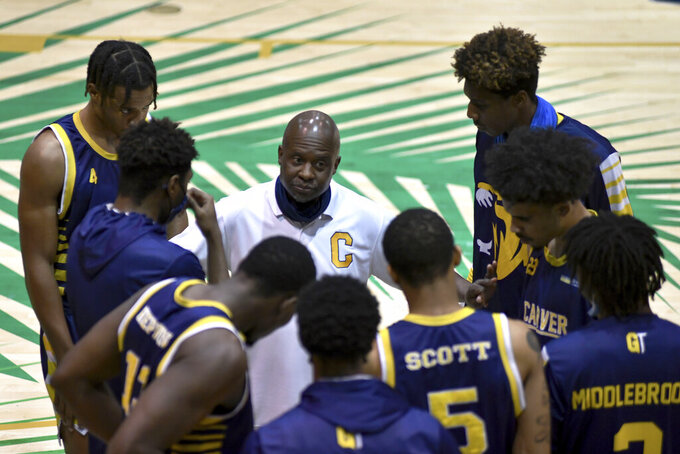 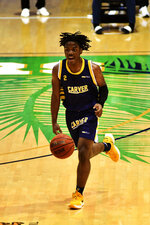 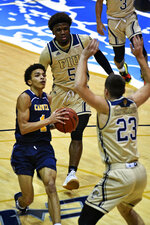 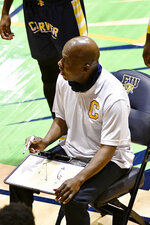 ATLANTA (AP) — Carver College has become college basketball's equivalent of the Washington Generals, barnstorming from city to city, playing games almost every night, enduring one enormous beating after another.

Yet there's one big difference between the Cougars and that hapless foil of the Harlem Globetrotters.

Carver always takes the court expecting to win, even though there's virtually no chance of that happening unless the other team fails to show up.

“I don't have that mindset,” says the team's eternally optimistic coach, Bryan Spencer. “This is competitive sports, man. It's about winning. It's about competing. I never go into a contest expecting to lose.”

But Spencer is also a realist.

Most Atlantans have never heard of Carver, myself included — and I've lived here most of my life.

“I hadn't heard of it either, honestly,” concedes point guard Glenn Sims, who grew up in Atlanta.

In this most atypical of seasons, tiny Carver has emerged as perhaps the most unique team of all — the pandemic converging with the Cougars to produce a slate of hopeless games for a team that never loses hope.

With NCAA Division I teams facing cancellations on an almost daily basis because of COVID-19 and desperate to schedule as many games as possible, often with little notice, Carver has stepped into the void as a willing patsy.

They collect a check and gain what Spencer believes will be much-needed exposure, valuable experience and a lifetime of memories.

Never mind that the Cougars are members of not the NCAA but the NCCAA — National Christian College Athletic Association — a collection of tiny schools that don't have anywhere close to the resources needed to compete against mid-majors like Georgia State, Florida International and Liberty.

Spencer recognizes the unique position his school is in, one that may never come around again. Even with the virus raging — and, yes, it's stricken some of his players — he believes it's worth the risk.

He'll pick up the phone for pretty much any team that calls, willingly sending his team into games that are roughly akin to the Christians vs the Lions in ancient Rome.

The Cougars have already played 15 times, all of them on the road, losing every one by an average of nearly 59 points.

Their best showing was a 35-point setback to Charleston Southern. More typical was their most recent outing, a 111-34 blowout at Florida International on Monday night.

Then again, they must've been exhausted. The Cougars were playing for the fourth straight night, and the seventh time in eight days, shuttling in two school vans over a vast expanses of the South stretching from Lynchburg, Virginia to Miami, Florida.

At least they've got a few days off over the Christmas holiday.

The Cougars' next game is Sunday at Jacksonville State of the Ohio Valley Conference.

Chances are, it will be another mammoth loss.

“I go in understanding the odds we’re against,” Spencer says. “But the lessons we're getting are totally invaluable. And I really believe — I know — that if we can close the gap in physical maturity, some of these scores you're seeing, they're gonna flip.”

He chuckled just a bit, adding a quick caveat.

“I'm not saying we're going to beat them by 60 or 70 points,” Spencer interjects. “But we truly believe we can beat these teams some day.”

His players sure seem to be enjoying the ride. Granted, it's no fun getting pulverized night after night, but most of the games are being carried on ESPN's streaming service, so friends and family are getting to see them play.

“It's really been a blessing in disguise,” Sims says. “We're getting to play a schedule that not many people get to play, especially at our level."

This Bingo Long of a season has already produced a trove of humorous anecdotes.

Just the other day, Spencer couldn't find the keys to one of the vans before the team departed Atlanta for the 6 1/2-hour drive to DeLand, Florida to face Stetson.

Turns out, they were in his bag all along, but the delay in getting away meant the team didn't even have time to check into its hotel before the game. The Cougars drove straight to the arena (and were beaten 95-52 in one of their better showings).

Sims chuckled at how Spencer got a call while the team was on its way to the next game, which resulted in the coach sheepishly telling his players via group text that he'd just added more games to the already brutal schedule.

“It's kind of like a recurring joke,” Sims says. “He'll just throw in at the last second, ‘OK, guys, we’ve got another game.”

Carver was founded in 1943, but the basketball program has only been around for about two decades.

It was the brainchild of the late school president Robert Crummie, who wanted to use the team as a religious outreach for young Black men.

“He called it his second-chance ministry,” Spencer says. “He was looking for guys who could play basketball but maybe had gotten off on the wrong path. He just wanted to give them an opportunity to play the game they love, and also give us the opportunity to reach them. We're a Bible college. We have a chance to reach them spiritually.”

Now that the word is out, Spencer is getting several calls a day from schools that are eager to beef up their depleted schedules with last-minute games.

Every one that Carver plays bolsters its bottom line, if not its record.

The program is entirely self-supporting, with no money coming out of the university’s extremely tight budget. Spencer is the only paid coach, though he does have two volunteer assistants. The team's facilities are decrepit: a puny gym with a parquet floor that desperately needs replacing, though that hasn't been much of an issue in a season where the Cougars have yet to play a home game and there's hardly any time for practicing.

Spencer does worry that the enormity of the losses — 10 of them by more than 60 points — will take a poll on his young team, which counts seven freshmen on its 11-man roster.

He's not as concerned about the virus, saying his team has to get tested at least three times a week to ensure opponents that it's not spreading COVID-19 around the country.

“The scary part about doing this,” Spencer says, “is destroying their mental confidence and psyche. But myself and our coaches think we're doing a very good job of keeping the guys motivated and hungry and understanding of the big picture that's going on.”

Indeed, the players seem to get it.

“It's not discouraging at all,,” said Paul Hepburn. the team's tallest player, a 6-foot-9 native of the Bahamas.

Really? Not at all? “We don't look at it that way," Hepburn insists.

Spencer is constantly reminding his players that basketball is merely a game they love playing. It doesn't define who they are as men. He also points out that life's most valuables lessons generally come from adversity, not triumph.

If that's the case, these guys should do well in life.

“The reason our guys play so hard on the court is nobody else would give them a chance,” Spencer said. "Once they get here, it's family. It's love. It's not just an experience, it's true love. That's what they get at Carver College.'

Then he adds the most important message of all.

“It's not the end of the world when we lose.”

Paul Newberry is a sports columnist for The Associated Press. Write to him at pnewberry(at)ap.org or at https://twitter.com/pnewberry196 His work can be found at https://apnews.com/search/paulnewberry