Column: What will fans talk about without sports? 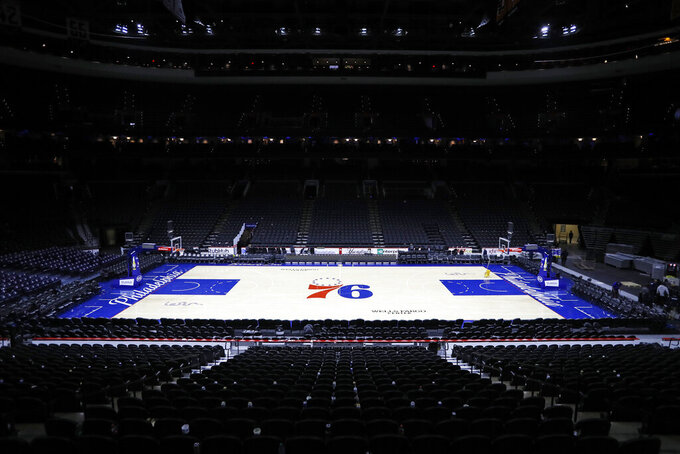 The empty court is seen at the Wells Fargo Center after an NBA basketball game between the Philadelphia 76ers and the Detroit Pistons, Wednesday, March 11, 2020, in Philadelphia. (AP Photo/Matt Slocum)

Going a week without watching sports used to be a dare. It’s the new reality.

A quick glance at today’s TV sports listings provides all the confirmation you need. It looks like the departure screen at the airport during a blizzard:

Efforts by sports leagues to contain the spread of the virus have become one more way to track the impact of the outbreak around the globe. The closer the event was to a cluster of cases, the more likely it was to be played in front of empty seats, canceled or about to be. After several weeks watching from what seemed like a safe distance, sports fans in the United States are waking up to see those red pins scattered across their maps.

On Thursday, conference basketball tournaments stretching from the Atlantic to the Pacific hung a “Sorry, We’re Closed” sign on the door. The NBA, NHL, MLB and MLS did the same. The last likely major college basketball game of any import to be played, a Big East tournament contest between St. John’s and Creighton at Madison Square Garden, was abandoned at halftime Thursday.

“Bizarre. We shouldn't have been here today," said St. John's TV analyst Brandon Tierney. “There's no other way to put it. We had enough information last night when we went to bed.”

Now picture the poor person who crawled off the couch just before intermission to make a quick lunch, then returned to find a blank screen. The rest of us will be wearing that same expression soon enough.

If the idea of self-quarantine held any allure for sports fans, it was the chance to binge-watch March Madness and Opening Day in baseball. Good luck with that. Televised games are about to become as scarce as toilet paper at Costco.

There were still three notable holdouts as of midday: pro golf, NASCAR and the English Premier League maintained they would continue to play, albeit without spectators. For the moment, this summer’s Tokyo Olympics are on, too.

The simple fact is TV deals provide so much of the money fueling big-time sports that it makes economic sense to put the games on people’s screens whether there are actual fannies in the seats or not. How much longer it passes the safety common-sense test remains to be seen. Athletes from leagues and sports everywhere have already tested positive for COVID-19, and that list only going to get longer.

“We were fortunate in the U.S., at least up until now,” said Marc Ganis, president and founder of Chicago-based Sportscorp, a leading business consulting firm with deep ties to Chinese sports dating back more than a decade.

“But just like the rest of the world, it’s going to be a case-by-case decision for sports leagues here, at least until we know a lot more about the virus,” he added. “A lot will depend on where they try to play. ‘Hot spots’ and really, any hard-hit area is too risky. And they’ll be hemmed in by government mandates elsewhere on top of that.

“It’s like trying to put together a jigsaw puzzle,” Ganis concluded, “without having all the pieces.”

Just don’t waste much time worrying about the owners or players. They’ll be fine. Most will welcome the opportunity to take a few weeks off. The real harm being done to sports at the moment is happening on the fringes, to folks who eke out a living selling beer in the arenas and parking cars near the stadiums.

And if you’ve got any sympathy left after that, well, save it for the fans.

Being able to argue about sports with your crazy relatives — as opposed to say, politics — has kept many a family dinner from spiraling into a food fight. Fathers and sons or daughters who don’t talk all that much during the rest of the year swap text messages during March Madness or the World Series like BFFs. It’s small talk, granted, but also one of these things, as Joni Mitchell put it, “That you don’t know what you’ve got ‘till it’s gone.”

Gone, too, for now, will be those moments so thrilling or outlandish that they connected complete strangers: Zion Williamson tearing through his shoe in a Duke game; Kawhi Leonard’s buzzer-beating 3-pointer bouncing on the rim four times before falling through to seal a Game 7 win for the Raptors; Howie Kendrick’s grand-slam HRs finishing off the underdog Nats’ postseason run.

There are plenty of things more important to be concerned at the moment about than sports. Pay attention to those. But the mind likes to wander and with the Masters only a month away, just imagine where some of Tiger Woods’ drives will wind up at Augusta National without the galleries lining every fairway.